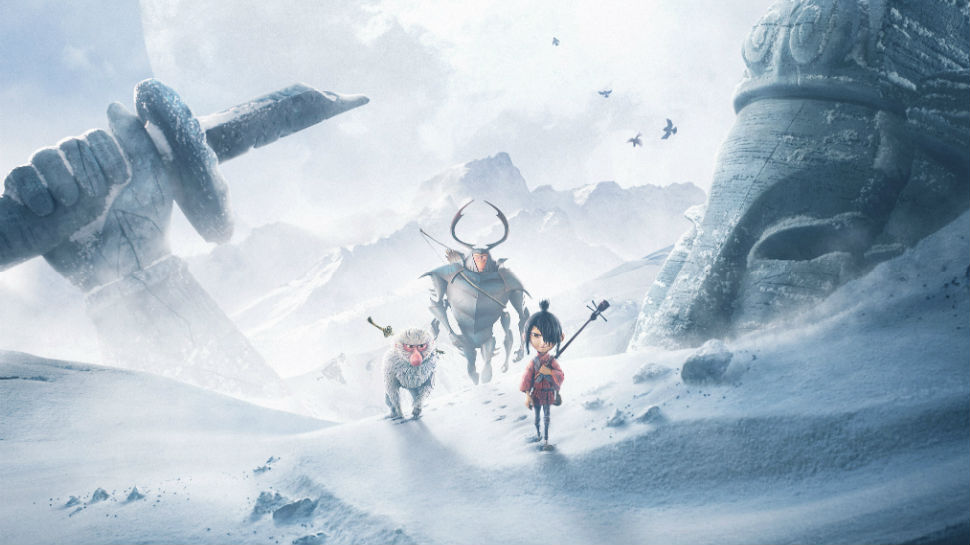 If you need to blink, do it now. This is going to be a long story, and your eyes will miss much of it. Fair warning though, it’s a three part deal, with a movie review, a plea for original ideas, and a goodbye to a friend all in one. It all starts with a song, and an idea.

Let’s start with a trailer.

The trailer for Kubo and the Two Strings stirred so many emotions in me. The music alone was enough to bring tears. It’s a great take on the Beatles’ “While My Guitar Gently Weeps”, and it fits the movie perfectly. The story is about a boy who cares for his mother, tells stories, and can do magic. It’s something my dearest Keeper and I would probably call a perfect storm for our inner geeks.
The story starts with Kubo telling the tale of how him and his mother come to be, and how his grandfather stole his eye. The tale goes on and we meet Monkey, and Beetle. There’s magic, there’s monsters, and it’s all done in amazing Stop-Motion animation…you know, like Nightmare Before Christmas. Actually, it’s a pretty good mix of Stop Motion and CGI.

Is it any good? Yes, it’s flat out amazing, and I regret waiting two months to see it in theaters. It’s one that needs to be seen on a big screen, in 3D if you can, and it needs repeat viewings. Unfortunately, it will disappear from theaters very soon, as the fall Oscar contenders make their bow.

So, why write a review for a movie that came out two months ago? Well, for one you need to see it. We live in a time where we are inundated with sequels, reboots and retreads. You (collectively) complain about it, but you still go. This story isn’t based on a book, it’s not a sequel, a video game or a Japanese cartoon. It’s an original idea, filled with original designs. Yes, the story and the designs are derivative of other films and stories, but the story is what grabs you in. From the title, down to the end of the film when you realize what the movie is really all about.

One thing that we have always preached here on BTT is the core of the story. Our late Keeper wrote entire essays on the importance of story in theme park attractions. We argued over it, and in the end it was one of the MANY things that made him decide to part ways with us. Consequently, Keeper is very much alive and well, living out his days by shaking his aged fists at kids who dare to step on his lawn and talk about how much better things were “back then”.

But Keeper is right, story is integral in everything that we do, and it’s extremely important when dealing with theme parks, and in this case movies. What is a story but a way of transporting ourselves into someplace else? That place can be bigger, more fantastical, or even within ourselves. The Story can even inspire us to do different things. The story can inspire us to create our own stories, or to do a certain profession. The Story can make us realize things about ourselves, and make us either change or try to be better people…or worse. The Story is what brings us all together, whether huddled around the campfire, in your dining room over dinner, or staring at a “Silly Little Blog” for over eight years (thanks Jill). The Story is pretty much everything, and if it’s told right, it’s shared and retold and brought into new generations. In a way, remakes and retreads are true testaments to how good that original story was, even if we’ve seen it a million times and hold a special place in our hearts for it. While those stories are great, and deserving of fresh eyes looking at it, there are still new stories to be told.

So, with Kubo and the Two Strings, a new story is told. It’s told in a way that is entertaining and beautiful. And it creates a world that we have rarely seen, in a medium so rarely done right.

The monsters are of course a call back to the monsters of the old Harryhausen films, only they fit the world of Kubo better than they fit in the world of the movies back then. Kubo is a story that comes to life from one of Laika’s own, based on the experiences he had as a kid, while tagging along with his dad to Japan. Again, it’s about the story.

This isn’t the first time that Laika has taken a shot with an original idea, they did a kind of “Supernatural Goonies” take with ParaNorman in 2012. While that was a great film, Kubo feels like it falls into all the places it needed to. It’s more grown up, while being aimed at kids. It is clever, with a hint of comedy, and a little bit of scariness to it. It’s also way better than most of the animated films that have hit this year…including the much loved Finding Dory. Hopefully it will find love this awards season, but with big films like Dory, and Moana on the docket, the best we can hope for is a solid following on home vid…err…dv…at home.
Still, if you get the chance, and you want something that is a great family film, with an original story, there is still time!

After all, stories are how we keep bringing you here.