Dollywood evacuated due to Tennessee Wildfires

Devastating news from Tennessee as wildfires have threatened many resorts and attractions right on the foothills of the great smoky mountains. 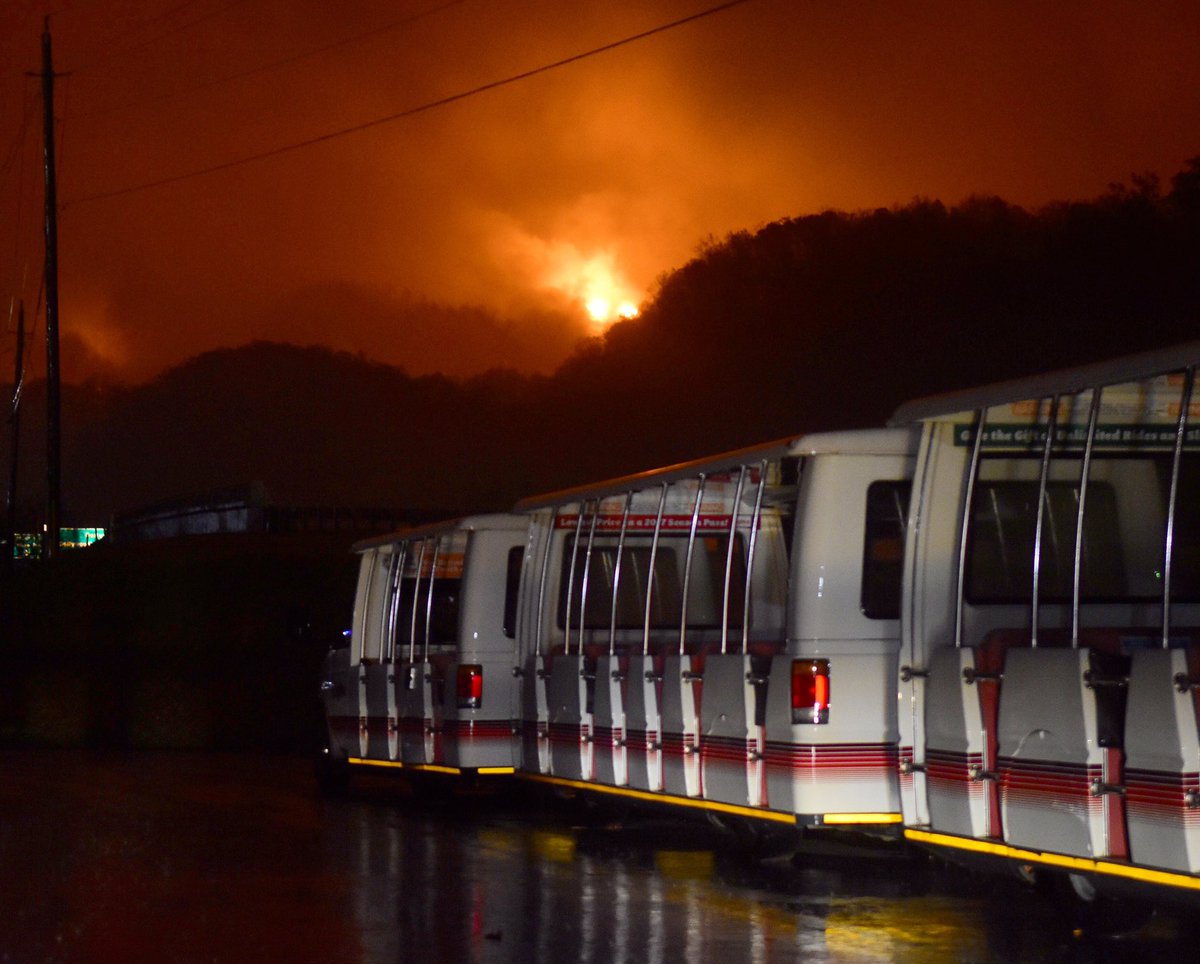 A view from the Dollywood Parking lots of the Tennesse Wildfires

Guest cabins at Dollywood have been evacuated amid mandatory evacuations in the Pigeon Forge and Gatlinburg areas due to raging wildfires nearby in Tennessee, according to a representative for the resort and the Tennesee’s emergency management agency.

Pete Owens with Dollywood said 19 cabins that were occupied within Dollywood Smoky Mountain Cabins were evacuated early Monday evening and that they evacuated guests from 50 rooms in Dollywood’s DreamMore Resort. Fire crews are in the park and are taking preventative measures to ensure all structures are intact at Dollywood. No structures are on fire, and that no persons have been injured.

In Gatlinburg,Hillbilly Golf, the Park Vista Hotel, a 16-story hotel are among at lease thirty structures that including businesses and homes that have been destroyed in these wildfires. Sara Gentry, director of sales at Westgate Smoky Mountain Resort in Gatlinburg, said several hundred people were evacuated from the hotel and that the number of evacuees likely would have been higher had it been the weekend.

Ripley’s aquarium also has been evacuated and was forced to leave 10,518 animals behind as the fire got close to the aquarium. The aquarium has taken safety measures to make sure the animals are not harmed or suffer from smoke inhalation. Ryan DeSear, General Manager of the aquarium said to one of the local stations that as long as the building had power and didn’t catch fire, the animals should be safe. DeSear said that when everything is functioning normally, the animals can survive for 24 hours without human intervention and that the clock would start ticking as soon as the power goes out. As of midnight Tuesday, the building was still standing and all the workers were evacuated.

Heavy Rains hit the affected areas during the overnight and have helped the firefighters on the scene fighting this blaze to knock it down and get the wildfire under control.
Update

We are starting to see some of the aftermath of the fires, as some attractions are being reported to be completely destroyed. 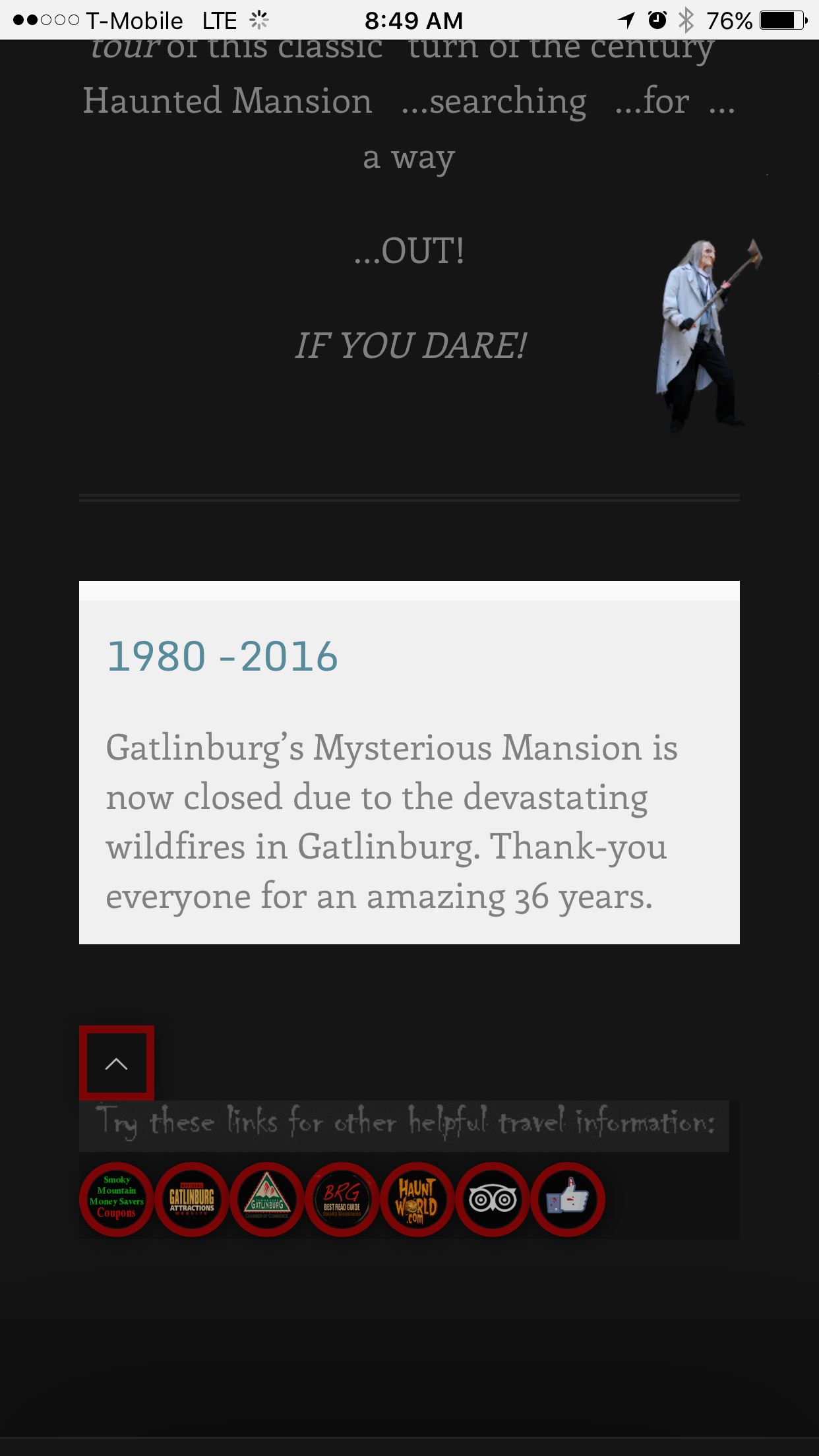 One of the signature haunted attractions in Tennessee, the Mysterious Mansion has confirmed that it is now closed for good due to the fire. They confirmed on their official website that they are now closed after 46 years due to the wildfires.

The Haunted Attractions Association Facebook page has also posted a picture of the damage.

Very sad news, as the fire is expected to spread to other attractions.

Our thoughts and prayers go out to those affected by these wildfires. Stay tuned to Behind the Thrills for more on this story.

Stay tuned for more from Dollywood and Ripley’s Aquarium, and be sure to get social with us on Facebook and follow along with us on Twitter @BehindThrills for the latest updates!