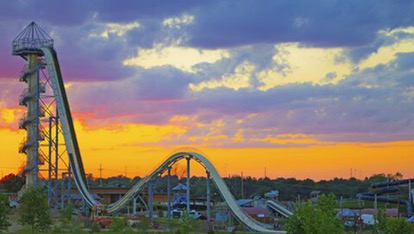 It’s a sad ending to a tragic story. Tuesday, Texas based Schlitterbahn announced that the worlds tallest waterslide, Verruckt, would remain closed. The slide will also be removed.
Earlier this summer, a 10 year old boy was nearly decapitated when the raft carrying him and two women went airborne. The boy struck a rail that contained netting, and was killed.
The park closed for a few days, but when it reopened it was without Verruckt. The slide will be dismantled after all investigations are complete. Attorneys working for the two women said that they want the slide taken down, and all pieces destroyed.
The park released a statement via Facebook about the decision:

“All of us at Schlitterbahn have been heartbroken over the tragedy that occurred on Verrückt. In our 50 years of providing an environment for families and friends to gather, we’ve never experienced this kind of devastating event. The safety of our staff and our guests is our top priority. We are parents and grandparents ourselves and many of us have ridden Verrückt with our own children and grandchildren over the years it operated.”
“Once the investigation is concluded and we are given permission by the court, Verrückt will be decommissioned – closed permanently and the slide removed from the tower. In our opinion, it is the only proper course of action following this tragedy.”
“We will, at some point in the future, announce what will be built in its place.”
“We continue to fully cooperate with investigative teams and work with the families, their attorneys and our staff impacted by this accident. As we move forward, we assure everyone who works for us and the community: we remain wholly committed to our Kansas City park and the original vision of Schlitterbahn – providing a great place to work and an environment for families and friends to gather together. “

Honestly , it doesn’t matter what’s put there, it’s always going to be known as the spot where Verruckt was. It’s an unfortunate result of the catastrophic accident.