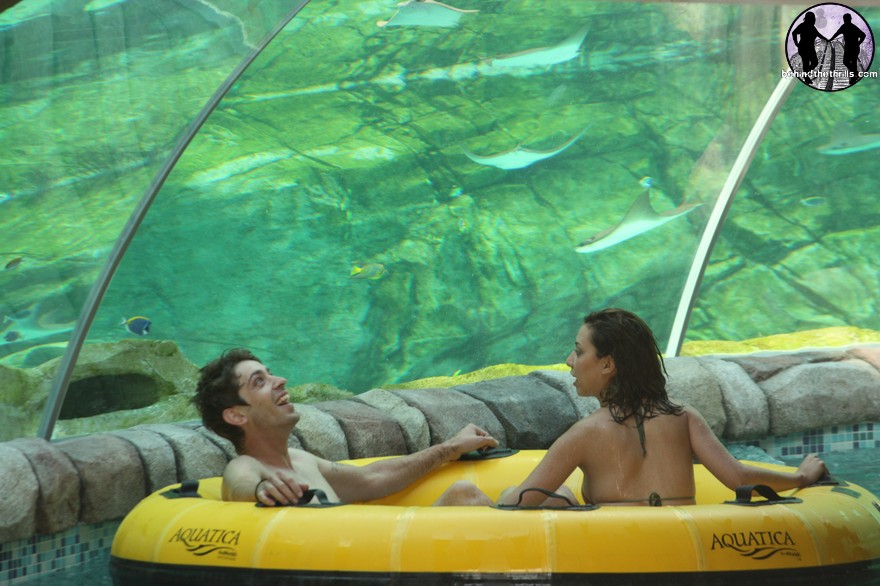 Volcano Bay towers over Universal Orlando, with eruptions spraying over the newly minted water theme park. There hasn't been a day this summer that the park hasn't reached capacity, forcing closures. Disney's Typhoon Lagoon is seeing a surge, thanks in part to a massive new family ride, Miss Adventure Falls. Even the long forgotten Blizzard Beach seems to be getting a long overdue update, with construction walls going up and land being cleared close by. But there's one park that no one seems to be talking about. Where's Aquatica Orlando?

SeaWorld's Waterpark seems to be getting forgotten about as the world talks about everything happening around it. Even the ultra-exclusive Discovery Cove seems to be getting a lot more attention than Aquatica, which was once billed as the most unique waterpark in the country.
The park opened in 2008 with a lot of fanfare, as guests could "play next to the sea" with animal attractions that put you into a world where you could splash beside animals that you just don't see every day.

The signature attraction allows guests to rocket through the habitat of Commerson's dolphins. You can also enjoy the lazy river, and get a slower look at the dolphins. There's also a huge aquarium area to get a better look, and throughout the day trainers give talks about how the dolphins interact with each other and with guests.

There's also a freshwater reef in the same lazy river that allows you to get up close and personal with tons of fish. Besides these two animal attractions, the park has some smaller up close attractions.

In 2010, the park opened Omaka Rocka. The slide is a single rider tube slide with a funnel and several drops and turns. In 2014, the park opened up their latest attraction with Ihu's Breakaway Falls. Instead of going with an animal attraction, the park decided to go for a more thrilling attraction and added a series of slides with a "breakaway box". Essentially, riders get in a tube and the floor drops out from underneath them.

While we won't know until next year what kind of impact, if any, the new Volcano Bay and Miss Adventure Falls will have on Aquatica, it's time for the park to make a big statement. The park needs a new, and pretty groundbreaking attraction if it's going to get back in the spotlight. This year the park opened a special passholder area for their annual passholders. But the passholders aren't the issue. How does Aquatica get the attention away from a giant volcano and animatronic parrots? They go back to their roots.

Aquatica is one of the most unique waterparks in the world because of their animal connections and interactions. What the park is missing is more of that animal connection.
A long standing rumor suggests that a new attraction could bring just that, as the park is looking at expanding.

What would bring in guests by the flocks? How about a flock of stingrays, or a school of sharks? At Aquatica San Antonio, the second Aquatica park, guests slide down a massive tube that empties into a gorgeous underwater tunnel filled with stingrays and tropical fish.

An updated version of Stingray falls would be a great addition to the park. The ride is family friendly, and offers a unique view of animals that most people don't get every day. Aquatica Orlando could also do a variance on the Texas ride with an updated version, featuring other animals besides stingrays. Sharks could be a great thrilling element to the attraction, and would also tie in with SeaWorld's shark conservation efforts. The park opened Make in 2016 and has teamed up with Guy Harvey to help bring attention to the epidemic of finning that is killing millions of sharks. The new attraction could help ease a little tension with sharks, and could make for an amazing family ride experience.

Keep in mind that this is not what the park is doing, but merely a suggestion on our part. It would be likely that Aquatica will answer Volcano Bay with a new attraction, and if it does, the animals are the key to making a unique experience at the top of every vacation plan. That's how you get people away from Volcanoes and animatronic parrots, by giving them something unique, thrilling and at the same time truly family friendly.

Apparently the park is planning a huge expansion for their 10th anniversary next year. We don't know exactly what yet though, but early rumors say it's going to be an animal based attraction. The park is also going to celebrate 10 years in a big way.

Stay tuned for more from Aquatica,  and be sure to get social with us on Facebook and follow along with us on Twitter @BehindThrills for the latest updates!

For more information about Aquatica Orlando, including tickets, visit the official website by clicking here!

TAG2018 attractions Aquatica Orlando SeaWorld Orlando
Previous PostCult of Chucky and more terror being unleashed at Halloween Horror Nights Japan Next PostHarry Potter interactive experience coming to a mall near you this Christmas!