Knott’s Scary Farm is celebrating it’s 45th year of terrifying Southern California with 9 mazes, 1000 monsters, 4 scare zones, 2 shows and so much more. This year is the first year under the complete supervision of entertainment director Ken Parks and this is the best Knott’s Scary Farm has looked in years, if not ever. The event is consistently changing, despite the fact that you’ll find most of the same mazes year after year. The most drastic changes have come over the past 4 years when Jon Cooke was introduced as a maze designer and introduced the super popular and video game like experience of ‘Special Ops: Infected’. Since then Knott’s has shifted focus from just standard walk-through mazes/houses towards interactivity and individualizing guest’s experience. This is the longest running haunted event in the world and we’ve come to expect innovation from the creative team. Each year they manage to top themselves. 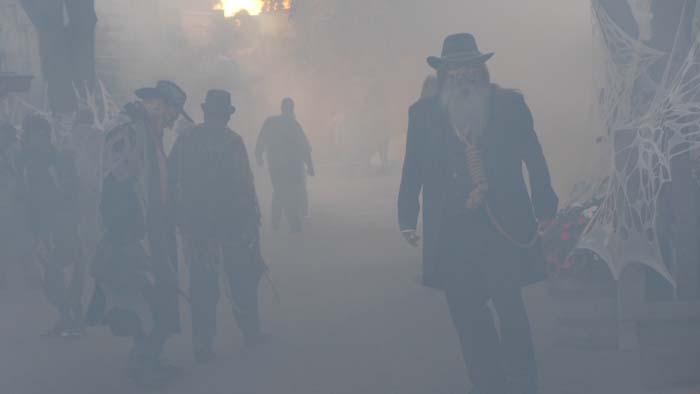 What makes this year deviate from prior is the increased emphasis on the scare zones. While the talent at Scary Farm has always been amazing, the lack of any props (in order to not frighten guests during day time hours) has always left me wanting more. The idea of hiding Scary Farm from day guests is finally behind us and we are starting to see physical, large scale props that add so much to each of the 4 zones, Ghost Town, Carnevil, The Hallows and Fiesta De Los Muertos. We also saw the introduction of a new mini-show held within the Hallows, the Burning of the Wicker man where at midnight each night, witch tribes come together and burn a large wicker man statue. Mini-shows like this were a big part of Knott’s early years so the re-introduction of them is more than welcome.

Dark Ride – What I’d consider one of the best mazes in Scary Farm history, possibly the best of any SoCal-based haunt this year. Dark Ride plays tribute to the iconic over the top beach boardwalk style haunted dark rides. Situated perfectly within the boardwalk section of the park, park guests queuing in line are led to believe they’re in line for the “Castle of Chaos” dark ride but as you inch closer to the attraction you find out things are not as they seem. The attraction ends up being abandoned and clowns, carnies, squatters and freaks have taken residence within the glitchy, malfunctioning show scenes of the attraction. Inside you walk the literal path of the ride taking detours through maintenance sheds, prop rooms, and behind the scenes walkways. The concept is brilliant, and a natural fit for Scary Farm. If you plan on visiting I highly recommend doing this maze multiple times as you’ll find new details, and easter eggs to past theme park attractions from Knott’s and other parks as well.

Pumpkin Eater – The second new maze comes from the mind of Daniel Miller who’s been a designer at haunt for as long as I’ve been attending. Pumpkin Eater is designed to fit within the The Hallows scare zone, similar to how Dark Ride was designed to fit within Carnevil. The maze takes the folk tale of Peter Pumpkin Eater and expands upon it. It’s a high concept which is generally hit or miss with the younger demographic of Scary Farm. Guests going through will either love it or walk out saying “what just happened?”. I find the overall theme to be a little forgettable, it’s not my favorite but it works perfectly within The Hallows and many of the sets are well executed. The production value and the variety of rooms you walk through also makes it visually stimulating throughout. Not to mention the entry way with the old Colonial village is pretty incredible.  Looking forward to seeing how it gets plussed for 2018

Trick or Treat: Lights Out – The third and final “new” maze is Trick or Treat: Lights up. It’s a completely re-imagined take on the classic maze which opened way back in 2012. I’ve always been a fan of the original Trick or Treat despite mixed reactions from the general public and folks finding it un-scary. I enjoyed the whimsical, atmospheric take on a walk through attraction. Well, the good news is that Lights Out takes that concept and cranks it to 11 and makes it possibly the scariest house at the farm. Gone are the house-lights. You are armed with a malfunctioning, fairly dim interactive flash light, and forced to walk through the house in the pitch back. New scenes have been added including a new facade, a backyard scene in the middle of the maze, as well as a new finale/exit. It’s not totally dark as you’ll commonly find atmospheric lighting effects such as candle light, thunder strikes, ect… which is a much appreciated detail. The flashlights add a whole new dynamic to the maze and makes the haunt feel more like “Trick or Treat” than ever before. It’s mazes like this that keep people coming back to Knott’s Scary Farm, the desire to innovate and create new experiences for guests is apparent and this is another must do.

I’m going to blast through the returning mazes since they’re mostly the same as last year. You can find videos of all of them HERE.

Red Barn – I did not like Red Barn last year, the theme felt incomplete and I wasn’t quite sure what was happening. This year, however, I LOVED Red Barn. The additions made this year really added a backstory as to why you (the guests are there). The biggest new addition is a small pre-show staging area at the start of the maze which sets the high paced tone of the maze where you are ran through the pig pens and moved forced through a cage like livestock headed towards the slaughter. A new backstory was also created with captured victims now sporting “Jonestown High School Senior Trip” T-Shirts (where can I get one of those shirts?). The finale was also reworked to have a much more natural and authentic feeling, in addition to the addition of live chainsaws. If you didn’t like Red Barn last you, I suggest you give it another chance this year.

Shadow Lands – Shadow Lands is for the most part the same experience as last year which the layout of scenes being tweaked providing a more natural flow than on its debut year. The biggest new addition was a major reworking of the pre-show. A 2nd pre-show room had been added to increase capacity. The additional preshow cuts the large forest scene from last year in half,  so the path through the Japanese forest has been rerouted in a way that makes it longer than than before. It’s a win-win overall and another great year for this maze. Don’t expect any major differences.

Special Ops: Infected –  Special Ops returns to the Mystery Lodge location for its 2nd year. Much like Shadow Lands only small tweaks and differences from last year. The inclusion of a take in the opening scene is a major plus. You’ll also find more zombies than ever before as well as new interactive targets throughout the attraction. It’s just as fun as its ever been. The line for this maze gets long so it’s highly recommended you make this the first maze you hit of the night.

VooDoo (OoDoov?) – VooDoo is back and the biggest change was the layout of the maze has been reversed. ..It’s a valiant effort? The talent in this maze is always amazing and the reversed layout is interesting, but doesn’t really improve or add anything to the overall attraction. Not to mention the incredible New Orleans French Quarter facade is now completely overlooked and missed by most guests. The maze is still beautiful, and the production value is still out of this world. It’s just starting to show its age. I assume this will be the last year of Voodoo, for that reason alone you should check out it.

Tooth Fairy –  The Tooth Fairy is also back, much like Voodoo it is starting to show its age. The biggest change this year was a new finale scene where you’re face to face with the children who have been captured and chained to their beds as part of her display. It’s still by far the goriest maze at Scary Farm, and the transition from the child’s bedroom to the Tooth Fairy’s lair is still one of my favorite moments in a KSF maze. Other than that it’s the same house that’s been there for the past 4 years. I also assume that this will be the last year of the Tooth Fairy.

Elvira: Mistress of the Dark – Elvira is back for her final year at Knott’s Scary Farm and this may just be the best show she’s ever done during Scary Farm. It pays homage to her cult film featuring many moments, and characters (including the macabre mobile itself). Not to mention Elvira still rocks it in every way. The songs are all catchy, the dancers are hot, and fans of the Queen of Halloween will adore every moment of this production.

The Hanging: Fake Noose – Knott’s anti-PC, super-offensive show, The Hanging, is back and it’s just as great as it’s ever been. While other parks seem to be dialing back on their levels of offensive humor, Knott’s once again takes it to the next level. This year’s show primarily takes aim on the relationships between the President, Putin and North Korea resulting in some hilarious, head scratchingly funny and bizarre moments. This show isn’t for everyone and takes aim at both political parties and both conservative and liberal ideals. It’s a bit politically heavy, but given the past year that’s where most of the easiest things to make fun of are sourced. It also takes aim at the over abundance of Super Hero movies over the past year and pop culture in general. Much like Elvira, it’s one of the best Hanging shows we’ve seen this decade.

Overall – Knott’s Scary Farm is amazing this year. For the 11 year I’ve been attending, it’s by far the best its ever looked and the line up of mazes is all good. The scare zones have had new life breathed into them this year and the shows are both equally entertaining and worth your time. The production value in most of the mazes are some of the best you’ll find in the industry and the interactive mazes, Trick or Treat and Special Ops are things you will not find at other haunts, especially not with this level of production making Knott’s unique in its own right. It’s a must do for haunt fans no matter where you’re located and remains one of our favorite events of the year.

For more information about Knott’s Berry Farm or to purchase tickets (which are available now), visit the official website by clicking here.