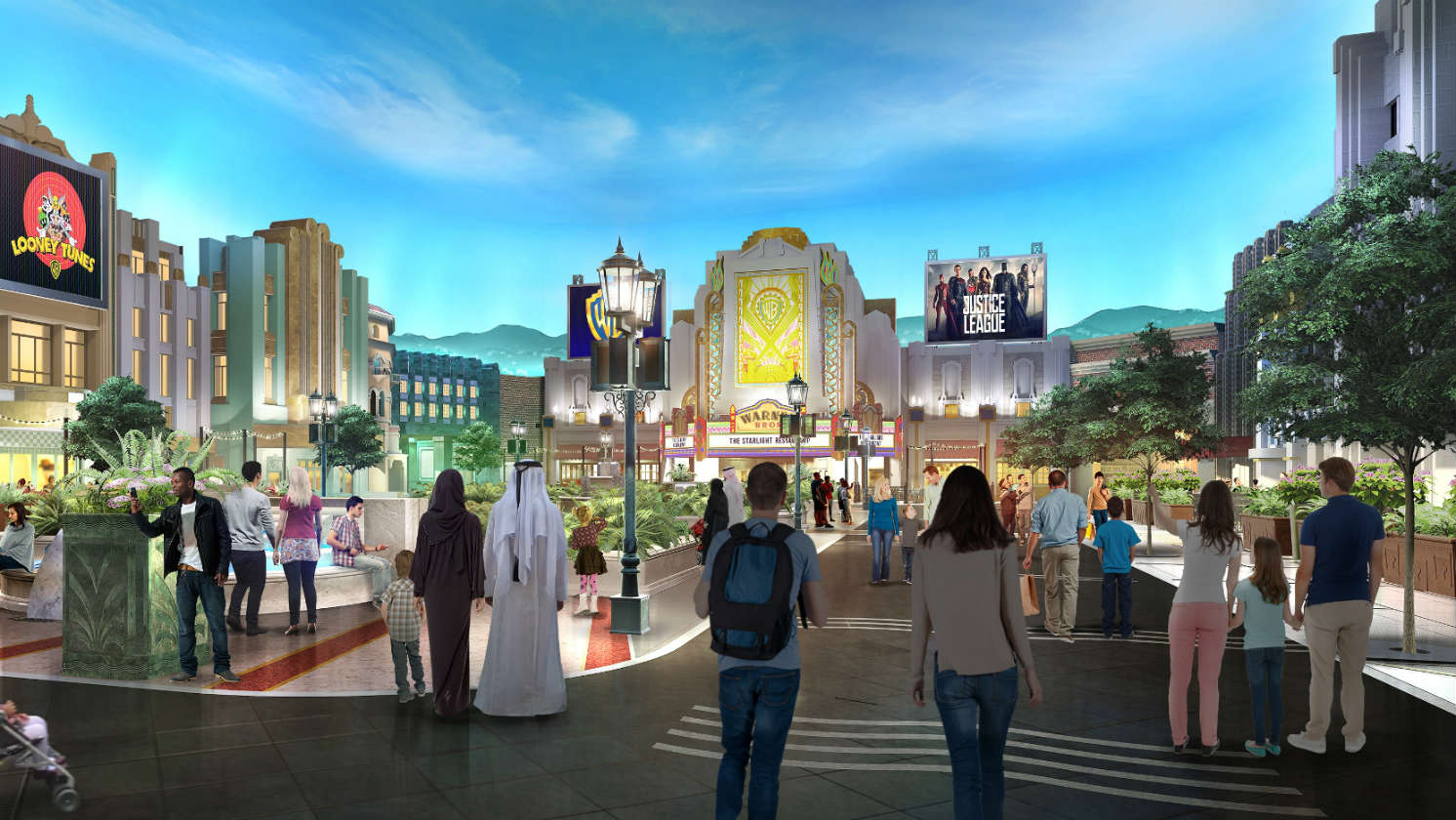 The sixth theme park in the United Arab Emirates is scheduled to open later this year, and we have a great first look at a ton of the new rides, shops and lands that will make up the new indoor theme park when it opens.
Warner Brothers World Abu Dhabi is going to be a cool mix of Super heroes, villains, toons and spooky mysteries as the new park delves into the various Warner Brothers properties in new and exciting ways. Today the park listed rides and shops for two of the six lands, as well as all six lands and some amazing new concept art.

The adventure starts here! Here’s where you’ll find tons of dining and shopping options and where you’ll have the portal to the other lands in the park. 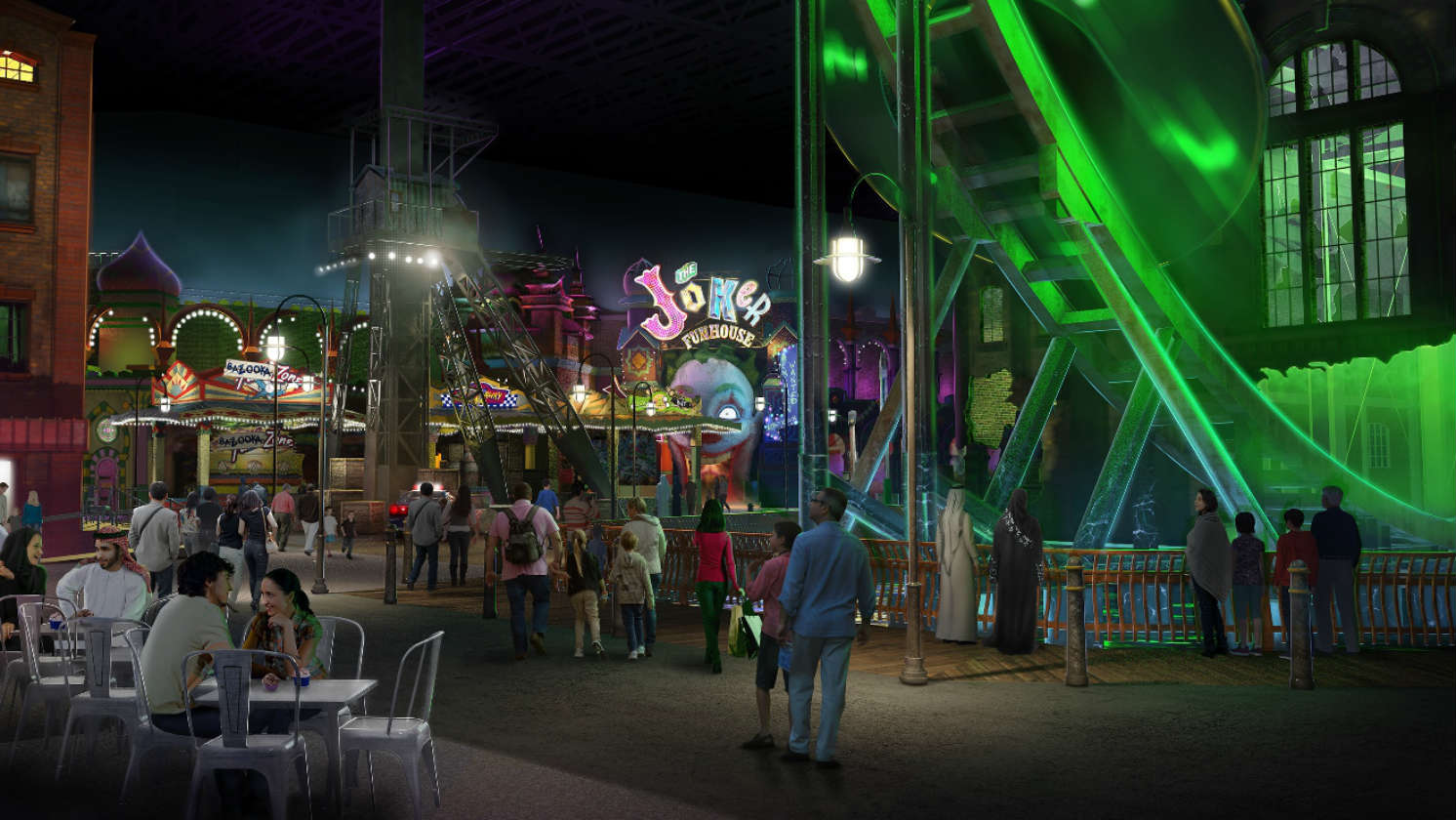 No information is available about this new land right now, but the concept art shows off a launched coaster, a drop tower and what looks like Joker’s Funhouse in the background. 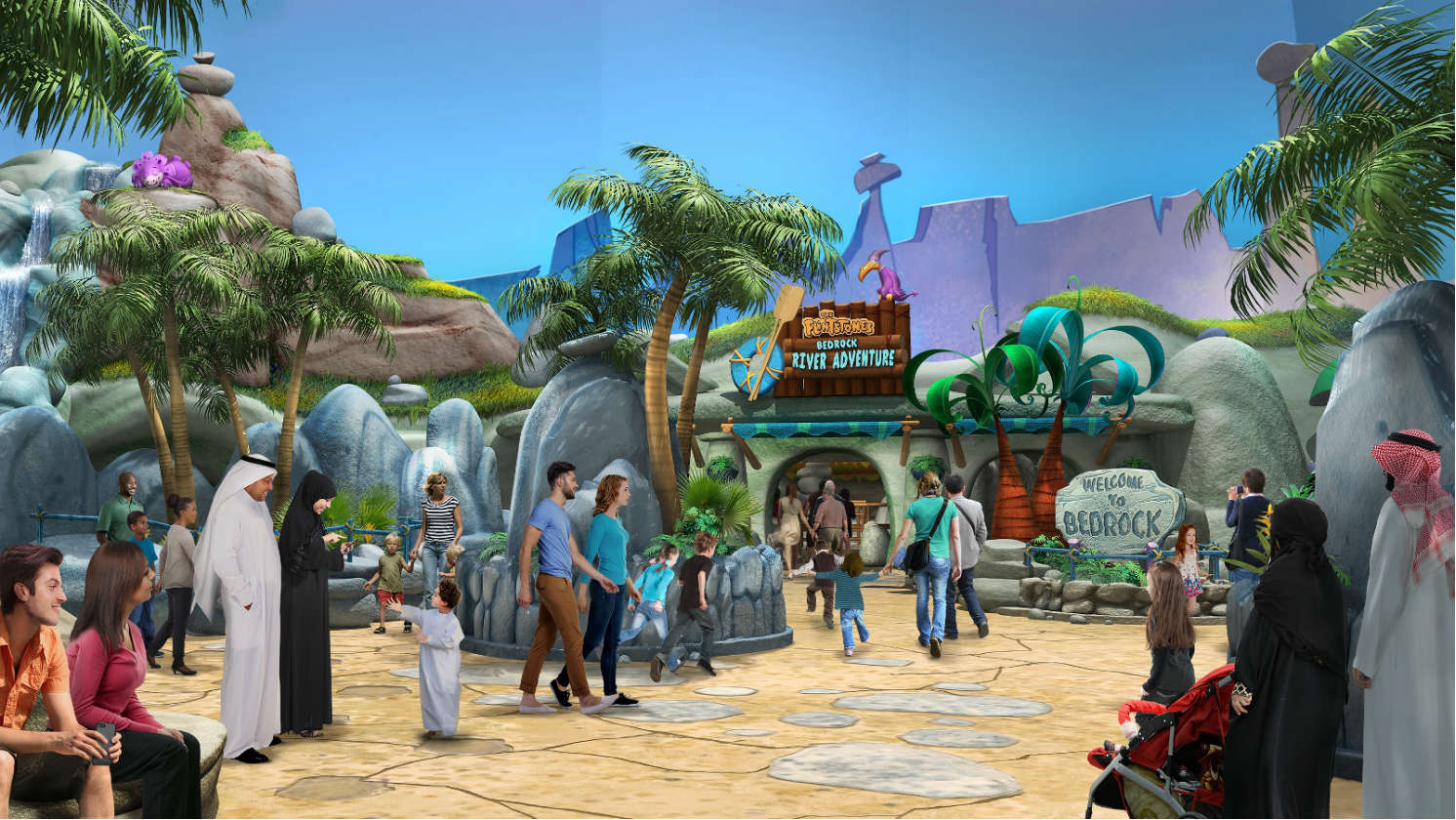 Home to the Flintstones, the new land promises prehistoric fun, big beef ribs, and tasty brontosaurus burgers. We also get something that looks like “The Flintstones Prehistoric River Adventure”. 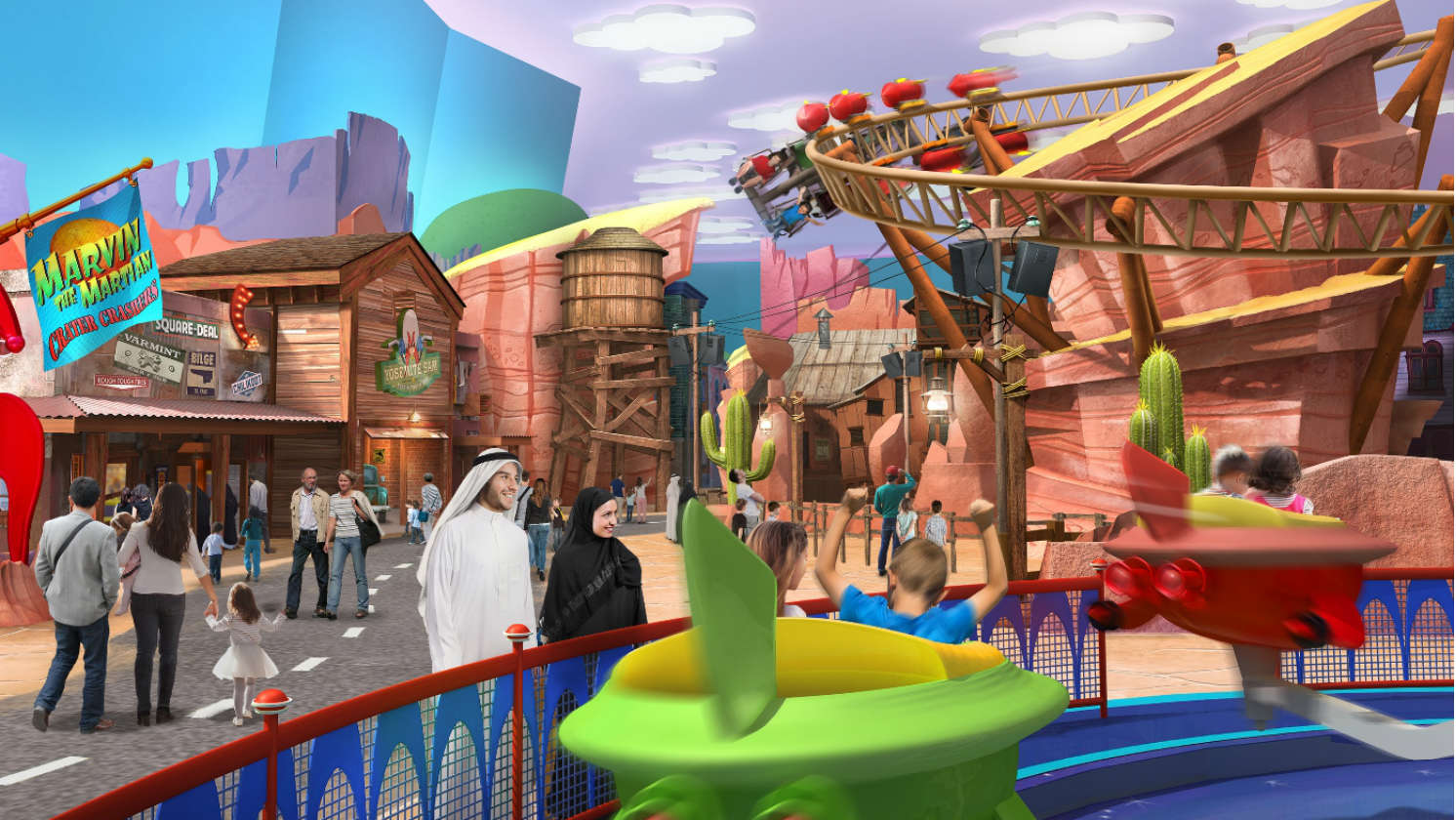 The desert of the Looney Tunes cartoons comes to life with an all new themed area, featuring what looks like a family inverted coaster, spinning spaceships and more. Wile E. Coyote and Roadrunner will be the stars of this new land. 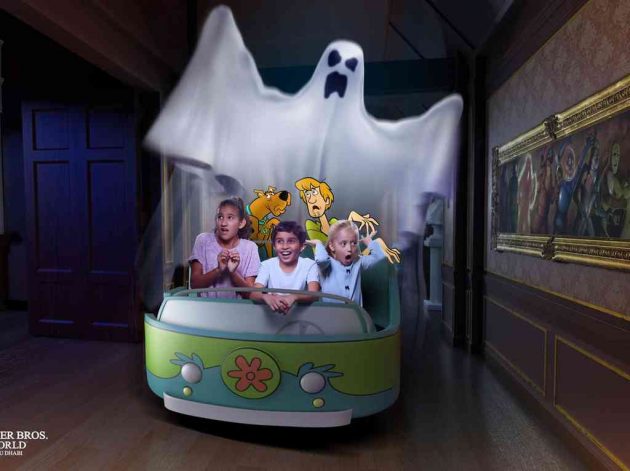 This land will take the old school cartoons of Scooby Doo, Tom & Jerry and the Looney Tunes cartoons and turn you on your ear.

Here’s the line up of attractions:

Scooby Doo: The Museum of Mysteries

A trackless dark ride that takes you through one of the creepy houses from Scooby Doo, along in the Mystery Machine. Join Scooby and the crew of Mystery Inc at The Museum of Mysteries as they follow the trail of clues… Zoinks, is there something afoot? 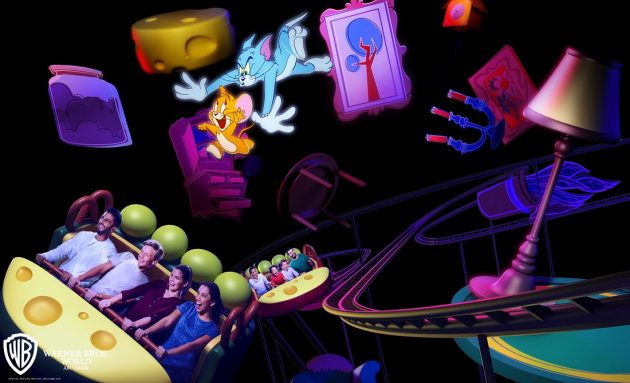 Interactive dark ride that takes guests through a mad dash to be  ACME’s Employee of The Month. Grab your barcode scanner, hop in your delivery vehicle and take up the challenge to see who gets the most points!

The Restaurants will include: 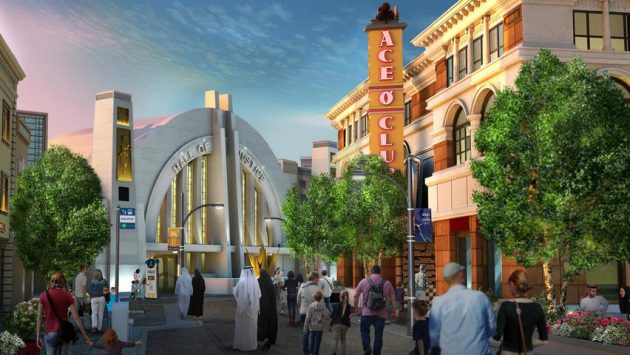 So this land is filled with tons of huge rides, and attractions. All of these seem to be simulators or dark ride attractions. The polar opposite looks to be Gotham City, which will have tons of coasters and actual physical rides. Still, looks amazing.

The Hall of Justice will be home to the big ride:

Justice League: Warworld Attacks: A thrilling dark ride with immersive media and special effects, which will rapidly dart, swoop, and spin amid a colossal clash while fighting off invaders from another galaxy. 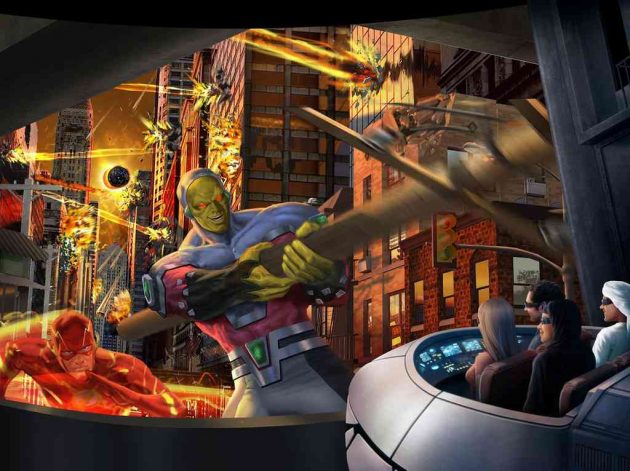 Head to the Daily Planet and be thrust into the middle of this pulse-pounding 3D attraction featuring the Man of Steel in a battle of heroes against villains to determine the fate of Metropolis. A huge 3D attraction that seems to be a major 360 “cinevision” type experience. 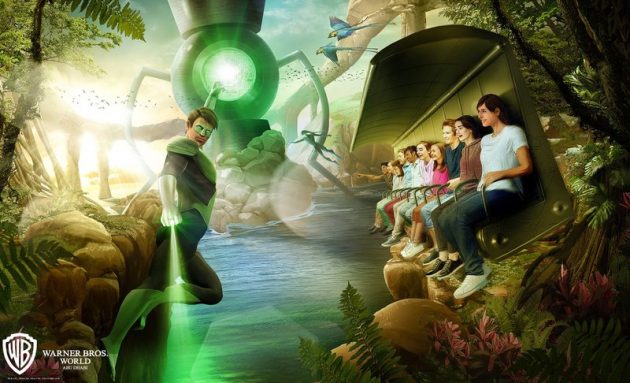 Join Hal Jordan and the team of interstellar peacekeepers and be transported across the cosmos to extraordinary worlds on this stunning 4D flying theater experience.

The areas restaurants will include:

Okay, call me excited. This exciting line up seems perfect for the new park. We can’t wait to see the other exciting line up of rides and attractions that Warner Brothers World Abu Dhabi has in store.

Overall there will be 29 new attractions when the park opens this summer. The park is the latest in a line of new theme parks that have opened, and will open in the next few years. When Warner Brothers World opens, it will be the sixth theme park to open in the UAE. Previous parks include Ferrari World, IMG Worlds of Adventure, Legoland, Motiongate Dubai, and Bollywood. In 2022, SeaWorld Abu Dhabi will open with the first park in the SeaWorld chain to not have Orcas.

Are you excited about the new park?