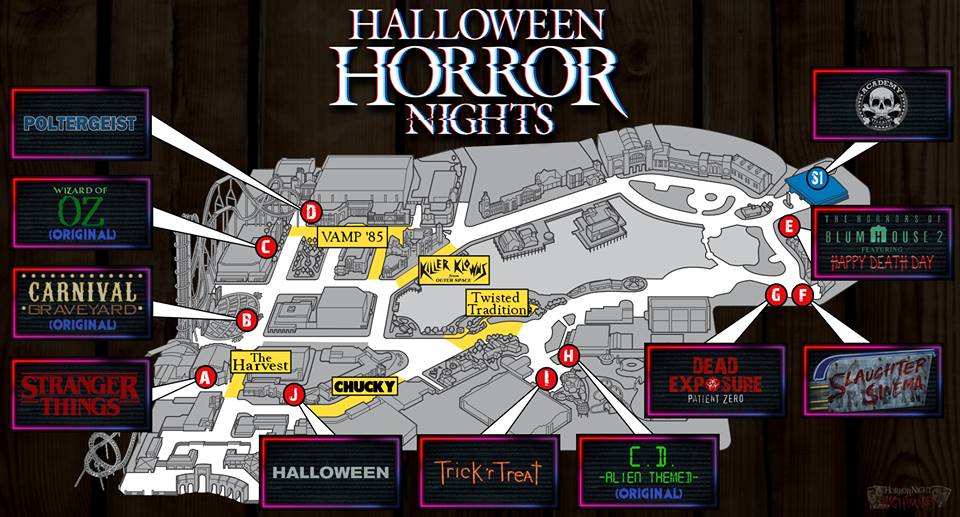 Our friends at Horror Night Nightmares are back this week with an all new speculation map.

Before we get into what the houses are, we’ve been noticing a little bit of a trend over the past few years. There has been a definite slide towards IP houses the past, say, eight years. The past few years, however, has seen more of a lean towards original ideas for mazes. Of course, some years skew more one way or the other, but with ten houses…this year is a very even split of original ideas and IP mazes.

Keep that in mind as we go forward.

Only two of these have been announced so far. We’re pretty convinced that IF Halloween is going to be a maze, it’ll be at both USH and Orlando. We’re also pretty sure we can expect to see the announcement at San Diego Comic Con. Of course, on one side we have people saying it’s happening, and the other side saying “no way in hell”. That’s why it’s important to take every rumor with a grain of salt and wait until Universal makes the announcements to make your plans.

Now comes the fun part. There are five original houses, two of which have been officially announced. There’s Dead Exposure: Patient Zero, and Slaughter Sinema. Both set in the 80’s and both paying homage to a type of movie that was really prevalent in that time frame.

Last week Nightmares rolled out a map that had a Wizard of OZ House, now we get two more.

Carnival Graveyard and a sci-fi alien house. Carnivals are by nature very creepy, and who knows what this new house will be like. With any luck it’s a very visual house like last year’s Bayou house. The Bayou house was easily one of the most visually stunning houses that HHN has ever done. If there is a Carnival Graveyard maze, there’s a huge chance for some stunning visuals, let’s hope to see those come to life!

Last year also brought us the campy, and fun Invasion scare zone. It’s possible that this house will expand on that idea, and be a full scale invasion, with campy style and fun.  But it could also go alien abduction style as well, with lots of dark and foreboding corridors. Either way it’s a fun time.

Trends tend to change at HHN, or evolve, based on the wants and needs of the people who actually go to the event. The fans will always want more original stories, and they also want no waits and no lines of people…but it just ain’t happening. But with a 50/50 split between original ideas and IP houses, of course I’m starting to think the trend is shifting again for HHN. Yes, it’s a fan fueled fantasy, but hear me out.

HHN started as homage to all things horror. They had Universal IP’s in the streets but rolled  away with original ideas that were steeped in the horror films that the creative team loved. Slowly it started evolving into more defined and brilliant stories, with new characters that Universal created themselves. That was your age of Icons, with Jack, Caretaker, The Director, Storyteller, Bloody Mary, the Usher and Lady Luck. Yes, some had more to do with the stories than others, but they were there, and the event was their story. The trend started shifting again towards 2007 when Universal brought Freddy, Jason and Leatherface to HHN. And soon it would be very IP heavy, with Universal using the license at its events all around the world. By 2009, it would start to slide more towards IP’s, and now, it’s just about all IP’s. Sure, the mix comes in here and there, but it’s been a lot of IP mazes for a while. Like I said above, the 50/50 split in houses shows that people love the original houses, just as much as the properties.

Universal has done it very well for a long time, using all manners of properties for their mazes. Their creative team proved to the world that they could do it bigger and better than just about everyone. Ideas that shouldn’t work were brilliant. It worked so well that other parks and companies started taking notice and licensing their own mazes. The Walking Dead being the prime example. The property is now all over the world as a haunted attraction and maze.

Let’s also not forget Warner Brothers. Universal and WB have an amazing relationship with the Harry Potter franchise, and have been doing amazing adaptations of Warner Brothers horror films like The Shining, and The Exorcist, not to mention Texas Chainsaw Massacre.

Now, Warner Brothers is trying their hands at a haunted event all their own on the Warner Brothers Studio lot, for the second year in a row. Last year the event was just a few days long, this year it’s doubled in the timeframe as well as the amount of haunts.

We’ve also heard rumor that Stephen King’s IT was to be at HHN this year, but IT is going to appear a second year at the Warner Brothers event, which would seemingly take it out of the equation. That also makes us wonder, with the rich library of horror franchises, will WB license their films to HHN anymore?

Yes, it’s a long road to get to the point, but here it is. With more haunts trying to mimic the success of HHN by using horror properties, and the amazing talent of the Universal creative team, could the era of the movie houses be over? Universal has their own pretty rich library of characters, dating all the way back to classic movie monsters, but the general public wants the modern horror classics. Freddy, Jason, Leatherface and Michael Myers have been at the event several times, but every year people clamor for them. If someone else is using those rights, will Universal still pay for the rights and do it themselves?

So, where are they headed? Well, with the alleged even split, it looks like Universal is heading back towards original stories. But what about the icons? Let’s honestly hope the old icons are dead.

Granted, Icons use to connect the event together, and would make loose storylines out of every house and maze. But while I love Jack and the gang, it’s been done. There are new stories with new icons to tell.

In fact, there’s one that’s been waiting in the shadows for a while now that could be the introduction to a new breed of horror.

Again, this is all speculation and conjecture at this point. But what if Universal is looking to head into their third decade of terror by introducing a new breed of icon? Universal creative definitely has the chops and skills to pull off an icon revival, but will the event allow it? Has the event simply gotten too big to go back? Will the event keep gaining fans that come back year after year, or will it just be the casual Halloween haunt seeker?

Personally, I’m rooting for a new breed of horror icons and stories. With the worldwide reach of Universal parks and resorts, it would be very cool to see the folklore and haunts from parks like Universal Japan and Singapore make it to America. Hell, there’s even a rich culture of horror here to draw from. An entire event themed completely around music is long, long overdue. With previous partnerships with Alice Cooper, Black Sabbath and Rob Zombie, it would be easy to fill ten houses with not only those mazes, but mazes designed by Lady Gaga (she loves horror), and even a maze based around the legends and horror of the Blues could be very promising. Or what about Rock n Roll Heaven, where the music legends go when they die…but the notes are always sour?

Still, HHN is its own beast, and it’s hard to know just what turn it will take next. We’ll just have to hold on tight and see what darkness is dredged up next.