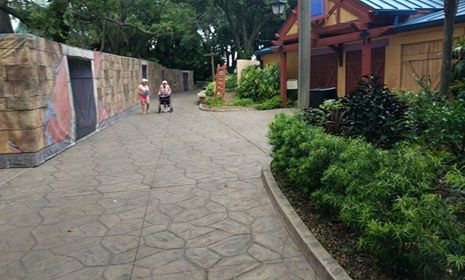 Justin Holas is back with another Busch Gardens Tampa update, this time we now have permits filed and a project name for whatever is replacing the Tidal Wave ride in the park, which closed last year. Let’s talk about the area first. The project will take over Tidal Wave big splash ride that was a staple of the park for decades. Before it was the Tidal Wave, it was a meandering river ride, based on The African Queen, and very similar to the Jungle Cruise at Disney. The loss of the ride is a loss of history within the park.

The new projects clearly show what looks like planning and spacing for a Premiere SkyRocket, which is the exact same coaster as Tempesto at Busch Gardens Williamsburg and Electric Eel at SeaWorld San Diego. While it clearly shows a new coaster, there’s more happening within the park, and with the permits that tell us there’s more to it than just this one coaster. 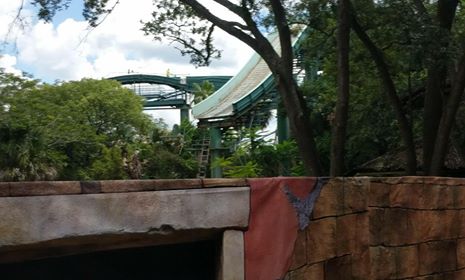 On Tidal Wave, demolition is moving at a break neck pace, as the entire drop is just about gone, and pieces of the flume are disappearing rapidly. While the coaster that looks like it will be part of the 2019 project isn’t that big, the area behind the walls is very large, and the area that they are working on is even larger. 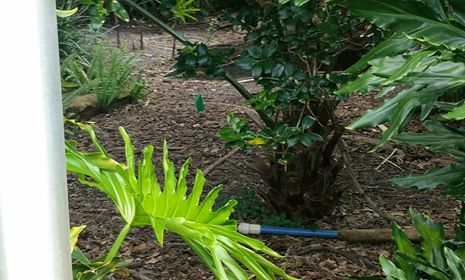 Elsewhere in the park, green flags popping up all over the area, mostly in a straight line from the area around Sheikra and Sesame, and extending all the way to the bird gardens. While different colored flags mean different things (we’re pretty sure that green is gas line), it is proof that work is going to continue all throughout the park, and really along that massive line towards the bird garden. More on that in a minute. 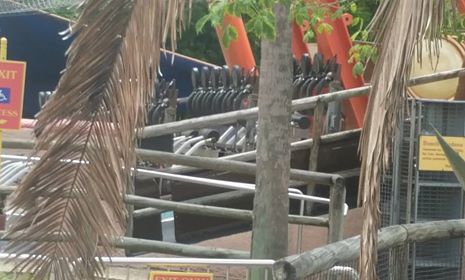 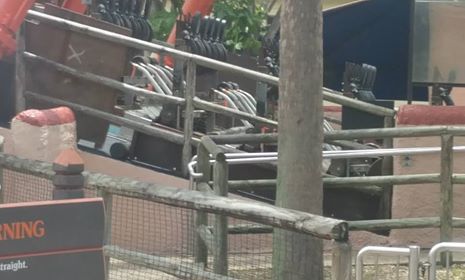 Over at Pantopia, the Phoenix has been down for maintenance for quite some time, with it scheduled to return on June 14th. Unfortunately, that hasn’t appeared to happen, as the ride is still down, and a quick look shows that seats are ripped out of it. If that’s any indication, it certainly looks like the ride will stay down for quite a while more. 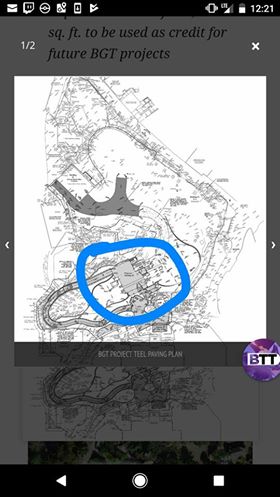 Back to Project TEEL. According to the permits, the paving plan shows two different areas. One area is for the coaster (above) and then if you look, there’s another area to the north. 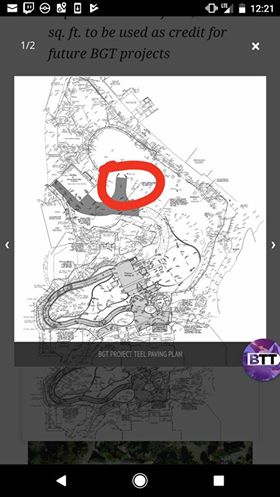 That area shows more pathway, that just ends. Now this could be for bathrooms, or a new restaurant or pretty much anything, but if it was for an adjoining project that would open with Project Teel, then it would have permits already filed. The plans do say that the area being prepped is for future projects, but what?

Well, if you line up the flags and the area circled in red above, you end up with a pretty big straight line, at least as far as we can tell. That straight line could be for anything, but if you think back to the past rumors, there’s always been plans for a giga coaster in Tampa that would stretch along the Serengeti, much like Mako does now. Could the plans and positioning have changed place? Could a second coaster be planned for the area in the not too distant future? It certainly lines up like one, with the plans for either a station or maintenance bay already being cleared up with Project Teel.

We definitely aren’t certain, but it’s certainly something to think about and watch.

There’s going to be a lot happening around Busch Gardens as they prepare for their 60th anniversary, or at least we hope there is. The park seems to be seeing a lot of traffic over the past few weeks, with the park pretty near capacity on the weekends. That’s really good news for parent company, SeaWorld, who definitely needs more wins right now. Busch Gardens doing well means that they are pushing in the right direction with things like Howl O Scream, Food and Wine and Summer Nights, and it also means more of that to come, which is just smart.

We’ll check back in a few days with more from the park.