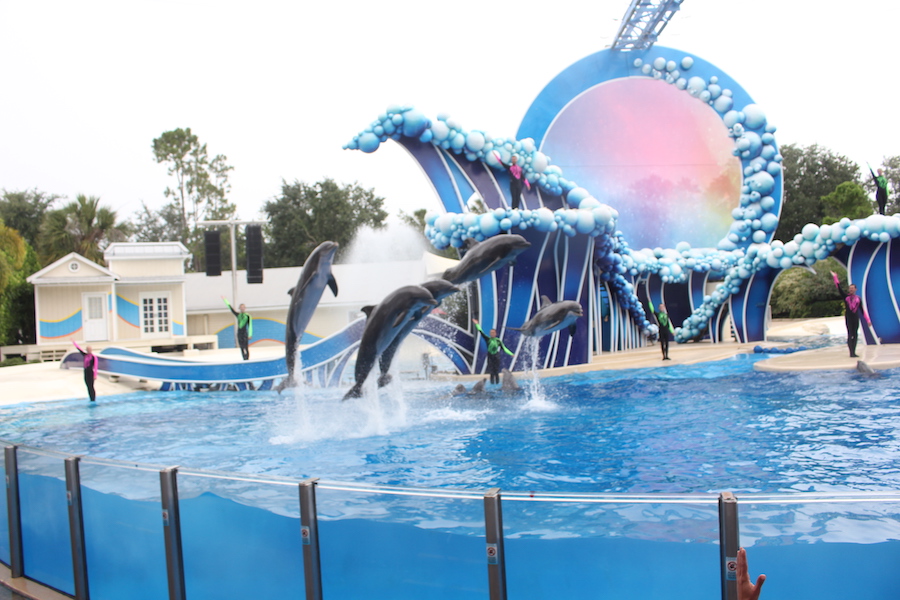 It’s the nighttime kick off to end all kick offs. The all new dolphin show at SeaWorld Orlando made it’s official debut last weekend as part of the returning Electric Ocean festival. The new show features everything that made SeaWorld so great in the first place, dolphins, original music and lots of fun. We had the chance to catch the first public performance of the show, and while it still tries to maintain the educational angle, the real focus is on the connection between dolphins and trainers, and just having a good time. 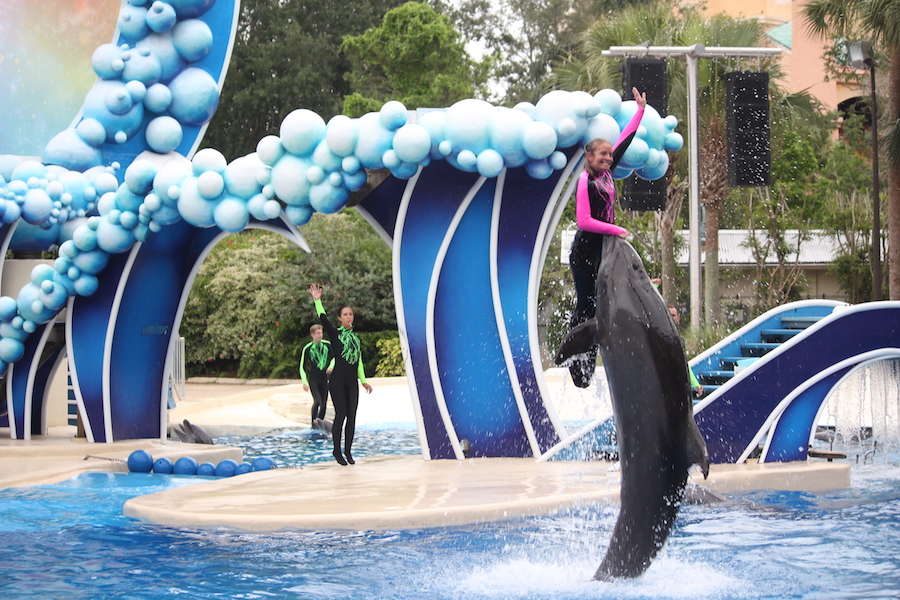 Touch the Sky takes place as the sun goes down. It’s billed as the kick off to Electric Ocean, and it is really a high energy way to get things started. The show builds on the educational and fun experiences of the day show, Dolphin Days, but turns up the energy quite a bit. Instead of trying to tell you about the connection between dolphin and trainer, the bond is put on full display as the dolphins and trainers interact in a variety of high flying stunts, in water connections, and just all around good moments. 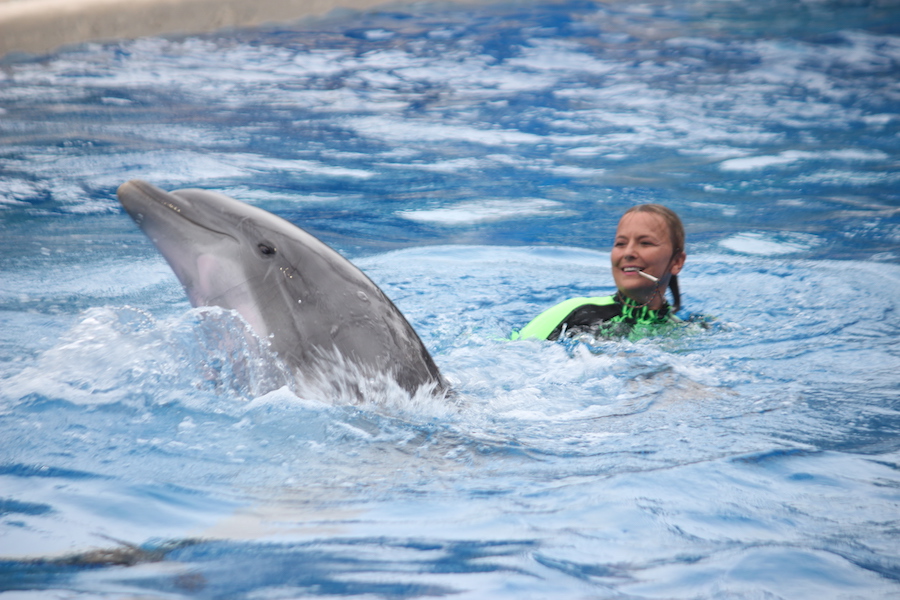 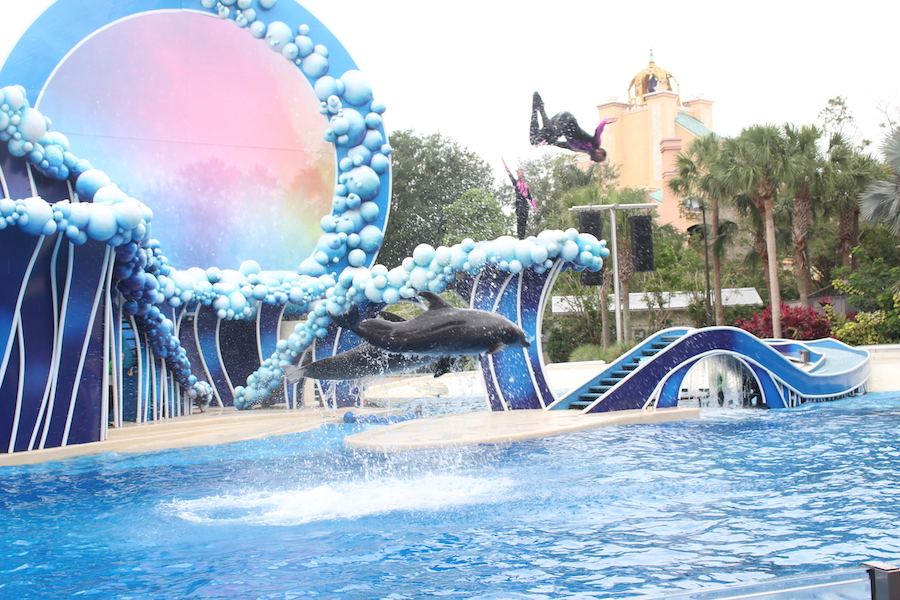 The end result is a really fun show that touches on what built SeaWorld in the first place, the connection that we have to the sea and the life in it. If that sounds kind of cliche or like lip service, it honestly isn’t. I found myself moved in ways with Touch the Sky that I haven’t been at SeaWorld in a long time. It’s that connection of the trainers, and the eagerness of the animals that push it forward.

See it for yourself:

Video-Check out the all new Touch the Sky in 4K

The show doesn’t pick up on any story, it doesn’t try to educate too much, and the trainers are just about having fun with the dolphins. The show is just pure and complete fun, from start to finish. 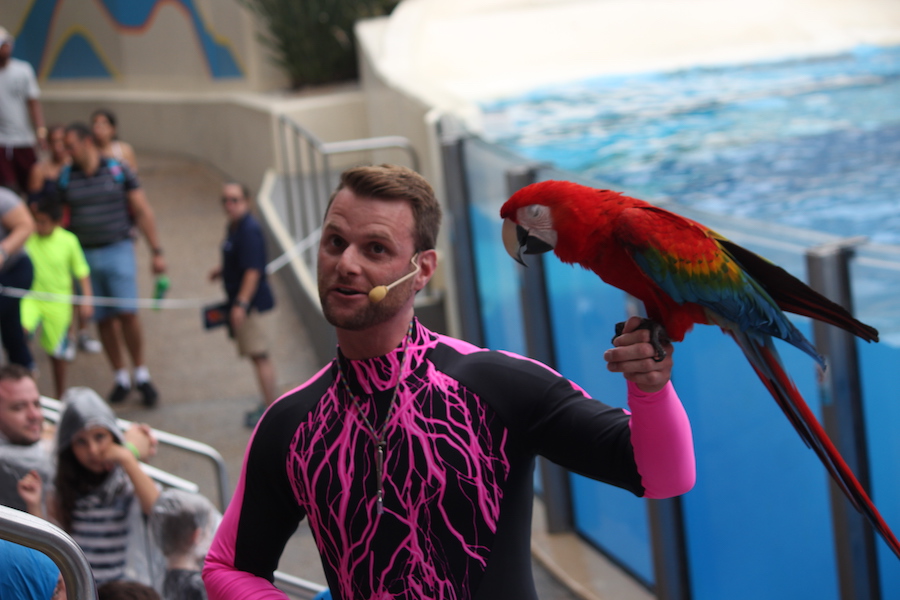 The odd twist with Touch the Sky is trying to include the birds. There’s a moment that all the brakes are put on, and the trainers take a sincerely educational moment to talk about the plight of the birds of the world. It’s SeaWorld, so you expect something like that, but it completely and totally changes the mood of the show. It’s not bad, it just takes away from the high energy feel, but honestly it feels like it’s just so the trainers can catch their breath. 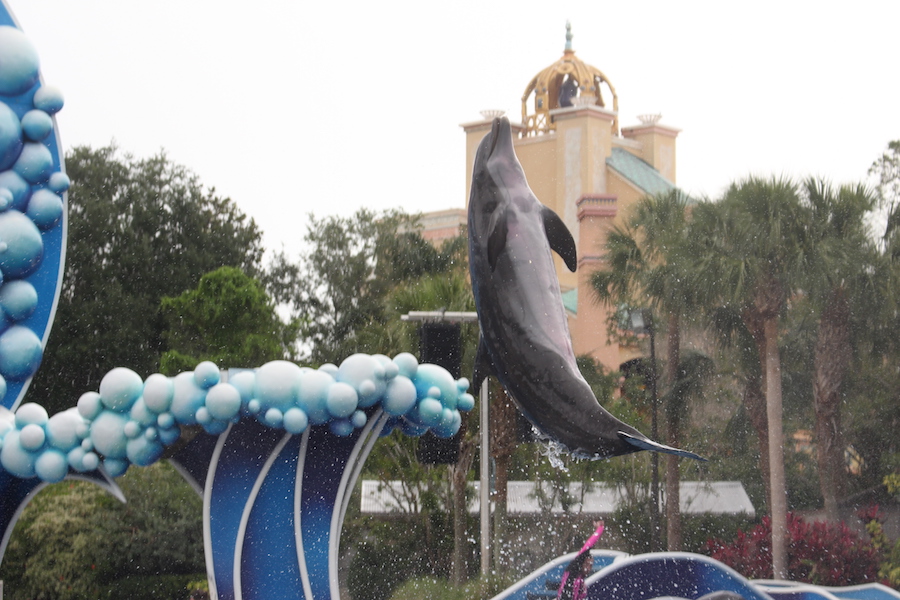 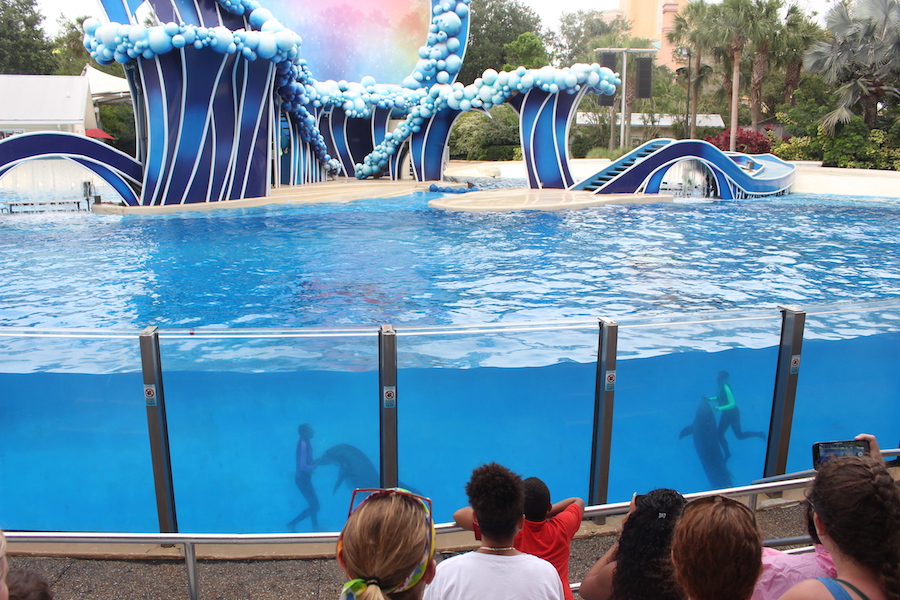 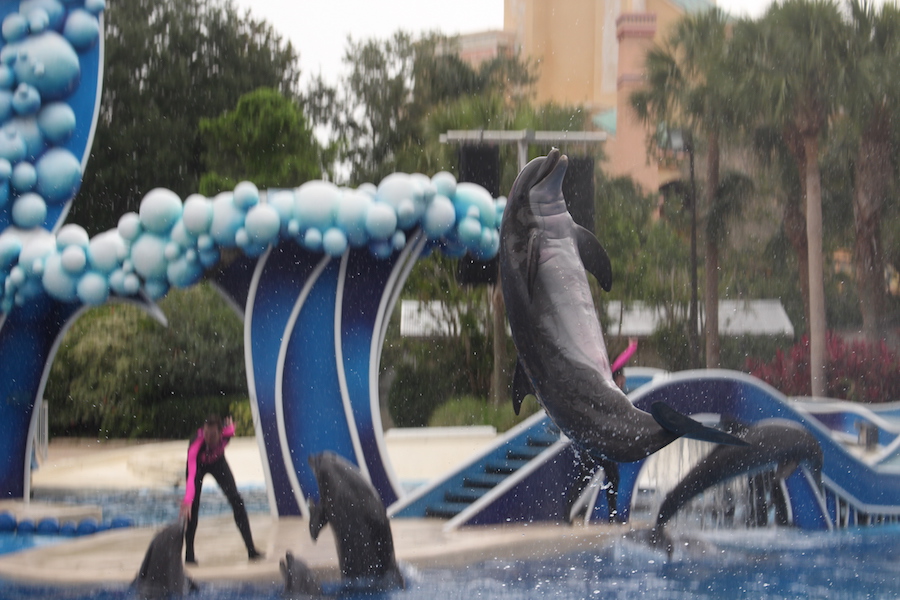 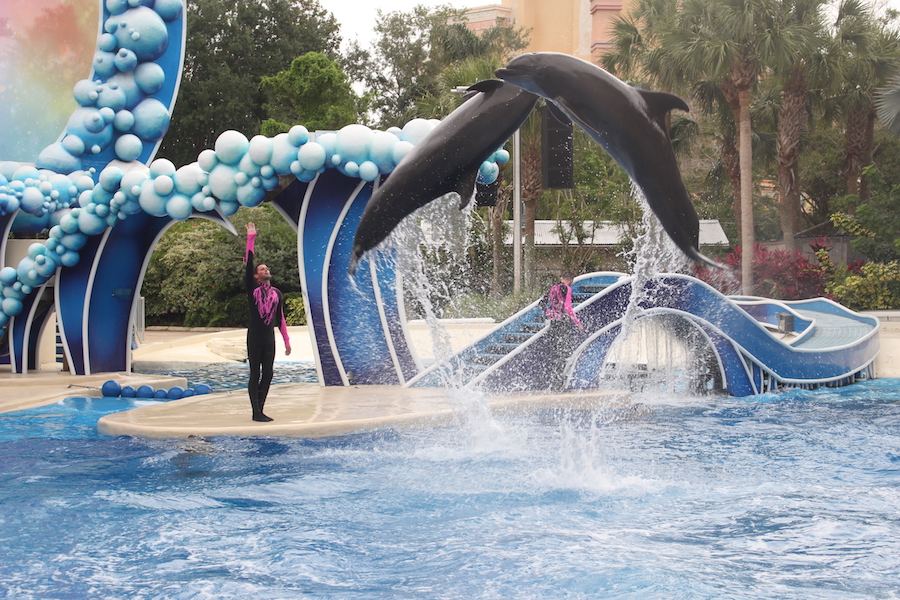 Like all SeaWorld shows, the type of show you get is all dependent on the animals. Touch the Sky was no exception, as the dolphins all seemed to feel the electricity in the air. They genuinely seemed to be having as much fun as the trainers did, and that’s saying a lot, because the trainers seemed to really have a good time.

The only qualm I have about the show, and it’s a little nitpick, is that this was not at night, with lights and more theatrics. It’s a blast, to be sure, but it really feels like it needed to be a little later. Of course, that may not be possible at Dolphin Stadium, but it certainly would have been fun. 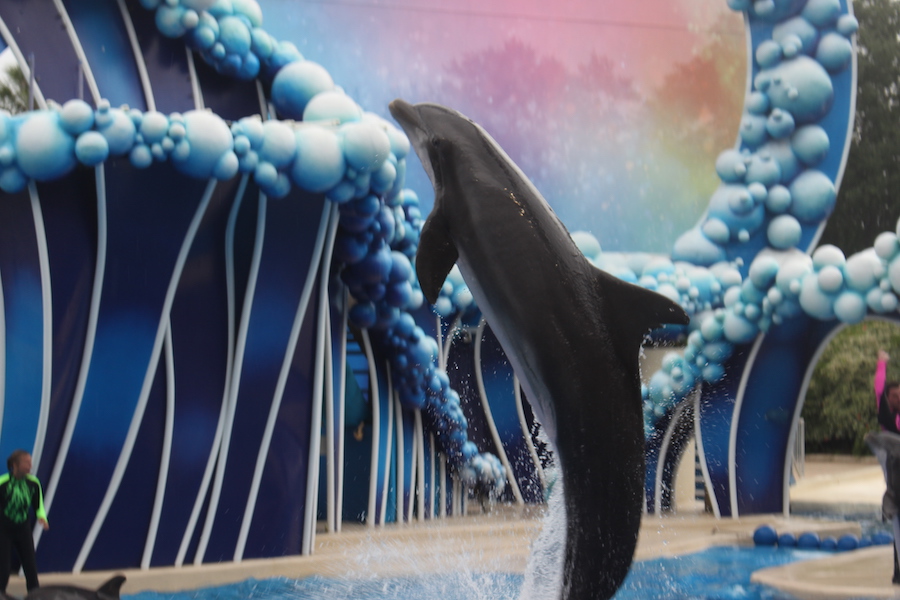 Touch the Sky is part of Electric Ocean, and happens on select nights from now until September.

Want to see more from Electric Ocean? Check out our massive gallery below!