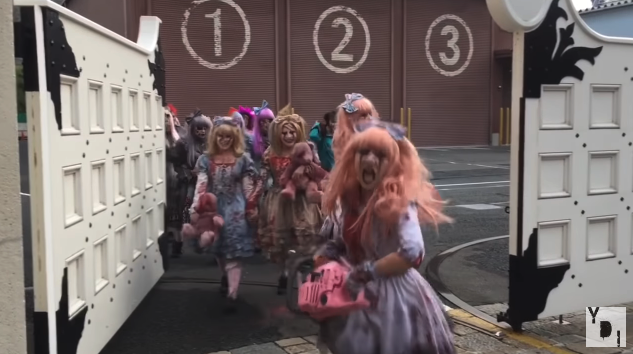 Universal Studios Japan has officially launched their annual scare fest with Halloween Horror Nights. This if the first of the four events happening at Universal Theme Parks around the world, with Universal Orlando and Universal Studios Hollywood kicking off this coming Friday, September 14th.

The event runs on select nights, and unlike Universal Studios Hollywood and Orlando, the Halloween event is not only included with theme park admission, but also includes a day time event for kids. Our friend YukenDoIt was on hand for the amazing activities, and of course has an amazing video that runs down the event. We’re going to take you through as much as we understand, but you definitely want to watch his video first.

I absolutely love seeing Halloween spread all over the world, and I love to see the interpretation of HHN in other countries. Universal has made a name for itself doing one of the biggest Halloween events, not just in one park, but in several parks around the world. Each one a little different than the rest, and two of which in countries that don’t even celebrate Halloween. That’s a pretty big deal.

This year there are new and unique scare zones at USJ Japan. In the past, the park relied heavily on zombies, with small shows, and lots of explosions. This year there’s not as many zombies, or explosions, but they’re definitely still there. Instead, there’s a big push towards new and fun characters in the park. 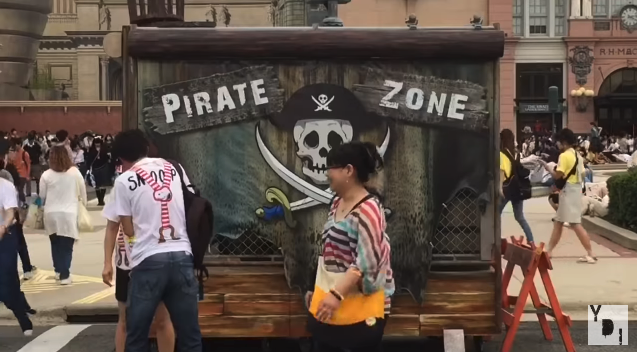 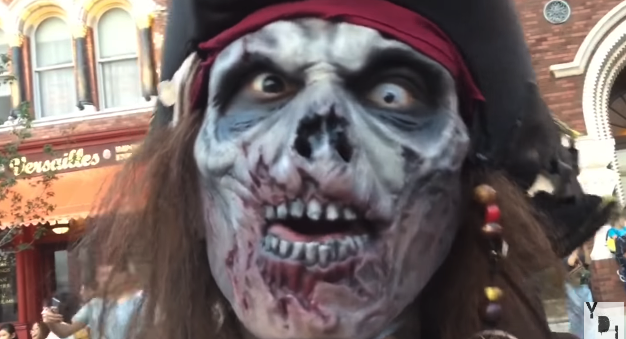 Pirates are an interesting idea for Japan. While there have definitely been some pirates in movies and pop culture, it’s not as embedded in the culture as it is in the states. The characters are very much derived from both the movies, as well as Japanese and American pirates. It’s a cool mix, and they make for some awesome scares. 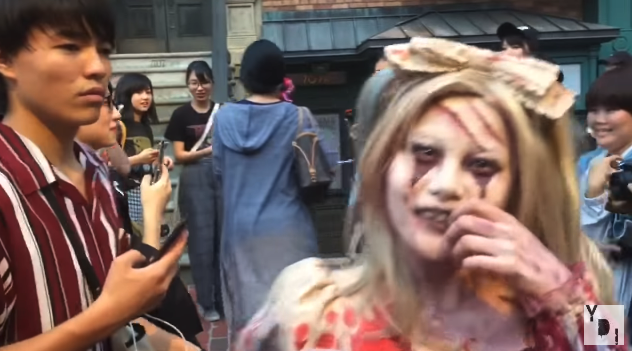 So the Cutie Zone is full of cute female characters that want to kill you. A lot of them resemble popular anime characters, that are covered in blood and want to kill you. It seems to be a fan favorite, and has a lot of people taking pictures, it kind of seems made for that, but don’t let the ladies fool you, they are pretty deadly. 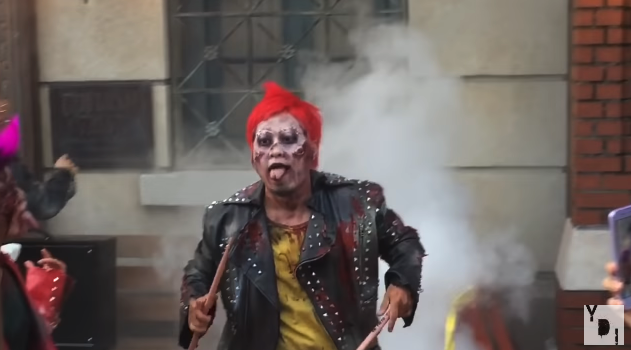 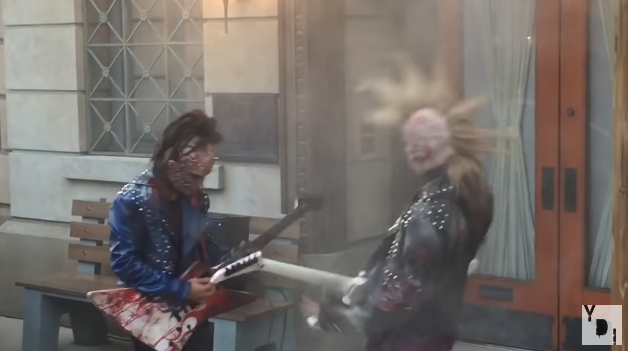 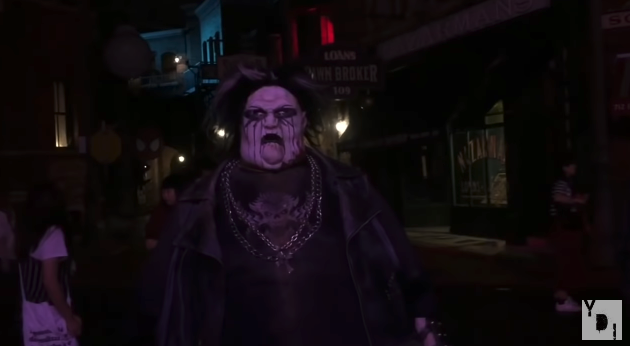 This one is pretty cool, how often can you see punk zombies pull a guitar solo? There’s tons of characters dressed as various “punk rockers”, and rock band members, as they come streaming out from all areas. 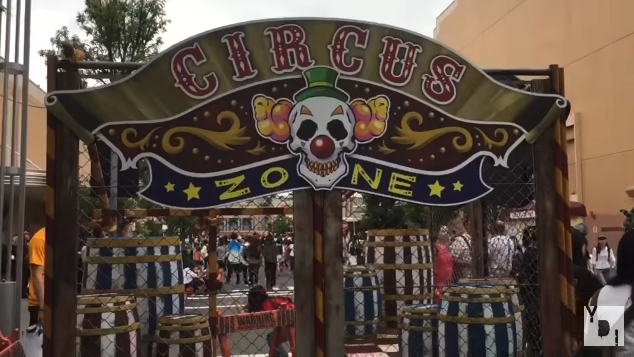 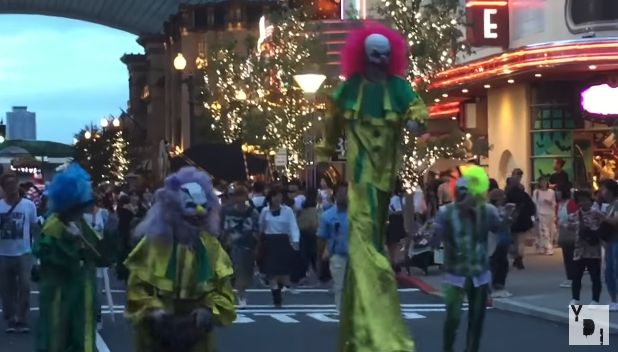 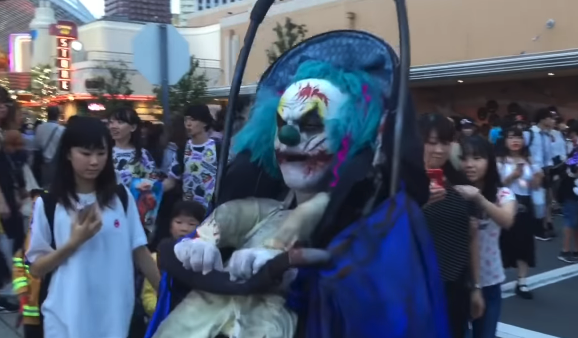 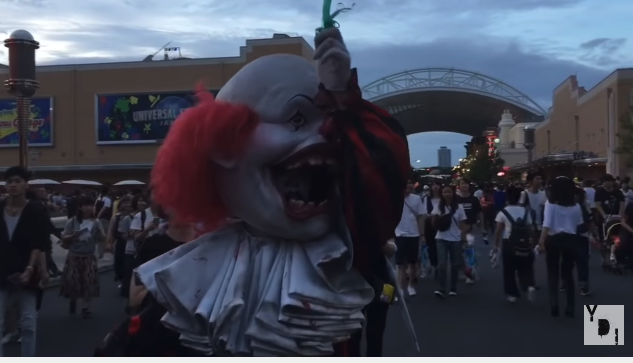 Clowns are the new zombies, and they are everywhere. They have happy painted faces, and murderous ways hidden under the fake smiles. Naturally, this is in large part to the success of Stephen King’s IT. There’s clowns of every size, and shape, with some on stilts and others using pretty impressive props, like Jack in the Boxes, strollers and even masks. 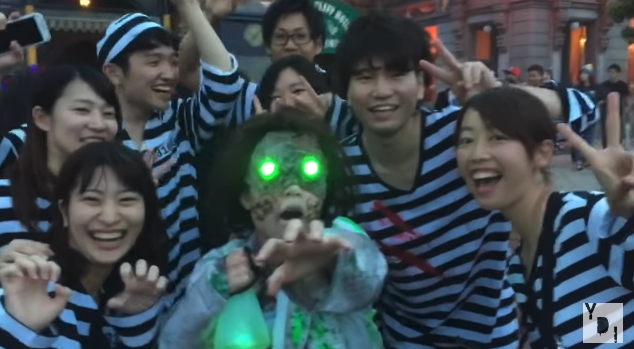 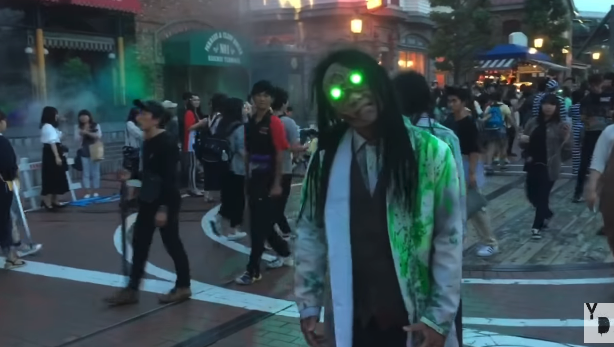 Something has gone horribly, horribly wrong, and what is left behind are zombies with glowing green eyes, and ooze all over. 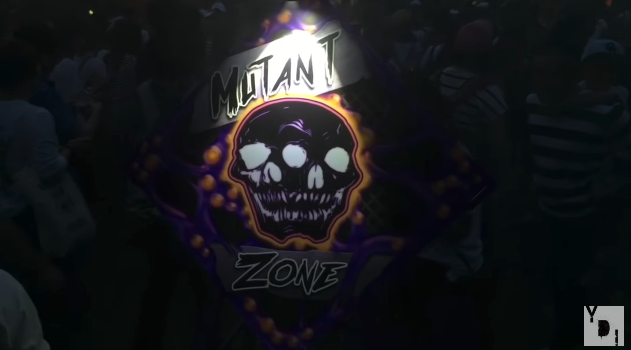 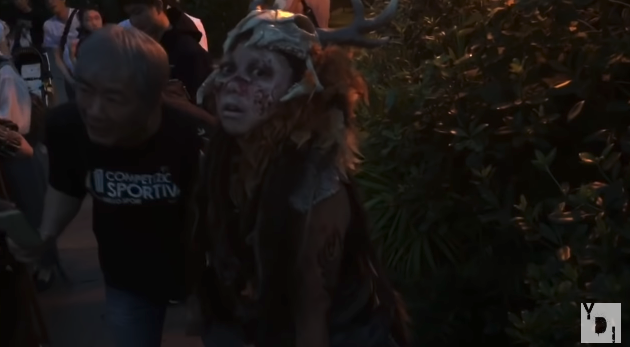 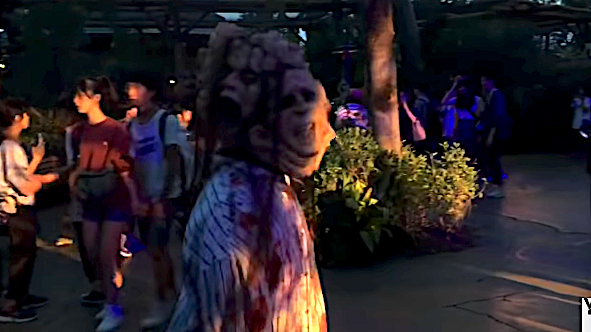 Less zombies, and more Mad Max, this zone features a variety of different creatures and characters. There’s even a bit of feel of John Carpenter’s The Thing with some of the characters, as the body horror element of it is very pronounced as well.

This year there are a total of 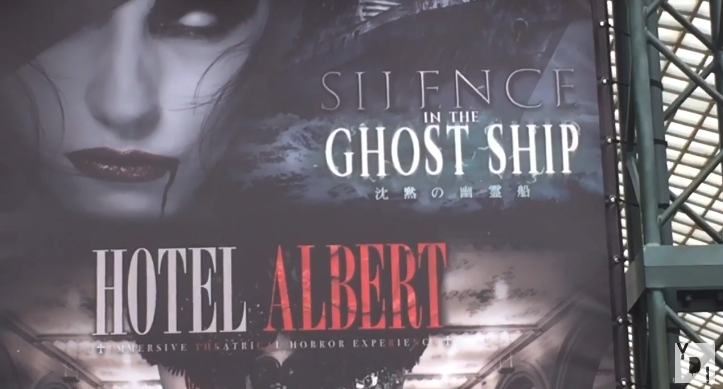 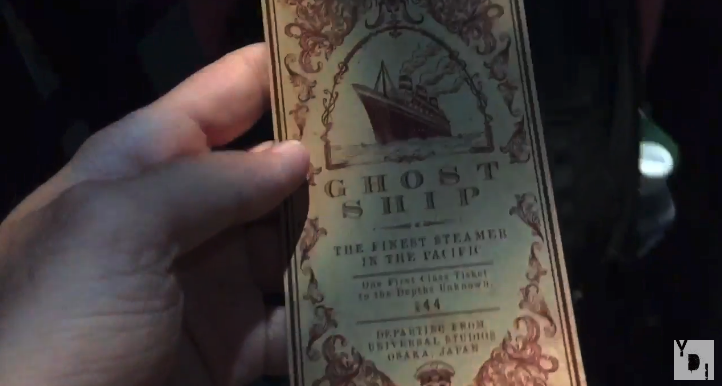 This year there are five haunted houses, with two of those being returning houses. The new houses this year are Silence on the Ghost Ship, Insidious: The Last Key, and Hotel Albert. Silence on the Ghost Ship is a pretty interactive new attraction, that takes you into the bowels of a Pacific Steamliner. It’s pretty intense, and full of different ghosts and monsters. Naturally, you are painted into a corner where you can’t help but make noise, and then you are done for, as all hell breaks loose. It’s an intense house, and definitely one that you can’t miss. 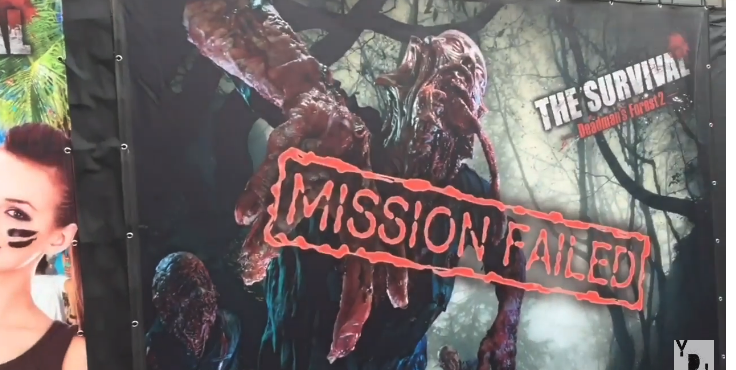 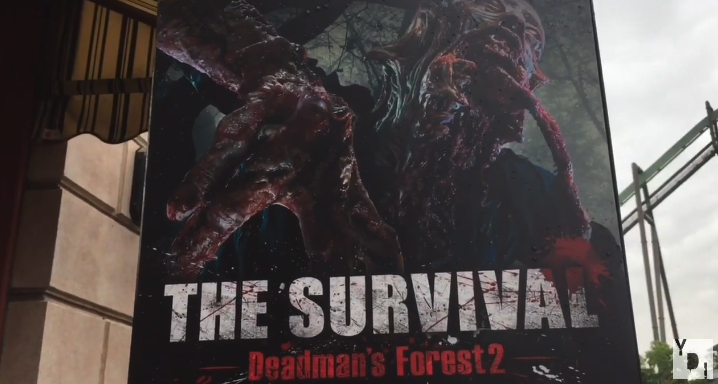 The Survival: Deadman’s Forest 2 is a returning house this year, but it’s completely amped up. More monsters, and some of the best puppet work you’ve ever seen in a haunted maze. 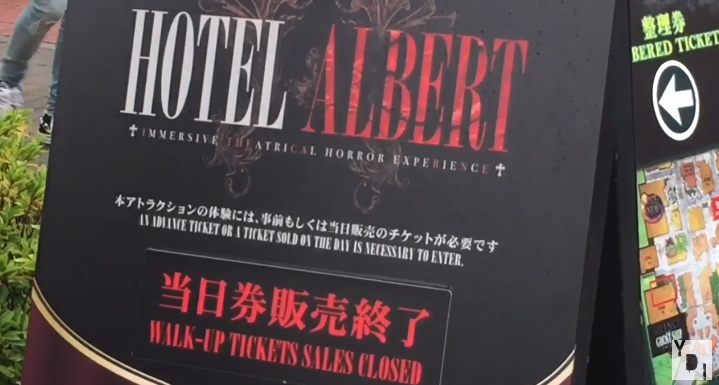 Hotel Albert is brand new for the park, and is more than just a haunted house, it’s an interactive theater experience. That’s something that you’re going to see a lot more in the coming years, as haunts are doing all they can to take you deeper into a bigger and more meaningful story. You won’t just walk through a house, and see things happen, you’ll be part of the story on a much more immersive scale. 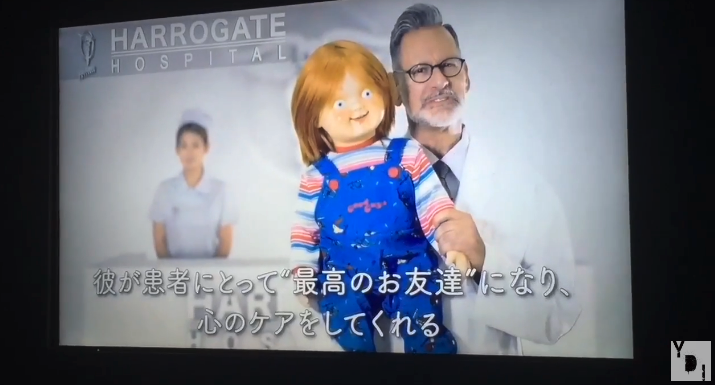 Chucky is back in a returning Child’s Play based house. While sometimes the houses are different enough to be their own beast, this one is a completely carbon copy of last year. That’s not a bad thing, as it’s a pretty intense house, but if it was one you saw last year, then you already know what’s coming. 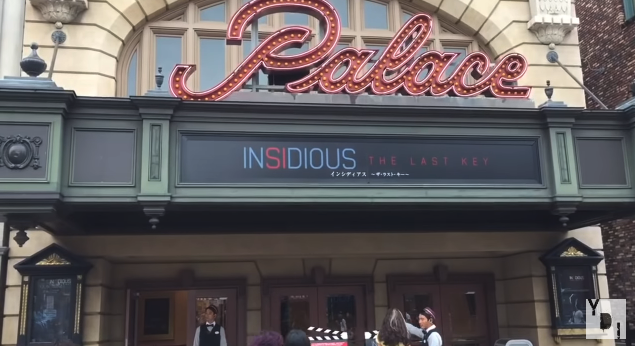 Finally is Insidious: The Last Key. The film was the fourth in the Insidious franchise, but it went back in time to before the events of the first two films. The maze follows all the Insidious films, and you see some pretty familiar characters with the Red Faced Demon, the Breathing Man and the Key Demon. In fact, you actually “unlock” the doors for the scares. Lots of great effects in this one, and some genuine jumps.

Which HHN will you be visiting this year? We will also have a run down of all the kids activities in a later post, so stay tuned!