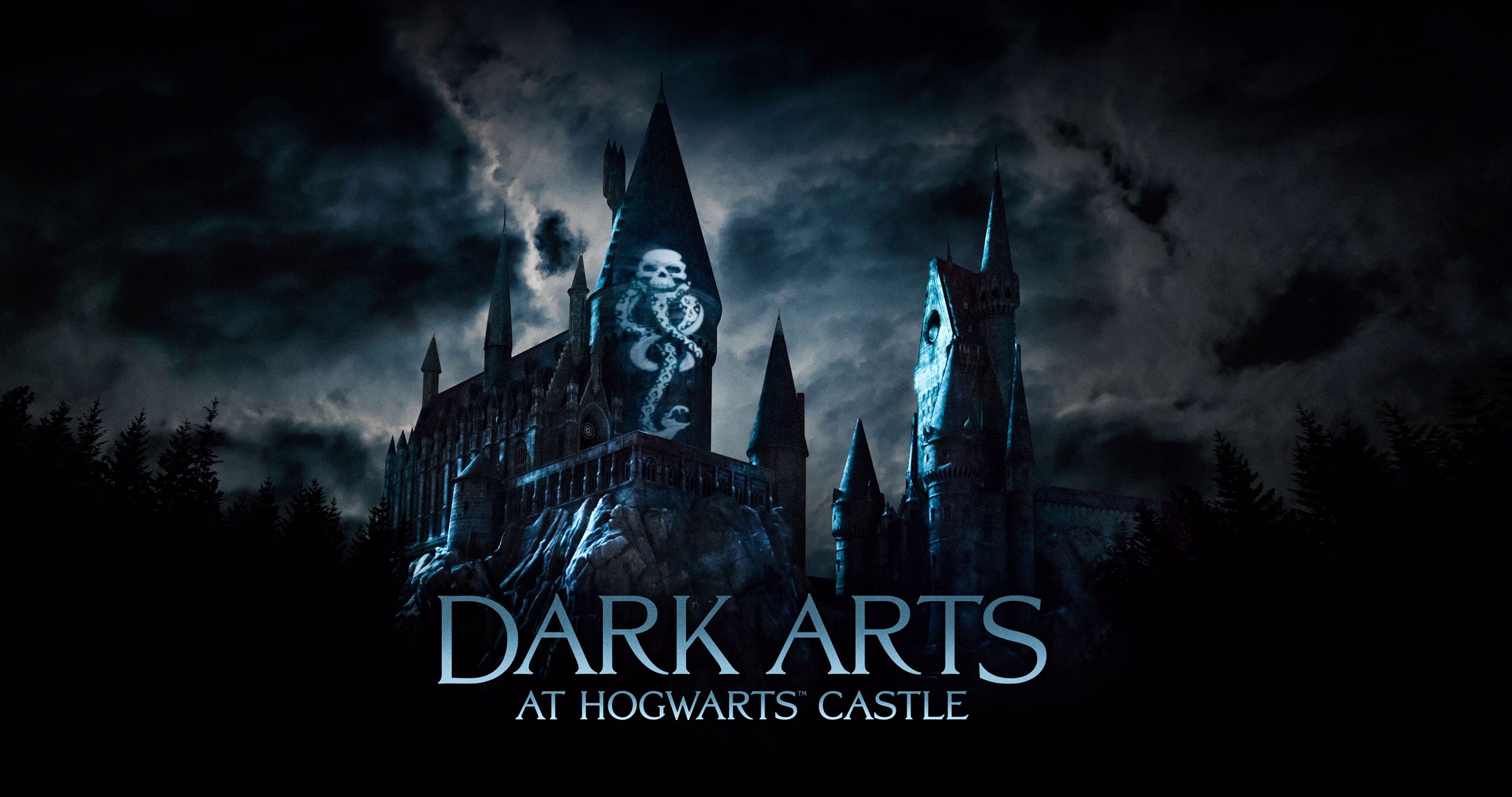 Beware of the Dark Mark. It’s a sure sign that Dark wizards are around and most likely, “you know who”. Guests looking to the skies above Universal Hollywood and Islands of Adventure need to be wary as the Dark Arts will be coming in an all new Castle Projection Show this year at both parks.The “Dark Arts at Hogwarts Castle” will illuminate Hogwarts castle and “The Wizarding World of Harry Potter” nightly from April 13 – 28 at Universal Studios Hollywood then return from May 25 – 27. It will come to Universal Orlando at a later to be announced date this year.As darkness falls on Hogwarts castle, Dementors™, Death Eaters and other unspeakable creatures from Aragog and Mountain Trolls to Thestrals will cloak the castle with sinister images from the darker side of magic—even conjuring the visage of Lord Voldemort™ himself, until the Patronus spell—one of the most famous, difficult and powerful defense of the Dark Arts charms in the wizarding world—is cast.The “Dark Arts at Hogwarts Castle” will be accompanied by an exclusive musical arrangement that will emanate in a surround sound environment. It was conducted by prolific arranger William Ross and recorded by the London Symphony Orchestra in London, based on the original scores composed for the film series created by Academy Award®-winning composer John Williams.The show sounds similar to Expecto Patronum at Universal Studios Japan, which made its debut in 2017. Check out the show in the video below.Video-Dark Wizards Attack at Universal Studios Japanhttps://www.youtube.com/watch?v=AZHxG9xIxdc&feature=youtu.beWhile it’s not likely the exact same show, Dark wizards and dementors will be in the air around Hogwarts Castle. This is the third projection show to come to The Wizarding World is Harry Potter, with the first two being Nighttime Lights at Hogwarts Castle and Christmas at Hogwarts. Both shows are amazing ways to cap off the day at Universal, and both are amazingly faithful to the movies and books.We can’t wait to see what this latest show will bring and what dark magic we can see. Stay tuned for more from Universal, and be sure to get social with us on Facebook and follow along with us on Twitter @BehindThrills for the latest updates! For our latest theme park videos please be sure to subscribe to us on YouTube! For more information about Universal Orlando,including tickets, visit the official website by clicking here!
TAGDark Arts at Hogwarts Castle Harry Potter
Previous PostWhat horrors await Universal Orlando for HHN 29?z Next PostSeaWorld announces another increase for 4th quarter of 2018