While HHN Orlando is bracing itself to debut this week, the teams at Universal Studios Hollywood are hard at work getting ready to debut next Thursday for the big Fan Preview event and grand opening the on Friday the 13th. Join us as we take a look around the park for an early look at what to expect.

The props for the scare-zones were recently revealed. The first being for the highly anticipated “Spirits and Demons of the East” scare zone. Lots of brand new props in the zone. Has us wondering if an Asian folklore original IP maze may be in the works down the line.

Just across the way, right in-front of The Walking Dead attraction a herd of walkers photo op has also emerged. It’s already a popular photo op among day guests.

Walls have come down around the ‘Holidayz in Hell’ maze facade. This one is supposed to feel like you’re walking into a living post card on New Year’s Eve.

The exit for this maze leads into the “Christmas in Hell” scare-zone which acts as both the finale for the maze as well as a stand alone scare-zone / path. Lots of cheerful and horrifying props emerged.

When riding the tour you get a great view of the facade for “US”. Which is a replica of the fun-house seen in the film.

Also on the tour you get a very quick glimpse at the facade for “Pandora’s Box” which is themed to look like a small trinket/antiques shop.

Much like Universal Orlando, Hollywood is also getting a version of the Starcourt Mall / quick service food location. It’s unknown what will be served here but a neat addition as this event continues to grow and evolve.

That does it for this first look at the on-going Halloween Horror Nights Hollywood prep, Stay tuned for more from Universal Studios Hollywood and HHN events all over the world and be sure to get social with us on Facebook and follow along with us on Twitter @BehindThrills for the latest updates!

For more information about Horror Nights at Universal Studios Hollywood, including tickets, visit the official website by clicking here! 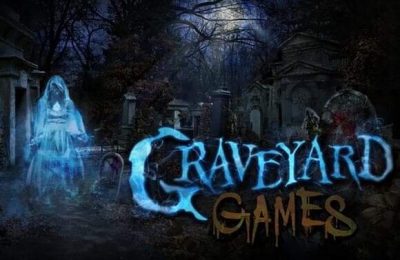 Stay out of the graveyard! Graveyard Games coming to HHN 29 at Universal Orlando