Launch #2
This launch goes on for a bit longer than expected, and the speed is impressive, suddenly you are already out of the launch tunnel and into the Tophat.

Tophat
The Tophat is another element that has a big difference from front to back of the train. The front provides an awesome view, and has you out of your seat on the way up. The back likely has the strongest moment of airtime throughout the ride as you exit the peak and pull down into the steepest moment of the ride. This massive element is not a highlight of the ride for me, but it does give you a moment to look around and take in what is about to come.

100’ Stall
This element comes quickly and is one where the left and right sides of the train will feel a bit different. Both provide a zero-g moment, but it’s over fast. The element doesn’t feel like a stall, it’s more about the entry and exit here, which are both extremely fun. Your body is thrown one way, and then just as you seem to straighten out, you get tossed to the side again. It’s an extremely fun moment & the left seat provides a strong pull out of your seat as you enter and exit and is my choice of side for this element.

Wave Turn
Down and back up into a short wave turn, you’ll feel as though you’re being launched into the lagoon before turning more to the right. It doesn’t feel as strong as something from RMC, and it’s over quite quickly, but very fun nonetheless.

S-Airhill #2
Not an outer-banked air-hill as many have called it, this Twisted Air-hill is one of the stronger moments of negative-G’s through the ride, and feels strongest on the right side of the train where you’re rotated upwards and then pulled back down.

Overbank #3
An overbank provides minimal G’s followed by a floaty moment of weightlessness as you mentally prepare for what is about to happen in the following element.

Micro Airhill
This ride would actually be better in my opinion without this element. A straight section of track to get your senses focused on how much speed you still have at this moment of the ride would be better and make the Mosasaurus Roll seem even more insane and terrifying.

Mosasaurus Roll
This Heartline-Roll element is one that will catch you off guard when you ride. It’s a feeling like never before as you start to get some hangtime, but then something odd happens, a small kink in the track gives your butt a bit of a push as you fly back out of your seat mid-roll. It’s something you really need to feel to believe, and it is easily the best Heartline roll I’ve ever experienced and feels like nothing you’ve been through before. It might be my favorite inversion of all time. I still can’t wrap my head around this element, but it is perfect.

One of the strongest moments of airtime surprisngly comes in this final hill. A great element that doesn’t give you a second to breathe after the insane Mosasaurus Roll that just happened.

Overall it’s incredible how much the scale truly changes as you’re on the ride. The Jurassic World Velocicoaster has two distinct halves that both differ tremendously, but shine in their own unique ways. Transitions feel quick, airtime feels strong, and the ride is one that may be a one-and-done for some because it is quite intense and long, which is

Overall this is a ride that I just want to ride over and over. Getting off is tough because you really just want to go again. it’s incredible how much the scale truly changes as you’re on the ride. The Jurassic World Velocicoaster has two distinct halves that both differ tremendously, but shine in their own unique ways. Transitions are nice, airtime feels strong, and the ride is one that may be a one-and-done for some because it is quite intense and long, which is great for days when crowds are lower and you may actually begin to see shorter lines late in the day after a few years.

The Jurassic World VelociCoaster may very well be the best roller coaster in the World. 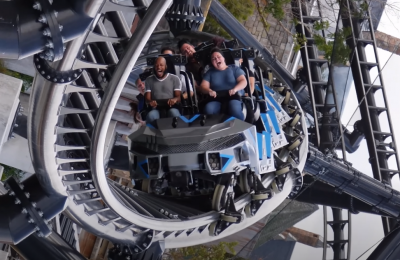