Horror Nights brings back the “Truth”

Things that go bump in the night aren’t always a figment of your imagination. Sometimes there’s something that bumps it. Two years ago, Legendary Truth was born and uncovered the Truth about Dr. Mary Agana, a.k.a. “Bloody Mary”. After a year long hiatus, it seems the truth is back.

If you’ve been following Universal’s Halloween Horror Nights for any length of time, you’ll know that they like to make things a little dramatic when it comes to the website. It helps to work the fans up, and creates a mythos for the event. Two years ago Bloody Mary became the subject of an “investigation” of the Legendary Truth. It was a site created to stir up even more interest in the event, and lead to an eventual game that gave clues all through the event. The end goal? To find out the truth about what happened to Dr. Mary Agana.

It ended up in a closure to the story, of sorts, with a huge fan event Halloween Night. It was on a scale that Universal had never done before, or since. It seems that this year, Legendary Truth is back.

If you click on the lantern, now spewing flames, you get a collection of photos that haven’t fully developed. If you wait long enough you get hacked, and a message appears. It takes you to the official Legendary Truth website.

The site is pretty much the same as we left it back in 2008, with a list of the various alert levels. Only this time the focus has been taken off of Dr. Agana, and now is shifting on Universal Orlando itself.

“And because someone on the outside needs to know what’s coming. Something is very very wrong.”

The names are crossed out and the only thing visible is

This is of course followed by a briefing:

Fanboys and geeks may immediately make the connection. Someone from Universal A&D has left over the last year, the professional whereabouts are not known of one of the key members of J Michael Roddy, who was with Universal. Probably just a coincidence, but a clever one none the less. 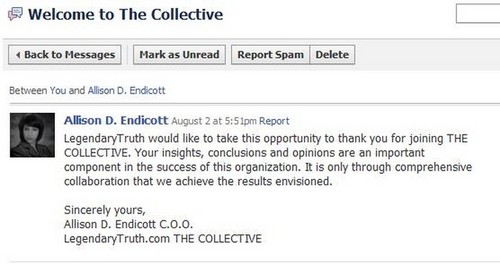 It’s exciting stuff to say the least. This pretty much confirms what rumors have suggested, The game is afoot. This is after all the 20th year of HHN, and should prove to be a fun one at the very least. Follow along with Legendary Truth and you may find yourself in a world that you never could have imagined in your darkest nightmares.