Disney has had the market cornered of fairy tales for quite some time. Their stories and ideals are pretty much what most of us dream for in our lives and love. This weekend Disney is retelling one of those stories, and while the whole pursuit of love and a “Happily Ever After” is still there, it’s not quite what you might think. The all new live action film Maleficent stars Angelina Joile and Sharlto Copley and isn’t as much of a prequel as it is a complete and total re-write of the beloved tale, with a little more emphasis on why the most evil Disney villain is so evil.

Angelina Jolie stars as Maleficent, Sharlto Copley as Stefan. There’s also some Harry Potter character actors in there, but mostly those are the two that give the strongest performances, more on this in a minute. The story tells the tale of the protector of the magical creatures of the moors. Everyone is happy and living in peace, until one day man comes to visit, and turns the happy times into darker times. The protector of the moors and the creatures in it is a winged fairy named Maleficent, played by Jolie. The story spins on a cycle of betrayal and revenge. It looms over the entire film like a shadow.

The film does throw some references towards the original Sleeping Beauty, but hardcore fans of the Disney film, and of the evil being that is Maleficent might be a tad disappointed in this. The film does have some dark moments, but it’s meant to be a sympathetic take on the wicked evil that turns into a dragon. It’s extremely sympathetic, and strays greatly from the original story. It works on the level of being a fresh take on a story so familiar it’s become boring. Where it doesn’t work is trying to squeeze what could easily be a two hour movie into just over 90 minutes. The film feels like so much was left out. While some sequences drug on forever, others are rushed by and not given enough time. For example, we get a feel good opening backstory of Maleficent as a child, but when it comes time for Maleficent to unleash her full power, she’s left lying on the floor.

The scenery can be breathtaking, if you can get over the cartoonish level of the CGI. It’s not terribly fake looking, but the way that the scenes in which the live action characters and the CGI characters interact just don’t blend well. Angelina Jolie is best when she’s given room to be bad in this film, and unfortunately, she isn’t given that room. There’s a few scenes where she completely turns on the evil, and seems to relish in it. Those are the scenes that make the movie worth watching. Sharlto Copley hasn’t  been bad in any film he’s been in, and this one is no exception. He makes the most of any character and any script he’s given and runs with it. He’s great as King Stefan, and blows the doors off with his descent into madness.

The really interesting thing about the film (without spoiling anything) is that it explores the good and evil in all of us, and how it can be triggered by those who we surround ourselves with. Revenge can make us do things we fully regret, while obsession can make us ignore the world and love around us. Darkness comes to us all, and can consume us, if we let it. In the sense of the film, darkness  morphs everything in the world, and the happiness and brightness of the world the film creates is literally shadowed over. It’s a huge metaphor on what we bring to ourselves, a shadow of anger, resentment, obsession and revenge hanging over us, eating away at our worlds. Then there’s the sexual themes and tensions in the film at play that we won’t even get into.

In some parts the film is unexpected, and it really makes Maleficent a likable character. She’s already a likable character, but mostly because we love how bad she is. Here she’s not bad as much as she’s just misunderstood, or at least that’s the intention. What we end up with is a super sexy version of a villain we already love, morphed into something that we’re not quite sure about. The kids will love it, the adults who don’t over think it will love it…but if you’re a huge fan of the bad guy…this may not be your movie. 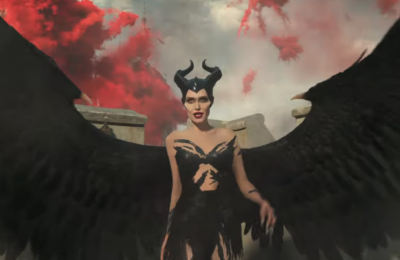