First up, Islands of Adventure.

First off, Green Eggs and Ham was open last week and we just happened to be in the park. Although we’d already eaten breakfast, we made it a point to stop and eat a Green Eggs and Ham platter, which costs $6.99, anyway since it’s never open and we’d never tried it before. Might I add, the eggs look absolutely disgusting because of the food coloring, but they tasted fine. We highly recommend stopping in for a bite to eat if it’s open. 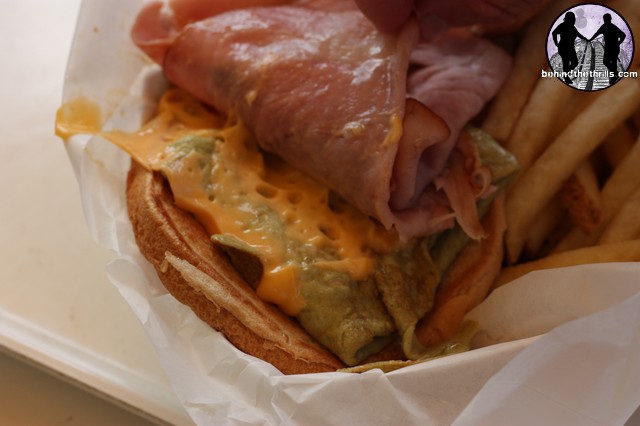 We’ve heard the Discovery Center has undergone some changes, so we headed over to check things out. As far as we can tell, nothing has changed, but we were able to check out a hatching of a dangerous baby Velociraptor.

The water vortex is back at Poseidon’s Fury. The vortex is a really cool effect and I’m glad it’s been turned back on. Let’s hope it stays this way for awhile. I thought it was a pretty decent attraction until I saw (and walked through) the Vortex. It’s mind blowing and just makes the attraction feel empty without it.

A little activity going on in Trike Encounter as cleaning supplies and old posts were dug up. Hard to tell if this is going to reopen as we were originally told, or if they are going to put something else in this area as we’ve recently heard. It’s a bit small for a new JP ride.

ET is rumored to be on the chopping block right now after Universal confirmed via Twitter that Jaws is staying in the park. In honor of the chopping block rumor, we headed over to ET to ride it to discovery no line what-so-ever on a fairly busy Saturday. It would be sad to see it go, since the forest is very well themed, but I’m sure something great would replace it.

HHN Construction has begun, and with literally just a few weeks left things are going up like mad. With stages being set up in the Hollywood area for Rock the Universe (really?) and huge structures being setup like they were for Asylum in Wonderland. Anyone know for sure what scare zone is going here? The sad news is that once again, there will be absolutely no photography AT ALL allowed in Bill and Ted, which is quite the shame. Last year’s show was amazing, I guess it’s in fear of getting “sued”.

The New York area is being transformed, obviously, into Saws and Steam. At first I wasn’t really looking forward to this one as it’s an obvious choice for “Chainsaw Drill Team” but after seeing these props and the fact that they are literally using every inch of the area, it’s shaping up to be a fun looking scare zone.

I’m also going to call our good friend Spook out. He said, and I quote “Where is the article on the blatant theft of the HOS scare Zone from last year?”

Right here buddy, right here. It seems to some that Universal has taken the scare zone from last year dealing with the Mexican Day of the Dead Festival for it’s own use this year. Judging by these pictures, Esquelto Muerte will only share the same Mexican feel, but there is where it ends. Blacklights, cardboard cutouts, coffins, and no clotheslines. But Spook is right, it’s not like Busch Gardens “borrows” ideas from Universal, and be sure to check out Taste of Blood and Trapped in the Walls: Ghost Catchers this year! Love ya buddy Spook!

One of our favorite shows at Universal is the Horror Make Up show. Not because it’s funny and it really comes together with the actors, it’s because we all love Halloween, blood, guts, and gore. Some of the clips have changed to feature the newest Wolfman movie, but the show hasn’t changed one bit. I must add these guys were on fire. The entire audience couldn’t stop laughing. This was probably the best show I’d ever seen performed by these guys.

Minions have invaded Universal! I knew it wouldn’t be long before Universal has walkabout characters or an attraction featuring the Minions from Despicable Me. This area is popping with loud music and long lines to get a photograph and is located right next to the Horror Make Up show.

New Potter merchandise has arrived at Universal. They now have a light up Triwizard Champions Cup (the portkey from the books) that lights up. There is also one other shop that particularly grabbed Erik’s attention. They’ve got Lord of the Rings collectible merchandise, featuring Frodo Baggins. Could this have anything to do with the blue sky survey conducted last month?