Easter candy is now half off at all the local stores. It’s great if your kids are out of town and didn’t get to spend Easter with you. Now when they come back you can have Easter like the Russian-Greek Orthodox church does, a week later than everyone. Of course that means you have to dye all new eggs, because the ones you did Saturday night are starting to smell a little funny. Not that have experience with that or anything. Oh look, theme park updates! Shall we then?

Ramp Jam kicks off this weekend at Busch Gardens Williamsburg. The tour was just in Tampa about two weeks ago where it was a huge success. Bucky Lasek will be tearing it up the first week and each of the three weeks will see a different headliner. Check out the official website for a complete line up.

Speaking of Busch Gardens we have received a picture: 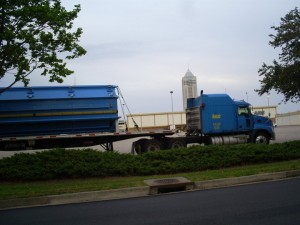 This was spotted parked in a mall parking lot about 40 miles East of BGW. From what we’ve been told, it’s Mach Tower. It matches pieces that are already on site. It looks as if we’ll see some vertical construction happening very soon.

Disney
Marty Sklar, whom I missed at IAAPA last year, will be hosting a lecture and Q&A session. Marty Sklar is a former head of Walt Disney World Imagineering. The lecture will be held at UCF’s Rosen College of Hospitality on May 13th. Tickets are open to the general public and this will more than likely sell out. For more information visit the official site.

If you love Pirates, there is an all new featurette..featuring Captain Jack Sparrow (of course) and Angelica.

Universal
Not really so much news, but Universal has announced that there will be more Fast and Furious Films. However, don’t expect a lot of street racing. Just like the last installment, and the 5th (which opens Friday) the films are getting away from the street racing element and going more towards heist films that feature great car chases. More from Variety. While I haven’t been a fan all the way through, I say go for it! This may give Universal the franchise they need to make a huge car stunt show.

Speaking of movies. Arnold Schwarzeneggar is once again the Terminator. His return to film will be in the role that made him famous. It’s kind of a risk when you think about his age, but it may be the boost that the franchise needs to make it fresh again, and possibly reboot it so that we get us a robot war! Plus, it would almost force Universal to update the old attraction…or get rid of it. Full story.

Speaking of licensed characters, Managing director of Drayton Manor says that licensed characters are the way to go when opening a new attraction. According to this story, it provides a huge boost in attendance and merchandise sales. Can’t argue that, but it is a sad state of affairs when you would rather use someone else’s ideas rather than come up with a new character all your own.

Testing has begun on Green Bay’s Zippin Pippin but according to this the opening date has been pushed back two weeks until May 21st. Blame the weather.

An all new app will allow you to see current ticket prices for parks all over the world. The app is free, and gathers the latest information right to your iphone or Droid. Download the app, and more info.

The Mortal Kombat webseries keeps trucking along with Episode 3. It’s really all over the place. I hope it all ties together soon and gets to the fighting.

Ride of the Day
It was one of the first really good uses of 3D in a theme park experience. While not necessarily a ride it made a one of a kind attraction by combining live action with a very solid storyline and extremely good 3D effects. This is one of the only theme park shows that many consider better than the movies on which it was based. It gave my best friends his nickname that he used for years on discussion boards. In honor of Arnold putting on the Terminator glasses, T2 3D Battle Across Time is your ride of the day.