Did anyone happen to catch the Royal Wedding? I must admit, I did, and it was very touching. A fairy tale come true. Now let’s see if it lasts like the Disney fairy tales, or if it ends like the Erik Fairy Tales (crying, yelling “I hate you” as you stuff another Twinkie in your face wondering where it all went wrong….god I need therapy.) But it was somewhat inspiring seeing everyone flocking to see two people get married, adds a little hope to the world that maybe things will be okay. But hey, I’m a romantic. Theme park news anyone? Shall we then.

Speaking of hope. It would appear that Galaxy Spin at Fun Spot in Kissimmee is getting a new coat of paint. Could this possibly mean that the coaster will go up sometime soon? 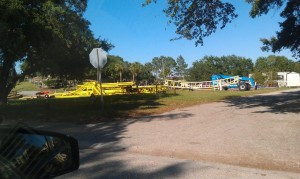 Remember the big hubbub when Pirates at Disney got the big huge makeover including Davy Jones and Captain Jack? Well according to Jim Hill Media it’s going to happen again, only this time we will be seeing Ian Mc Shane as Blackbeard coming from the waterfall.

My hopes are that Blackbeard is so bad ass that he becomes more popular than Jack and we get a string of “Blackbeard Adventures”.

A list of guests have been released via StarWars.com for the upcoming Star Wars Weekends, which will kick off May 20th with the opening of Star Tours 2, the most anticipated rehab Disney has done yet. This year the focus seems to be, logically enough, on the Clone Wars series with most of the special guests being voice actors from that series. However, Anthony Daniels (C-3P0) Peter Mayhew (Chewbacca) and Jeremy Bulloch (THE ORIGINAL MOTHER EFFIN BOBA FETT!!) See a full list of guests here.

Disney will be releasing Dumbo on September 20th to Blu Ray in time for it’s 70th Anniversary. 70 years?!? And the Dumbo ride is still one of the most popular rides at Disney. Hmmm…sounds like Disney needs to stop worrying about what the new hot thing will sell and concentrate on old ideas. Get all the Special Feature details here.

Universal
A Universal employee was arrested, and fired for stealing theme park tickets in the amount of ONE MEELYON DOLLARS!! Crazy amount of tickets. Apparently she was in charge of giving out tickets to employees, something Universal does for the friends and families of the employees and she had been taking them and giving them to people she owed money to. Stupid. Read the story here.

Everyone knows that Police really do not get paid enough for what they do, but you also look to police to do the right things. An officer has been reinstated after being charged with stealing over $300 dollars in Harry Potter merchandise from Universal Orlando last year. I know stealing is wrong, but this IS Harry Potter…well…okay, so I’ve bought everything I have from Wizarding World and I’m dirt poor, so no excuse. This was the officers first offense.

If you were looking for a reason to go to Mayhem over Memorial Day weekend, we have one more guest announced. And it’s a big one. Sure, they already have Ted Raimi, Bruce Campbell, Anthony Michael Hall…but now…They have BRUCE THE SHARK FROM JAWS! For more info and tickets visit the official Spooky Empire website.

Kings Island
Kings Island opened Saturday for seasonal operation, but it did so without the two new attractions it had planned for the season. Unrelenting rain and wind have been the reason that Windseeker hasn’t been able to complete testing. And Dinosaurs Alive is now expected to open May 26th, right before Memorial Day Weekend. More here.

The Dania Beach Hurricane has closed. It’s old news by now, but according to this story, Boomer’s the entertainment venue that neighbored the coaster isn’t worried about business. The coaster has not seen regular operation in some time, but it was still a beloved coaster amongst South Florida residents. It’s not known if anything will be done to the coaster, or if it will remain closed.

Before we were finding Nemo, we were explorers at SeaBase Alpha. A highly advanced sea exploration center that studied the behavior of life on the ocean floor. You took Hydrolators, elevators that transported you to the ocean floor and then rode a Seacab through the various tunnels and viewing areas of the ocean around SeaBase Alpha. The beauty of it, you could learn something without knowing it..and journey back to the surface of Orlando within minutes. That makes the Living Seas (not the Seas with Nemo and friends) your ride of the day.