The “Year to be Here” continual at Universal Orlando continues as Universal Studios readies two new attractions. The Cinematic Spectacular is already in test rehearsals, and will be premiering May 8th. Now Universal is teasing yet another attraction openings on May 8th. 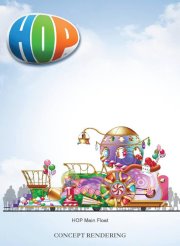 The Superstar Parade will feature all new floats from some of your favorite characters. Through the official Universal Orlando Facebook Page the park has given a glimpse at one of the elaborate new floats.

Hop is a Universal Picture, and features the Easter Bunny, chicks and more. Universal gives us a glimpse at what we can expect from this float. Other floats will include Spongebob, Dora the Explorer, and Despicable Me.

The parade will run all summer and will premiere May 8th.