Great Scott! Back to the Future to be a musical in 2015

This is heavy. 2015 is right around the corner, and while certain promises of the Back to the Future series won’t come true, like flying cars, hoverboards, and JAWS 19, the series will bring us something completely different. It will disrupt the space time continuum! In 2015, the curtain will be drawn on Back to the Future-The Musical! 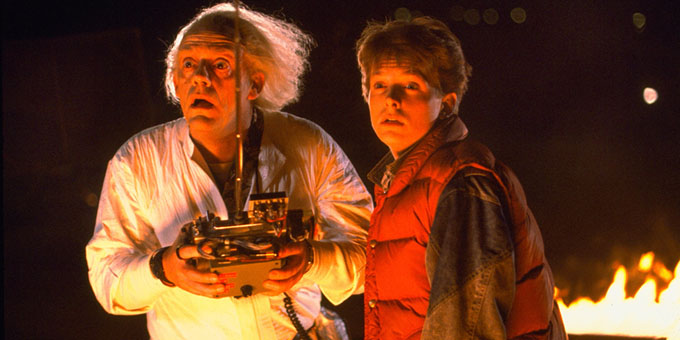 It’s official, Back to the Future will hit the stage in 2015 just in time for the film’s 30th anniversary. While this may sound like it could rip apart the space/time continuum, it’s actually something that has been in the works for over 15 years, and is being put together by the creators of the film.

Film director Robert Zemeckis and producer Bob Gale will be working with Universal Stage Productions and Amblin Entertainment to bring the show to life. It will first premiere in London, and hopefully eventually brought to Broadway. The show will feature all new music by Alan Silvestri and Glen Ballard. It will also include music from the film, including Back in Time from Huey Lewis & The News. The show is even going to have skateboarding antics, which means it will be fairly faithful to the original film.

“The Back to the Future Musical is a project that Bob Zemeckis and I have been exploring for almost ten years. We’re thrilled to be at last in partnership with a creative and producing team that will create a show that is true to the spirit of the film without being a slavish remake. Director Jamie Lloyd is full of passion, energy and imaginative ideas and we are overjoyed to have the film’s composer Alan Silvestri composing the music, with lyrics by Glen Ballard who has also collaborated with Zemeckis before on many projects. With all of us working together, we know the integrity of the material will be preserved in a production that will be a wonderful companion to the Trilogy. We intend to use music from the movie along with brand new songs to make a version of Back to the Future that is fresh, entertaining, and takes advantage of all the amazing things that can now be done on stage. We can’t think of a better way to celebrate the 30th anniversary of the film.”

Back to the Future has been the part of three movies, video games, a theme park attraction and even a Saturday Morning Cartoon. The 1985 film has stood the test of time, and is seen as a modern classic. It has also brought us promises of the future that many scientists are using as a basis to create real items, and changed the theme park industry when Universal Studios Florida first premiered the attraction. The film will celebrate it’s 30th anniversary in 2015.

Stay tuned as we find out more about Back to the Future:The Musical…and Jiggowatts…Be sure to follow us on Twitter @BehindThrills for the latest udpates!