Talk about kicking off a festival with a bang! Busch Gardens Tampa will kick off their Seventh annual Bands, Brew, BBQ event with two different ends of the musical spectrum as the park amps up for 2014. The event is returning to both Saturdays and Sundays for the next few weeks at Busch Gardens Tampa. 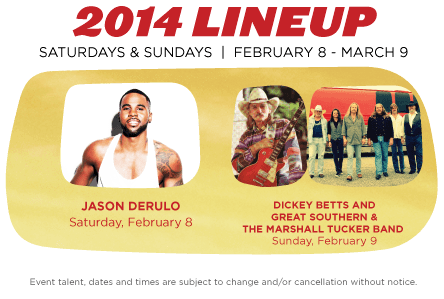 On Saturday February 8th Jason Derulo will take the stage at 5p.m. In Gwazi park. On Sunday February 9th the party continues with Rock-n-Roll Hall of Famer Dickey Betts and Great Southern, followed by The Marshall Tucker Band.

All concerts are included with theme park admission and seating is on a first come first serve basis. Busch Gardens Tampa has faced backlash after the release of the anti-SeaWorld film Blackfish Caused protesters to gather online petitions to keep bands from playing at both SeaWorld and Busch Gardens parks leaving bands like Pat Benetar and the Beach Boys to cancel. These two bands, much like the bands now scheduled at SeaWorld are a definite step up from those who caved in under pressure.
Still, the music is only a small portion of the event. The park is once again bringing back the mouth watering BBQ and the unlimited beer wristband.

The beer lineup at Bands, Brew & BBQ will showcase more than 100 imported, domestic and craft beers.

Select brews are available at each of the tents along the Bands, Brew & BBQ pathway, as well as in Gwazi® Park. For those looking to sample several of the specialty brews, unlimited sampling is available from noon to 5:30 p.m. every Saturday and Sunday with a beer sampling wristband.

Wristbands are $30 per person (ages 21+), or 2 for $50 for active Busch Gardens® Tampa Pass Members, and also include sampling privileges at the Desert Grill® restaurant, Crown Colony® pub, Garden Gate Café and Zambia Smokehouse.

Beer selections are subject to change.

Each weekend different chefs will be cooking up their specialties:

Restaurant partners are subject to change and/or cancellation without notice.

That is a tasty list! VIP tickets are currently available but go very fast. They give you priority seating and in some cases food!

For more on Bands, Brew, BBQ stay tuned as bring you the latest. Be sure to follow along on Twitter @BehindThrills for the latest updates.

TAG2014 Attractions Bands brew BBQ bgt Busch Gardens Tampa
Previous PostGreat American Thrills hopes to bring a bit of history and fun to television with your help Next PostGreat Scott! Back to the Future to be a musical in 2015