Artwork shows off what could be Universal Orlando’s Fourth Gate 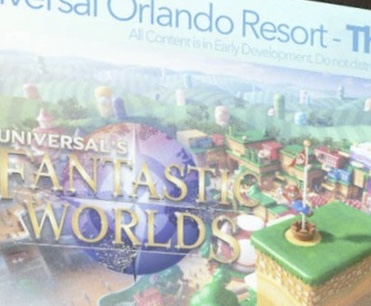 It’s on Twitter, so it’s out of the bag. What looks like a presentation has confirmed that Universals Fourth Orlando Park will be called “Universal’s Fantastic Worlds”.

The information comes via a tweet by Alicia Stella, and a picture from @Jacqueshca

Ladies and gentlemen, I give you: UNIVERSAL’S FANTASTIC WORLDS!

We also have the first bit of information on Nintendo at Universal Orlando. The Fantastic Worlds graphic we see above has Super Nintendo Land, with the same Super Mario artwork that we’ve seen for Universal Japan. While we knew that Nintendo is coming to Orlando, this is the first solid piece of artwork for it. The land has been rumored for Universal Studios Florida, and Islands of Adventure, as well as being saved for a new park. If this is indeed artwork for a new park, then Nintendo will find it’s first Orlando home in the new park.
Now let’s stress that this is one piece of artwork, and it’s not really a good look at it. So we’re still going to keep this in the realm of rumors.

Here’s why- There doesn’t seem to be anything else besides Nintendo. It’s obviously a leak, since it’s only a piece of the picture.

What’s in the rest of the picture? There’s something else after “Universal Orlando” that we can’t see.

Plus I can’t help but to think of the old Universal Escape. That’s what Universal Orlando was called when Islands of Adventure and CityWalk first opened. That was later dropped, and we got Universal Orlando. It’s unlikely that it’s the case here, but we don’t know for sure either, despite the copyright for Fantastic Worlds saying that it would be used for a theme park, shows and more.

Still, we want more Fantastic Worlds! This first piece is exciting and we can’t wait to hear official details.

The biggest thing that we can take from this is that Universal Orlando is growing, and in big ways. The company has over 500 acres of land just ripe for a new park in Orlando, so it’s just a matter of time. We also think now is the perfect time for a Universal vacation, before things start drastically changing and moving around.

Special thanks to Alicia Stella for sharing the cool new look.

Now if we can just get official confirmation from Universal Orlando and more information!