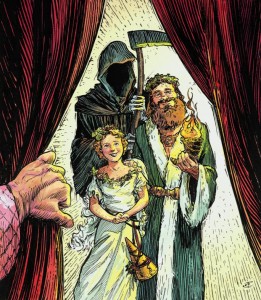 Bah! Humbug….never have there been more famous words than these associated with Christmas. The Charles Dickens tale of greed, and self absorption being transformed into charity, and goodwill is one that is as familiar as the story of Christmas itself. First published in December 1843, the book tells the story of a soured old man who is especially difficult to deal with at Christmas time. That man’s name is synonymous with being miserly and miserable. Ebenezer Scrooge starts out the story a greedy miser who cares nothing of anyone but himself.

One night he receives a visit from three spirits, each representing a part of Christmas. First he is visited by the doomed spirit of his business partner, Jacob Marley. Like Scrooge, Marley was preoccupied in life with making money for himself and not thinking of those around him. He warns Scrooge that he is in for a similar fate to his own unless he changes his ways. Scrooge dismisses Marley as nothing more than a hallucination, and realizes he is wrong when he is visited by three more spirits. The ghosts of Christmas past, present and future.

Each spirit takes Scrooge on a journey to show him how Christmas was, is and can be if he doesn’t change his ways. Realizing what a jerk he’s been this whole time, and fearing of dying alone, he turns his life around and becomes not only a great person at Christmas but year round, letting joy fill everyone’s heart whom he meets.

The book has had one of the longest lasting impacts on the world. It is credited as being the reason we essentially took Christmas from being a holiday about Church and worship and have made it about family and giving. In fact, it is given credit as the one thing that pretty much saved Christmas as it was in a steady decline in the late 18th to early 19th centuries.

In addition to instilling a spirit of giving with the masses, and giving monarchs special cases of the warm and fuzzies (the Queen of Norway once sent gifts to London’s crippled children with notes reading “with Tiny Tim’s Love”) it has influenced the world of theater, literature, and cinema like nothing else before it or since.

Never have we needed an impact and a reminder of what Christmas truly should be. It’s more than just gifts and church, food, and gatherings. Christmas comes from a place that means so much more than all of that. It’s about love, and family and a feeling that we get that should we be so lucky we carry with us the whole year through.