It’s been in the works for nearly two years. Saturday, guests finally got a first glimpse at the all new parade that features tons of characters that kids and adults both love. The Superstar Parade made the first daily trip down the streets of Universal Orlando with four all new floats, tons of new characters, and loads of energy. The new parade will run throughout the summer and will be the feather in the cap of all the new family entertainment lasting all day long. 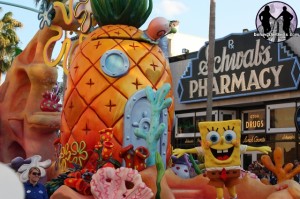 “We wanted something that the entire family could enjoy” said Show Director Lora Wallace about the all new show “From the littlest kids who love Dora and the other characters, to the older kids, to even mom and dad. There’s eye candy everywhere for everyone”.

The new show features four all new floats themed to some of the biggest names in family entertainment. Spongebob Squarepants, Dora the Explorer and Diego, Gru, the minions and the entire cast of Despicable Me, and even Chicks, bunnies and candy from HOP each adorn their own floats. Tons of other characters also make an appearance, each one inspired by the main characters and the shows and films they represent. Each one also adds to the fun and party atmosphere that the parade creates. We’ll take a look at each one of the floats and some of the characters. 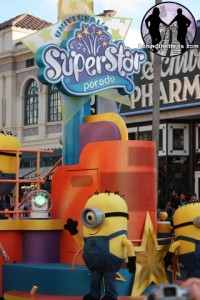 To kick off the fun are the ever lovable Minions from Despicable Me. There are a lot of them. Minions ride ahead of Gru and the girls dancing and bopping along to the music. 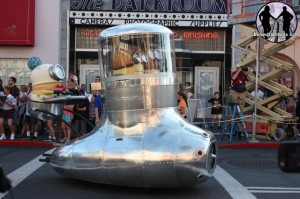 The very cool thing about the parade is not only are there four huge floats, but there are also several smaller vehicles, and tons of characters. This one was a favorite as it roamed around seemingly unmanned. 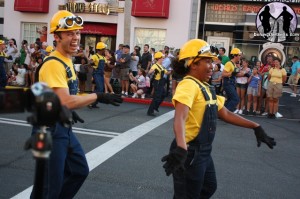 Also adding to the fun are several dancers. Each group designed in the spirit of the huge float to come. For Despicable Me, we have several “Minion wannabes”. They have the spirit and fun of the minions, they’re just a tad too tall…for now. 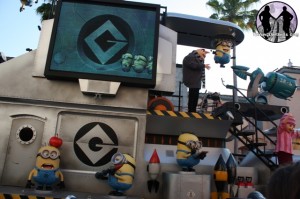 Gru and the girls ride along on a huge replica of his “car”, and it’s covered in minions. There are minions absolutely everywhere. The level of detail is amazing, and lends to a ton of fun in spotting all the different things.

No parade would be complete without Spongebob Squarepants, who is easily one of the most popular characters at Universal Orlando. 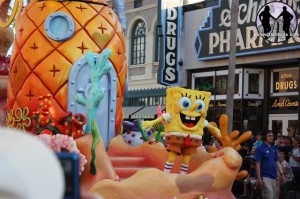 Spongebob comes riding his Pinapple under the Sea through the streets of Universal. And besides Mr. Krabs, he’s brought ALL his friends. 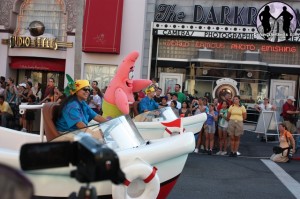 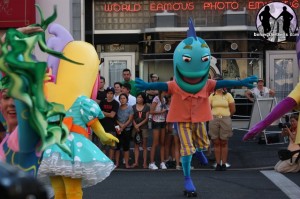 Patrick comes racing by on a boat, and a school of roller skating fish come scooting by. Again, the level of detail is the most amazing part. Each of the characters are completely new, especially the fish. Spongebob and Patrick also have a new look about them, and they seem more mobile than ever. The fish are some of the coolest costumes that have ever been revealed, each one looking very familiar from the show. 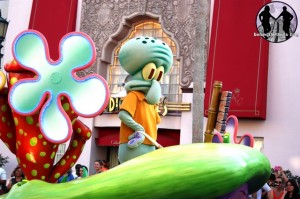 And yes…Squidward is there too. 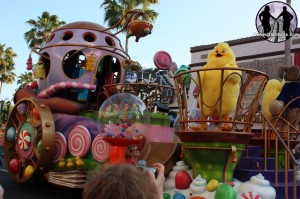 EB and all the gang from HOP come in on a huge Candy Factory. Of course, EB isn’t doing his Easter Bunny duties, he’s busy playing the drums. 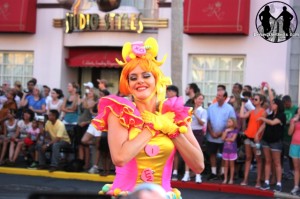 Lollipop girls and boys bring up the rear and we get a glimpse of all the chicks and more. There’s even a Drumline.
More Hop:

Dora the Explorer has been huge since my kids were little. It’s amazing that not only are they still going strong, but more popular than ever. Little kids across from us were in tears, they were so excited. It was like seeing a group of teens swoon over Justin Bieber! 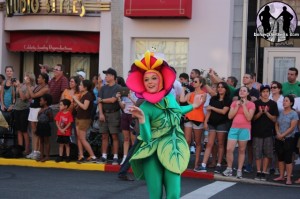 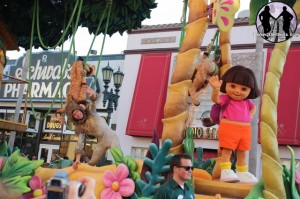 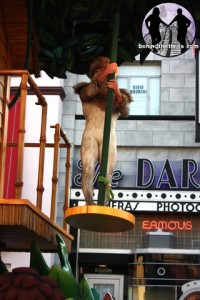 Dora’s Group has the most energy, and the most going on. We have people on bikes, there’s monkeys dancing and swinging on vines, even flowers and plants come to life. Dora wraps up the parade and sends everyone out dancing and clapping.

More than just a parade

While yesterday we were able to get a glimpse of the parade, there’s more to the Superstar Parade than just the parade. The parade stops twice along the parade route, and the characters literally come off of the floats. Some of the floats come alive with characters that you might not have noticed. We happened to be standing right where Spongebob stopped. We saw the coral come to life, Jellyfish acrobats, and even Spongebob came running down for a little “boat ballet”. The parade stops on Hollywood Boulevard in front of Mel’s Drive-In, and in New York in front of the Mummy. You can literally see a different parade every time depending on where you stand to watch.

Like we said, the parade is the feather in the cap. Throughout the day the characters line up the streets of Hollywood and interact with the guests like never before. During parades like Mardi Gras and Macy’s you get to see the character for meet and greets. Now the characters will be around for interactive shows. Thirteen shows in all give guests plenty of time to interact and play with really neat characters.

Here’s our video of the entire parade run, including the dance break
httpvh://www.youtube.com/watch?v=bVzCyXBFjaM

Personally I loved the parade. It was a great addition that the park needed during times between big events like Mardi Gras and Christmas. The only thing I had issue with was the length of the stop. It seemed a little too long, but it’s not really about how long the stop is, it’s the interactivity with the crowd that matters. I also would have loved to seen the parade itself be longer with more characters, and more Universal references. One of the things I had my fingers crossed for was an E.T. section of the parade that had kids on bikes jumping a car. Call me sentimental. The problem is that while E.T. is a great ride in the park, most kids won’t understand the reference. As it stands the parade catches the attention of kids and adults and does a great job with keeping that attention.

For more information on the Superstar Parade, or for Universal Orlando tickets, visit the official website!