I am not a fan of the Silent Hill games. Let’s get that right out in the open. I’m a fan of horror, but something about that series of games…they scare the living hell out of me. Maybe it’s the demon babies that you have to kill, or maybe it’s the faceless nurses, I don’t know. It just scares me to the point that I can’t play them for more than an hour, let alone with all the lights in the house on. When the first movie came out, I avoided it, hearing that it played much like the video game. But Universal Orlando and Hollywood are going to have houses at their Halloween Horror Nights events…and like the characters in the movies, no matter how hard I struggle against it, I’m pulled right in. 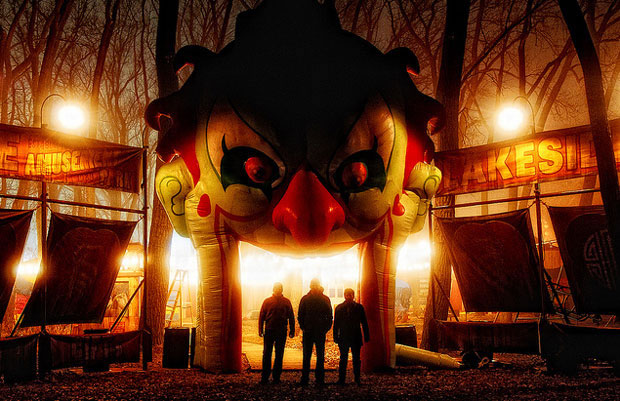 Since the house was announced at San Diego Comic-Con a few weeks back, I’ve visited the movie. It was disturbing, confusing and ended on a solid note that had me floored. The movie studio didn’t have the trailer ready during Comic-Con, instead showing off the faceless nurse fight. But they have since rolled out a trailer for the film that opens in October.

For those unfamiliar with the games, this trailer seems to open the door for a look into what we could possibly expect. We see nurses, a giant menacing figure with a pyramid head and a huge sword swinging into a corridor of flailing arms. Chains, fire, creepy little girls, and of course the carnival.
Halloween Horror Nights has a knack for taking concepts and ideas and bringing them to life in a way that you could never imagine. It’s always a wonder to walk into a building and feel like you’ve just stepped into another realm, or out into a neighborhood. Last year Universal Orlando’s Halloween Horror Nights had guests walk right into the middle of World War 1 with Nightingales:Blood Prey. Guests were transported into the barracks, and trenches of a WWI battlefield, complete with tanks, and bombs. In Winter’s Night:The Haunting of Hawthorne Cemetery, guests walked into a soundstage in Orlando Florida to find themselves in a northern town, in the middle of winter. Cold, and snow helped to throw guests into the fantasy that Universal creative sculpted. Now this year, the fictional town of Silent Hill, the place where Hell comes to earth is being brought to life.
The trailer above shows glimpses of what we could possibly see. Kim Grommoll and the rest of the creative team have the arduous task of bringing that world to life for fans of the films and games alike. So what do you hope to see in Silent Hill? Let us know what you think.
For more information about Universal Orlando’s Halloween Horror Nights, including tickets, visit the official website!
For more information about Universal Hollywood’s Halloween Horror Nights, visit the official website!