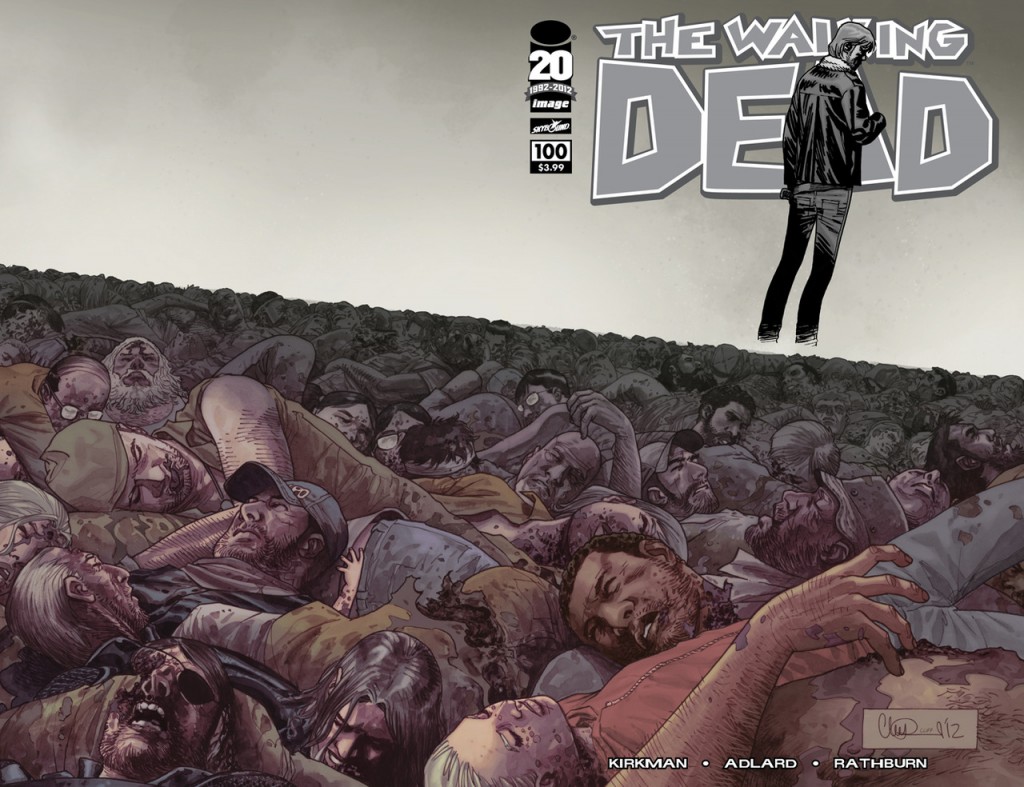 We love ALL things Walking Dead, including the comic book series. Last weekend Image Comics launched the 100th issue of the popular series and it quickly became one of the best selling comic books of all time.

Robert Kirkman’s Eisner Award-winning The Walking Dead comic series for Image Comics/Skybound reached its milestone 100th issue and instantly sold out of its 383,612 initial orders on July 11th, the same day it was released, effectively becoming the best-selling comic book in initial orders for any publisher since 1997, when Image Comics/Top Cow’s The Darkness #11 was released. The Walking Dead, created and written by Kirkman with art by Charlie Adlard, featuring 13 variant covers for the 100th issue — all sold out — has been the talk of San Diego Comic-Con with a series of events celebrating its release. Kirkman is a partner in Image Comics, the first person invited to join the comic book industry’s premier publisher of creator-owned comics since its inception twenty years ago.

“This is a remarkable achievement,” said Image Comics Publisher Eric Stephenson. “It’s extremely uncommon, if not flat-out rare, for a comic book to see a sustained increase in sales following its first issue, but The Walking Dead steadily climbed up and up since its launch in 2003, and we couldn’t be more proud of Robert, Charlie and the whole Walking Dead team.”

“The Walking Dead continues to greatly exceed all my expectations in all forms,” said Robert Kirkman. “I am especially excited for what this means for comics as an industry, that this is an independent comic hitting that number.” Kirkman continued, “The future of comics couldn’t be brighter as more and more readers are embracing new ideas in a big way.”

On Wednesday night, Hyundai, Future US, and Kirkman’s Skybound imprint at Image Comics unveiled the Kirkman-designed Zombie Survival Machine from a transformed Hyundai Elantra Coupe. On Thursday, Skybound and Ruckus Sports unveiled The Walking Dead Escape: San Diego, an obstacle course where anyone could live the experience of being a zombie apocalypse survivor and effects whiz Greg Nicotero and team transformed participants into one of the undead.

Kirkman will give away a Hyundai Elantra GT wrapped in Charlie Adlard’s iconic cover of The Walking Dead’s 100th issue, which was on display Friday night at Petco Park during the private The Walking Dead 100th Issue VIP Black Carpet Event. The exclusive party featured a fully immersive recreation of a post-apocalyptic world infested with zombies.

The Skybound booth at Comic-Con, #2729, featured a slew of exclusive merchandise, including The Walking Dead #100 Vannen Watch, The Walking Dead Bloody Michonne Variant action figure and The Walking Dead Hardcover Compendium, which collects issues #1-48 of the iconic comic series.

The Walking Dead topped the bestseller lists for graphic novels in 2011 and frequently topped the New York Times and Amazon’s bestseller lists, taking the top five spots on hardcover and paperback lists. Kirkman is also the executive producer and writer of the hit television show, AMC’s The Walking Dead, the highest-rated basic cable drama of all time in the U.S for season two. Friday’s AMC panel was one of the hottest events at Comic-Con. The show is also an international success in 120 countries, showing in 250 million households worldwide.

Check back for more SDCC and Pop Culture news here!