In two weeks the walkers will be off their leash, the puppeteers will start their games and the evil that has taken root will be revealed. Halloween Horror Nights at Universal Orlando opens on September 20th, and it’s time to plan your survival! What looks like the official map has been revealed, and it’s time to make your best plan for survival. We’ll give you some tips, tricks and hints to get through all of the houses, as well as the best ticket add-ons and options to make your trek of survival the best it can be. 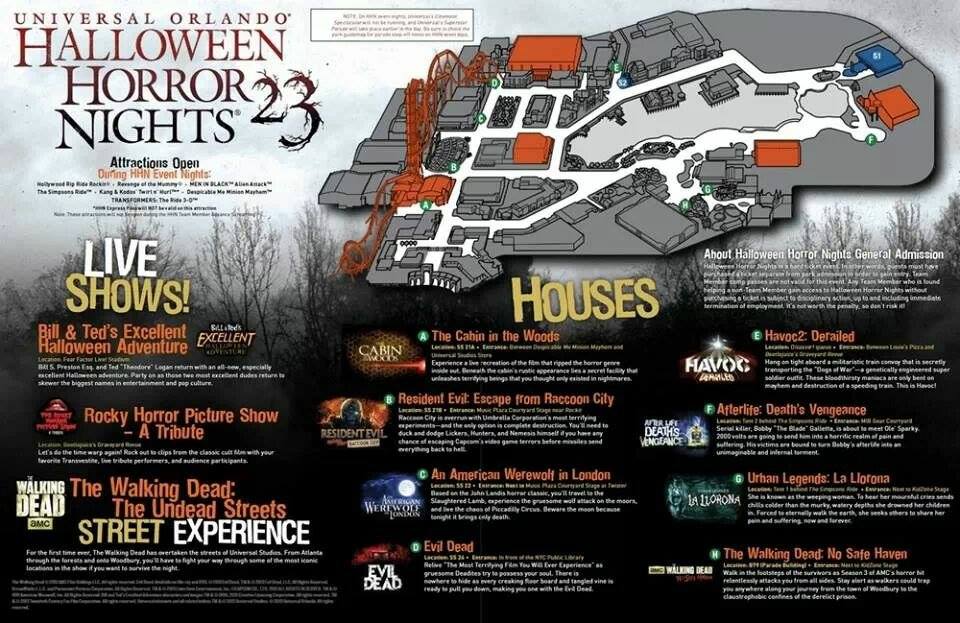 What appears to be an official map has surfaced, showcasing all of the haunts and open attractions. While we have known what the line up has been, we are now able to see where all of the houses are, which gives us two great pieces of information…where exactly will these houses be, and how to get through them efficiently.

While the final map may change, this is pretty much a good guide to get started with your planning, after all Halloween Horror Nights is a huge event with many different elements, and it’s very easy to get turned around and miss some of the great experiences.

So how do you get the most out of your Horror Nights experience? Let’s come up with a simple plan.

On event days Universal Studios Florida closes early, usually around 5p.m. They close in order to get the park ready for Halloween Horror Nights. With a stay and scream ticket, you can stay in the park when it closes in certain designated areas. The park usually opens let’s the area go into the park early to experience the houses before the crowds get through the front gate. All you need is a daily ticket, and a Halloween Horror Nights ticket, and you’re set! This works if you have an annual pass as well.

If you were planning on being in the park anyway, you can add on a “Stay & Scream ticket” for as little as $39 dollars, depending on the night you’re going to Horror Nights. Click here for more details!

Order of the houses

Now that you have tickets, it’s time to talk about which houses you’re going to hit first. You probably have a “MUST SEE” house, but trust me…skip it, and see it in order…or your wait times could end up being longer.

Let’s start with the sound stage houses. Here’s a suggested order to complete your houses:

We chose this order because of the way the lines form and exit. Cabin in the Woods is going to be the house that people see first, so it will be the house that gets busiest the fastest. Cabin in the woods should let out near the entrance to Resident Evil, which makes it easier to just jump in line for. Resident Evil, An American Werewolf in London and Evil Dead all should exit in the same places. Going right down the line of the entrances is likely the best way to make sure you see everything.

Back of the park is a neatly clustered group of houses that start in Kidzone (near ET and Barney) and end near Men in Black. So here’s the suggested order of houses:

After that we highly suggest hitting Bill n Ted, then Rocky Horror. They are both really good shows, and by then the lines for the houses should be through the roof. Also, if you have a hankerin for some rides, do the rides either during Stay n Scream (before Horror Nights starts) or after you’ve seen all the houses and shows. Many of the rides have single riders lines and can cut your wait time.

So here’s the line up of houses,and shows in the order we suggest to do them:

Of course there’s no guarantee that this order will work, or that you won’t wait in line, but it has worked for us in the past. However there is only one way to guarantee that you not only see everything, but you wait in shorter lines.

There are two ways to “Skip the Lines” at Halloween Horror Nights, but they are going to cost you extra. They are both completely worth it if you’re not into waiting in super long lines, and have a limited amount of time.

Halloween Horror Nights is a separate ticket event, and is not intended for young children. In other words, it’s not included with your daily park admission, and it’s not for kids…at all.

Stay tuned to us for more information, fun and surprises about Halloween Horror Nights 23 in Orlando. Be sure to follow along with us on Twitter @BehindThrills for the latest fun and surprises!

For more information about Halloween Horror Nights, including tickets, tours and more, visit the official website by clicking here!