It’s been a very busy weekend for Universal Orlando, with two all new shops opening at CityWalk. The park not only opened the all new Menchie’s Frozen Yogurt on Saturday (click here for full review)  but on Sunday, the all new Universal Studios Store opened their doors to a huge new refurbished store. The store is part of the massive overhaul for the resort’s CityWalk district, and one of many major projects happening at Universal Orlando this year!

The Universal Studios Store briefly closed down earlier this year for a massive overhaul. The store had a temporary tent store, where some basic items could be purchased. The biggest difference in the store is the outside facade. The store went from having old logos of attractions to having a stylish Universal logo. The “Stage 28” window looks to be the seasonal window that will change, while the front of the store has LED screens that play the Universal logo. 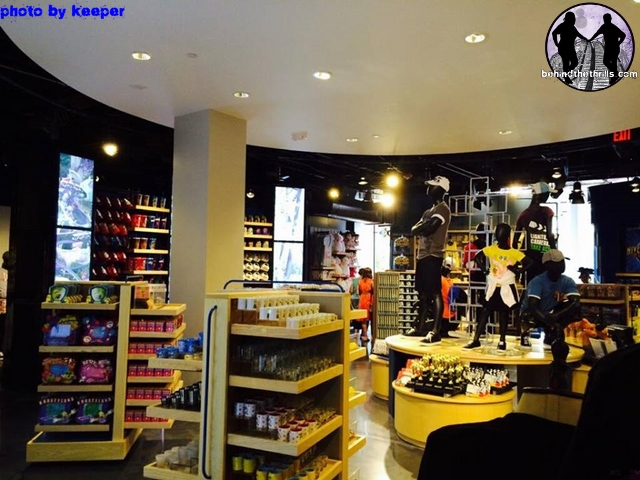 Inside, the store has tons of merchandise from inside the parks. T-shirts, tennis shoes, and tons of different pieces of memorabilia. It’s great if you either forgot something from the parks, or if you just don’t want to run all the way into the park for a shirt. There is one great shirt that we didn’t see in the parks yet, and it’s a huge nod to the creatures of The Wizarding World of Harry Potter. Tons of magical beasts, such as owls, Hippogriffs, werewolves and even the gorgeous phoenix.

The shop is full of fun characters and merchandise, and is open longer than the parks, usually, so that you can get beat the crowds in the gift shops on your way out. The new Universal Studios Store is one of the many new venues opening at Universal’s CityWalk this summer. So far the area has already opened Red Oven Pizza, Antijito’s Authentic Mexican, Starbucks, Cold Stone Creamery, and Menchie’s. Later this summer CityWalk will open Hot Dog Hall of Fame, Vivo Italian, Breadbox Sandwhich Shop, and The CowFish gourmet burgers and Sushi.

For more information about CityWalk at Universal Orlando, including tickets, visit the official website by clicking here!