Big Hero 6 is about to take the world by storm when it hits theaters this November.  It’s the first Disney animated film based off of a Marvel comic.  To say that it has the potential to be the next instant Disney classic is an understatement.  The characters from the film will also make their way into the park this fall, giving guests the chance to meet and have some fun with the heroes in person. 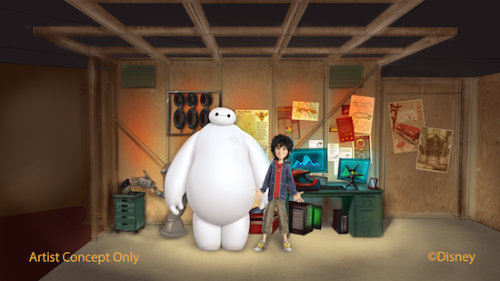 We finally get a look at what we can expect to see when the team makes their debut in Disney parks. The concept art shows both Baymax and Hiro in a workshop,  ready to meet guests.
It’s hard to determine from the artwork, but it appears we will be seeing a person play Hiro, while Baymax will be a big fluffy suit, before he’s armored up.
The meet and greet will be at both Disney’s Hollywood Studios at Walt Disney World in Orlando,  and Disneyland in California. Guests at Disneyland can already get a special sneak preview of Big Hero 6 in 4D at the Magic Eye Theater in Tomorrowland.
There isn’t an exact date for the meet and greet premiere just yet, but it will most likely be just after the film makes it’s debut.
Stay tuned for more from Disney, and be sure to get social with us on Facebook and follow along with us on Twitter @BehindThrills for the latest updates!
For more information about Walt Disney World, including tickets, visit the official website by clicking here!