Kellytorial: Where does the madness (and costs) end at fan conventions?

I feel incredibly lucky to live in a state (Florida) that continues to have many amazing conventions that take place year around- so many in fact that many friends and I are beginning to refer to the months of April to October as “con season”. The opportunity to meet my favorite actors to tell them how much I love their work, pay money for an autograph, photo and a incredibly cool story I can brag to my friends with is so fantastic. As soon as one con ends I am planning for the next one to begin. It’s a fun hobby, but it’s also a very costly one…and it’s only getting more expensive. 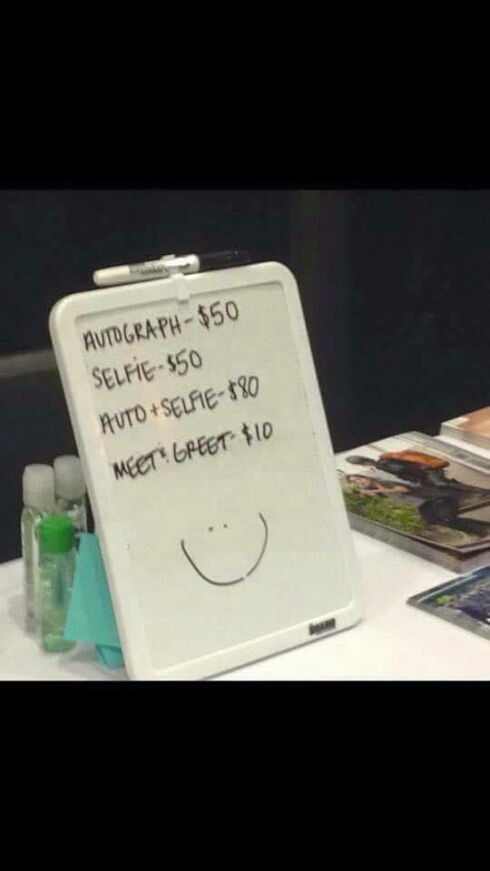 Let’s start out by saying that I am one of the biggest fans of horror and the Walking Dead. I feel that the writing, the acting, and of course the incredible makeup created by the KNB effects team is one of the best on television. I love meeting the actors and creators who make my Sunday night ritual possible.

Most people who go to cons will have stories about the “good ol days” of conventions. Autographs were starting at $10 and the most you paid for was $30 dollars for a “headliner” like icon Robert England or director John Carpenter. Even young whippersnappers like me can remember 2011’s Spooky Empire’s Mayhem line up with Norman Reedus ($20), Greg Niccotero ($20), Steven Yeun ($15 to sign your own item, $20 to buy a photo off the table), and Chandler Riggs ($20). Keep in mind this when the show had just begun and it had just been announced that a second season would take place. Fans could see the celebrities wandering around the hotel after Spooky Empire, and some of us were able to have a beer with Norman and Greg around the pool.

As the shows, popularity grew- of course- so did the prices. Celebrities and their agents could start charging fans more and fans like me of course would keep forking over the cash. They are more than justified in doing this and frankly I can understand it- Norman Reedus and Steven Yeun have raised their prices exorbitantly charging around $80 for just an autograph. With a show as volatile with their character deaths as Game of Thrones, none of the actors have any idea if they will be employed by the show the next month. You have to be able to make money while you can.

Recently at a convention that took place over the weekend, several reports (including one from Todd’s Autographs) came in of some Walking Dead actors (Alanna Masterson and Lawrence Gillard) charging $10 for a meet and greet. This isn’t the same kind of meet and greet fan experience that icons like Stan Lee, George Takei and William Shatner charge for with an hour or two of mingling outside of the convention hall. This is the ” I just wanted to say hi” thing that fans do at convention tables without buying autographs. Of course, if you are trying to earn money for taking pictures, people just saying hi can take up space and time for those willing to pay for a picture. It can POTENTIALLY gum up lines and turn away people who are willing to pay for an autograph. However, if there are no lines, is there anything wrong with saying a quick hello as long as it doesn’t effect anything?

Have these events become such a cash grab that the fans now have to pay another $10 to give their favorite actor praise? Fans have already paid money to attend and many celebrities (not sure if the ones in question here were) are paid a guarantee.

When autograph prices are raised, and ridiculous things are charged for it, it hurts the reputation of the convention and celebrities. It also can hinder vendor sales because the more money attendees have to pay for seeing their favorite celebrities, the less money they have to blow outside the autograph room, and most importantly it hurts the fans.

I don’t think I’ll be buying any “meet and greets” anytime soon from Lawrence Gillard or Alanna Masterson. Nor will I be buying an $80 autograph from Norman Reedus. But I will buy him a round…at the bar.

Stay tuned for more as convention season kicks into high gear, and be sure to get social with us on Facebook and follow along with us on Twitter @BehindThrills for the latest updates!