A terrible accident happened today AT Alton Towers in the UK, as the coaster with the most inversions in the worls, The Smiler, has crashed.  The accident has sent at least four people to the hospital with very serious injuries,  and has trapped at least 16 others on the coaster cars.

The coaster, which boasts the most inversions in the world, was reported as having a serious collision around 2 p.m. in the United Kingdom.  According to reports,  two coaster trains collided. The trains were then stuck on the track at a height of 25 feet in the air, at an angle of 45 degrees, making it difficult for rescuers to evacuate the riders.
Four of the most seriously injured were removed from the coaster, and transported by air to local hospitals. 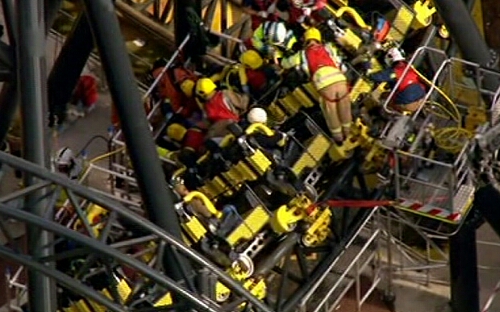 The Smiler has 14 inversions, giving it the world record. The ride is manufactured by Gerstlauer, and has seen problems before. It originally opened in 2013, and was closed several times due to malfunctions and difficulties. At one point the ride was shut down after a bolt had fallen off the ride.  Another point the ride had come to a complete stop, leaving riders stranded almost 100 feet off the ground in a vertical section of the ride. Another incident saw the ride closed when plastic guard wheels came off and hit riders in the front row of the train.

The blame game is going to immediately happen, with both Alton Towers and Gerstlauer, wanting to distance themselves from the incident.  Gerstlauer doesn’t have the best track record, as a rider on a Texas coaster fell to her death after a restraint malfunctioned. The Texas Giant, at Six Flags Over Texas, had trains manufacturered by Gerstlauer. A woman was thrown from the coaster, and died. Gerstlauer and Six Flags settled with the family out of court on that case.

This latest incident brings up another question. Are coasters really safe? The answer is a resounding yes. Parks like Alton Towers have an exemplary track record, with most rides being inspected several times weekly. Unfortunately,  freak accidents do happen. Coasters get a bad reputation because of their thrilling nature, and the dangerous looking way they send riders sparing through the air, and through twists and turns. Statistically, riding a roller coaster is safer than doing chores around your own home, driving a car, and going yo the beach. Theme parks are in the business to make you think that something dangerous will happen,  all while being as safe as possible.

As for the smiler, there is no word on what caused the crash, but the park and other agencies will be investigating the incident. According to eyewitness reports, the first train involved “vallied”. A valley happens when the train doesn’t make it all the way up the next hill, causing it to roll backwards. The next train apparently wasn’t stopped in the brake block, and came down the hill, slamming into the stopped train.

The park will be closed Wednesday, due to the accident. In a statement the park said: “All guests with pre-booked tickets, or those who arrive at the theme park, will have the choice of either having their tickets revalidated for an alternative date or a full refund.”

Footage that was shot immediately after the crash shows an empty car sitting on the track, while a car full of passengers is seen coasting back and forth. Apparently the empty car was sent through, and had come to a stop on the track. The second car passed through a “blocked” section, which is full of sensors, and normally prevents this from happening. The second train then came through a loop, crashed into the stopped car, and was jolted backwards through the loop, before coming to a stop on the tracks.

Other than the four, the remaining 12 were finally taken off the coaster, and suffered only minor injuries.

While minor incidents, involving coasters stalling on the tracks, happen all the time, the safety measures are what keep accidents like this from happening. Unfortunately people were hurt, but not as many as there could have been.

“At this point I don’t know if it was a technological or a human error,” Nick Varney, chief executive of Merlin Entertainments, which runs the resort, wrote in The Sun on Thursday.

“We want to know if this issue is isolated to The Smiler. We can’t open again until we’re sure.”

According to early reports, and rumors, the ride could have been left in a “maintenance mode” which would have allowed for an override of the safety system. According to eyewitnesses, the train with the passengers did come to a stop at the top of a lift hill when the sensors sensed the other train on the track, but it started back up again a few moments later and sent the train full of passengers on it’s way. While these are unverified reports, the coasters’ safety system is in place to prevent this from happening. It seems like Alton Towers management is aware of this, and feels that it could have been error on the part of the operators, which is why the park remains closed. It could be a problem of improper training, or employees not following procedures, and that could lead to some serious accidents on other coasters in the park.

If anything else, the accident is a wake up call to operators that accidents can happen and every single procedure needs to be followed.

In other Smiler news, park officials are now debating on whether or not to dismantle the ride, after the laundry list of problems that the coaster has had since opening.

Stay tuned for more,  and be sure to get social with us on Facebook and follow along with us on Twitter @BehindThrills for the latest updates.