As we reported last week, Disney Quest will close in 2016. It will be replaced with The NBA Experience, which will feature tons of interactive elements, and a new restaurant. It will also be a huge piece of the all new Disney Springs transformation, and the latest in major overhauls happening at Walt Disney World. In fact, much of Walt Disney World will change within the next few years, as the entire resort will strive to keep up with the ever growing, family vacation, and stiff competition from other parks like Universal Orlando. 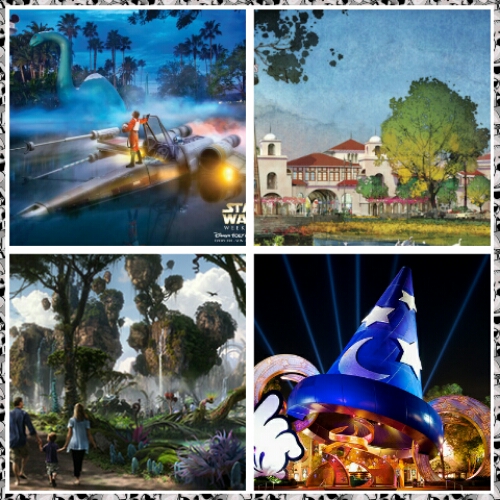 Disney is undergoing some huge changes at most of it’s parks, as well as many of the surrounding hotels, and even the Downtown Disney district. This means a ton of closures, rehabs and tear downs. Disney is about to change things at the park in a big way, with a huge focus on getting guests to stay even longer, and spend more.

So what is happening? We’ll take a run down of each area, and go over the different rumors happening.

So what exactly is happening at Hollywood Studios? How about a complete and total renaissance. The park is going to get an upgrade that goes anywhere from $1 billion to $3 billion, depending on who you ask. The time frame for the completion of the park is said to be around ten years, but we’ve heard a much tighter schedule.

Here’s what’s closed, and what is rumored to be closing:

Disney’s Hollywood Studios has pretty much been reduced to less than a half day park, and it’s only going to get worse. So what is Disney planning? The park will undergo a huge rebranding, taking away the Hollywood Studios moniker, and getting an all new name. The new park will take several years to redo, but the biggest thing won’t be the name change but the complete change in theme. It will go from a Hollywood Studio, where you see the animation and production process to a Hollywood Adventure, bringing guests on an adventure through the movies where you live it. Think a mix between Universal Studios Florida, and Disney’s California Adventure.

What will be coming to the new Disney Hollywood Adventure? We’ll most likely find out when the D23 Expo hits next month but here are some of the major rumors.

A few weeks ago, Iger himself, along with several other members of the board were onsite touring the area, and going through what is set to happen. The project has apparently gone from the planning stage to the construction stage, so expect to see a lot of movement happening after D23.

Animal Kingdom is undergoing one of the largest expansions to date. It has closed down several smaller areas, in preparation for Avatar Land. The new land went from being largely panned, as it was just going to include a ride and a gift shop, to a very immersive new experience. Apparently fans can thank Harry Potter and Universal for that. The new area will feature not only a state of the art new attraction, but a walkthrough area full of light up plants and walkways from the film, as well as an all new boat ride, and a night time show, similar to World of Color at Disney’s California Adventure. All of this is expected to take over in 2017.

Epcot is kind of the bastard child of Walt Disney World. It started out as an amazing place of the future, where guests could travel to places all over the world, without leaving Central Florida. Over the years, it’s kind of been forgotten, but all that is going to change.

Downtown Disney
As many know, Downtown Disney is transforming into Disney Springs. The huge transformation has already seen a shift from many of the old restaurants and shops to tins of new eateries and experiences.  Starbucks has a massive new presence, along with the huge bowling alley, Splittsville, and several new restaurants such as The Boathouse. There are several huge new restaurants still one the horizon, with Miyamato’s, The Edison, and an Indiana Jones themed bar.

Of course, there’s also the closure of Disney Quest, the indoor video game based theme park. It was the flagship attraction in what was hoped to be a huge chain of attractions. After the lukewarm response to Orlando’s DisneyQuest, and the closure of the Chicago DisneyQuest, the plug was pulled on the chain. DisneyQuest has received very little updates over the years, and the attractions and games are all fairly dated.

The all new NBA Experience will replace the attraction, and will not only feature a new restaurant, but also tons of new interactive experiences. Whether or not it will be a hit with families remains to be seen, but NBA City at neighboring Universal Orlando wasn’t exactly a huge destination. Still, despite the crying out from Disney fans, the NBA is one of the most popular sports leagues in the world.

Disney recently finished up work on the Polynesian Village Resort, which it added all new Disney Vacation Club Villas and Studio Suites. It also redid the pool, and several restaurant options, including the all new Trader Sams. The next hotel to get that treatment will be the Wilderness Lodge.

This is only the beginning. Several of the other Disney Resorts will allegedly get huge upgrades, with the focus being on keeping families in the resorts longer, and adding on to their vacation. It’s actually always been the goal of Disney, but now they seem to be wanting to change the resort experience completely.  We’ll see if the resorts end up pricing themselves out of most budgets with these new rooms and changes. The brand new Bungalows at the Polynesian are upwards of $2000 dollars a night, leaving many guests searching for cheaper rooms.

Disney is currently in the middle of a huge transition period. One theme park is pretty much going to be gutted, while the Downtown Disney area is nothing but construction walls. Resorts will see a huge change as well. While this time isn’t exactly fun, it’s going to be very interesting to see what exactly ends up being just a rumor, and what ends up actually coming to fruition. One thing is for certain, Disney is looking to squash the competition with big name attractions, and huge new options.