Halloween Horror Nights 25 is promising to be one of the largest collections of freaks, ghouls, ghosts, and maniacs that have ever been released…and that’s just the annual passholders. HHN 25 is kicking off in to high gear with some major teases, and it’s leading up to something, but what? We take a look at the latest “Scares” being released from Halloween Horror Nights Orlando. 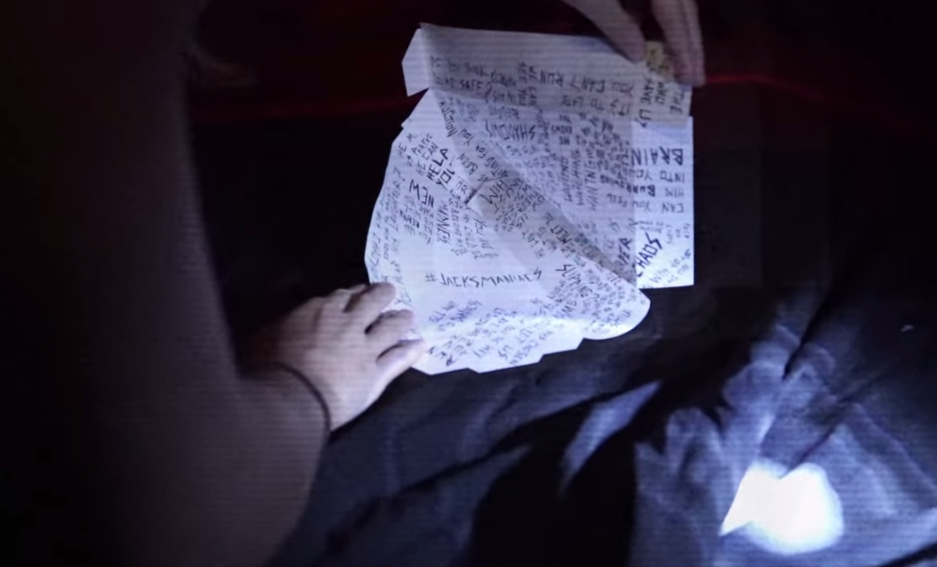 The first “scare” takes us behind Universal Orlando, where some over zealous fans are “sneaking in” to a soundstage. They really don’t get to see anything except a popcorn box, with all kinds of seemingly random letters scrawled all over it. The ramblings do seem to contain clues to the houses, but it’s kind of hard to make out much. We can make out #JacksManiacs, which has been a hashtag for the event for a few months now.

Of course the group encounters a bad ending, but what has ended their adventures so quickly? We can only imagine that it has something to do with the ghosts of HHN Past.
There will be a new “scare” every week until August 25th, when we suspect that we’ll get a major reveal. Will we get more house reveals until then? It’s not looking very likely, but we could see at least one more.

It’s obvious that Universal is definitely pushing their huge new social media initiative for this year’s HHN, which was fun last year…even if it lacked the brain stomping puzzles of the past years games. Still, it was definitely a great add on to the event, and lots of fun.

Update
The second of four scares has come on line, and like a horror movie, things go from bad to worse.

So Jack is now calling people as he stalks them. Same old Jack.
Though nothing is really revealed, it’s building the tension for what is hopefully a full reveal very soon.
Halloween Horror Nights Orlando has been strangely quiet in the past few weeks, giving out virtually no clues about what’s coming, and making no announcements since The Walking Dead. Fingers crossed for some movement soon.
We’ll have to see what other clues we can find out about this year’s event as the “scares” come out to play.

Update
The third of four scares is now online, and it’s not looking good for our trespassers.

Okay, if this is meant to be a video scare tactic…The face? Really? BUT…if this is footage from an actual scare in a maze, then it looks pretty good. So, let’s hope it’s that one and not the first. We are 30 days out now, and we are still waiting for a full line up.

The fourth and final scare has been released.

There is still no word on the line up of houses or scare zones. Jack being back though is enough to out a smile on anyone’s face…no matter how bad it might hurt.
Stay tuned for more from Halloween Horror Nights, and be sure to get social with us on Facebook, and follow along with us on Twitter @BehindThrills for the latest updates!

For more scares, and to purchase tickets, visit the official website by clicking here!