California Coastal Commission bans breeding at SeaWorld San Diego-What’s next for the park?

On Thursday, the California Coastal Commission listened to over eight hours of testimony from protesters on both sides of the SeaWorld debate. The list of speakers included experts, activists, and movie stars. The debate was over the expansion of the SeaWorld San Diego’s Orca tanks, that would take the tanks from around 4 million gallons, to a huge 10 million gallon new environment. In the end, it was a loss for SeaWorld, as the company was granted permission to build the tanks, but in doing so would accept a ban on breeding the whales, and limit the whales coming in and going out of the park. The move would essentially force the current family of 11 whales at the park into extinction, and would end the most popular attraction in the San Diego park’s line up. Of course, SeaWorld isn’t taking this lightly, and is exploring all of their options, but what exactly are those options, and what could the park do next? 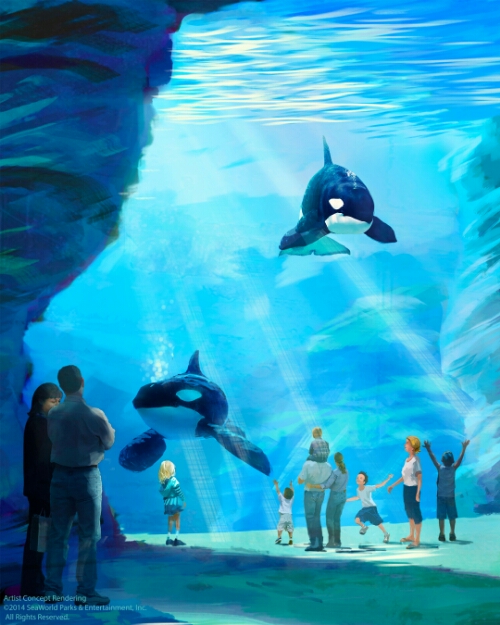 The ruling is strictly for the San Diego park, and would possibly not effect the ongoing project at the other two parks in San Antonio and Orlando, although it may spark more sentiment against the project, especially if the ruling goes unchallenged. As expected, animal activists, including PETA and makers of the Anti-SeaWorld film, Blackfish are calling this a victory, and seemingly expect the park to go along with the idea. Blackfish director, Gabriela Cowperthwaite. In a quote to other news agencies, Cowperthwaite said that “”SeaWorld can no longer say this is the work of activists and the animal rights community. It was a spanking coming from a much higher level.”

Was it the voice of the people, or was it an emotional, and pressured ruling coming from politicians and business owners feeling pressure from what they feel as a threat?

It’s something that has been exhibited before, as SeaWorld Orlando faced a flurry of cancellations from bands who were scheduled to play their park in 2014 after Blackfish supporters flooded online petitions, and Facebook pages urging bands, and threatening boycotts if the bands didn’t stop. It was a short lived protest, as SeaWorld replaced the line up with bigger, more prominent bands for the same dates.

With the Commission accepting that the tanks needed to be bigger, and still placing the limitations on the park, it shows that it was more emotional, than responsible.

In an article on the site SeaWorldCares the company says:

While we appreciate the opportunity to present the Blue World Project to the California Coastal Commission, and are pleased that the Commission recognizes the benefits of SeaWorld San Diego’s Blue World Project expansion, we are disappointed with the conditions they have placed on their approval. We are carefully reviewing and considering our options.

The Blue World Project will provide a deeper appreciation and understanding of killer whales for everyone who visits SeaWorld.

Again, what are those options? Let’s take a look.

The quickest, and obvious choice is for the park to take legal action against the Coastal Commission and the State of California. It could be a huge win for the park, but it will have to come quickly. There was a previous bill proposed- AB2140 that also would prevent Orcas from breeding, as well as performing in shows. It would not only effect whales at SeaWorld parks, but would have effectively banned the whales from doing anything but swimming around in tanks all day. The bill was put in review, which was essentially the death of the bill. However, there is new legislation being proposed that will put more pressure on state officials to ban the animals in the state altogether. There is also the incoming speaker of the state assembly, who was a firm supporter of the bill, and rode the animal rights activist train into office. If SeaWorld doesn’t resolve the issues before the new speaker takes office, it could all be jeopardized even further.

The legal rights of the Coastal Commission in the banning of breeding are shaky at best, and it should be able to be overturned fairly easily, but would that be a solution to the problem, and would the permission to build the tanks still be granted?

Another solution is to simply move the animals to other parks before the rulings take place. The park could, (as of now) legally take the animals to different parks in the country, or even put them in the care of parks in Asia which are opening very soon. That would leave the park with no major attraction, as the killer whales are the stars of the park, and the largest draw for the marine life park.

That would lead to another option.

Let’s say SeaWorld does remove the whales, then what? The company still has a long term lease for the land from the City of San Diego, and it is prime real estate, what would happen with the space? The company has a commitment to conservation and to the animals in Southern California. The park could be turned into a huge animal rescue, rehab and research center. It would be closed to the public, would generate very little revenue for the city and state, and would continue the SeaWorld legacy of rescue and rehabilitation that has lead to the rescue, rehab and release of over 23,000 animals.

The other option is for another member of the park chain to come in, and take over the space. The animals would be gone, but there would be rides, and a complete rebrand of the park. The park is pretty much limited to flat rides, and dark rides, so Busch Gardens would not be ideal. That chain has been concentrating on thrill rides and coasters of late. Sesame Place, however could be a great park to take over, and completely theme the park to the Sesame Street characters. There is a presence now, but the characters would take over the entire park. It would also be a huge addition for families, as Legoland California is the only other option in the area specifically for families.

Shut Down the Park

While closing the park would be an end of an era, it would not necessarily mean the end of SeaWorld. It would mean the end of SeaWorld in California, and would mean a huge blow to the Southern California economy, as the loss of revenue for San Diego, as well as the loss of jobs would be staggering. The park employs over 4,500 people, and is one of the biggest tax payers in San Diego.

The park could very well do nothing. If it does not build the tanks, then it would not have to agree to the terms set about by the Coastal Commission, and it would not have to fight. Would the fight truly end there, however? The state, and activists have created a very hostile economic climate for SeaWorld to operate in. Why would the park put more money and time into an area that has so many people wanting to shut them down, when there are plenty of other locations that would not only welcome the park, but also support it?

Let’s not forget the fact that, CEO Joel Manby has a history of shutting down under performing parks as well. When he was the CEO of Herschend Family Entertainment, he made the decision of shutting down Celebration City in Branson, MO after being opened less than 10 years earlier. The park was a financial burden to the company. While the situation may be a little different in San Diego, the choices are just as hard. Manby has a proven track record of cutting ties with a property that is dragging the company under, and investing that money elsewhere.

Theoretically the company could funnel the money and animals from San Diego, and make larger habitats in both Orlando, and San Antonio. San Antonio is specifically a great area for redevelopment of the brand, as the large property area, loyal customer base, and the ever growing population of the city makes it ripe for a massive restructuring. The area could even support a huge on-site resort, something that both San Diego and Orlando do not have the space for.

Keep in mind, that none of these options are being discussed (that we know of) and that this is pure speculation on the direction of the park. We honestly hope that SeaWorld and the California Coastal Commission, as well as the state of California can come to a better agreement, and the park thrives in Southern California. So much is at stake, not for just the animals, but for the people who care for them, and work around them as well.

While the loss of the first SeaWorld park in the world would be a huge blow to the company, at first, it would mark a new beginning and direction for the company as a whole. There will be a reveal about the direction of the company in November, and it would be silly to think that the recent ruling will not play a role in that direction that the chain will take.