Say it ain’t so! Toy Story Mania is closing at Walt Disney World’s Hollywood Studios…for one day. The news came across this weekend that to finish up the huge expansion of the ride, it will need to close for a day to get things just right. This comes right before the busy Spring Break season, and in a time that the extra capacity is much needed on the ride that perennially has excruciatingly long wait times. 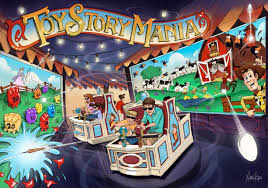 Toy Story Midway Mania is one of those rides that we’ve only been on once. It’s a great ride, but the wait is always over 90 minutes, with FastPass tickets gone within minutes of the park opening. The ride is so popular that the park is adding a third track to attraction, in hopes that it will make the lines a bit shorter.

The park also recently announced that they will be getting an all new Star Wars stage show, and fireworks spectacular later this year, which will make for some really big crowds.

TAG2016 Attractions Disney's Hollywood Studios Toy Story Mania Walt Disney World
Previous PostShow your ears! Disney will donate a million dollars to Make a Wish if you show your ears! Next PostValravn isn't the only big change to Cedar Point in 2016