Eli Roth knows horror. Not only has he previously teamed up with John Murdy for Horror Nights for the super popular Hostel mazes in the past, but he opened his own horror attraction ‘Goretorium’ in Vegas a few years back.  It looks like he’s back in action on the Hollywood backlot as Murdy and crew have teamed up with him again to bring you Terror Tram, or the full name, ‘Eli Roth Presents Terror Tram’

“Eli Roth Presents Terror Tram” will expose guests to the fabled legacy of serial killer clown “Hollywood Harry,” the story of a former jovial celebrity clown turn depraved murderer, and the minefield of carnage he left behind.

“I’m thrilled to be part of ‘Halloween Horror Nights’ again,” said Eli Roth. “We wanted to completely fabricate an original story that brings together our absolute freakiest, scariest most disturbing ideas.  The ‘Halloween Horror Nights’ team is the best in the business. Their production and execution is unmatched and I know this ‘Terror Tram’ experience will blow away all expectations, and haunt guests for the rest of their lives.  ‘Halloween Horror Nights is the must-see event for any horror movie fan—it’s like the Super Bowl for scary movies, and is my favorite event of the year.” 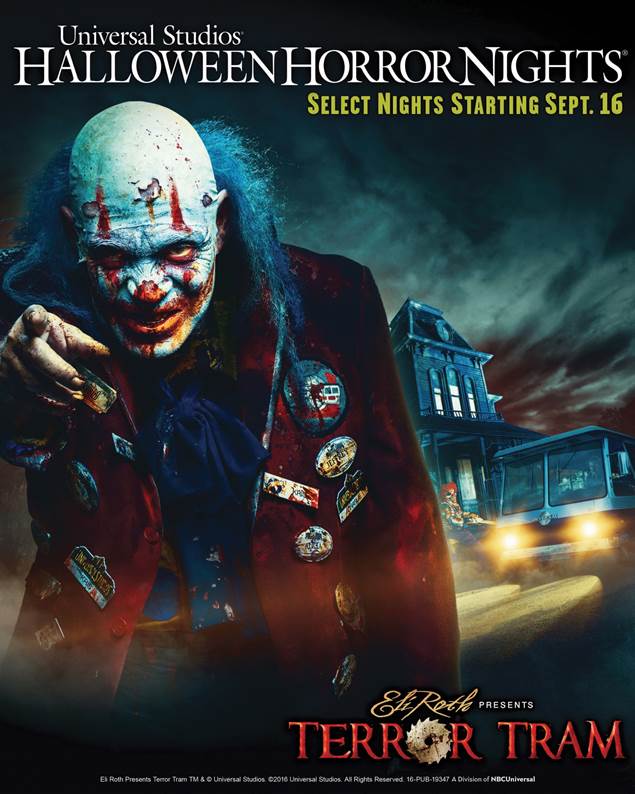 The all-new “Terror Tram” experience will tell the sordid tale of former Angeleno resident Harold Kappowitz whose alter ego “Koodles the Clown” went from cheerful circus performer, to the lovable star of his own children’s network television show…before he was overcome by his genuine “killer instincts.”

By the 1990s, hard knocks took a deadly toll on Kappowitz, and the onetime endearing clown found himself exiled by the very Hollywood entertainment community that once adored him. With an all-consuming anger and hatred, Kappowitz—a now crazed and disheveled recluse—took refuge from society by hiding out at Universal Studios, emerging as notorious serial killer clown, “Hollywood Harry.”  Recurring murders began to dominate the studio, as “Hollywood Harry” drew strength from recruiting other outcast former clowns who, together, took revenge on Studio Tour guides and visitors alike, ceremoniously killing them, and leaving behind a deadly trail of terror.

“The goal of ‘Halloween Horror Nights’ is to create the most intense, most memorable and ultimately, the most terrifying experiences for our guests,” said John Murdy, Creative Director at Universal Studios Hollywood and Executive Producer of “Halloween Horror Nights.” “And there is no better partner than Eli Roth to deliver unabashed horror that’s so real you can feel it. We were fortunate to work with Eli years ago on his original ‘Hostel’ themed maze, so we can only imagine the terror that he’s envisioning.”

Every year they roll out something new for Terror Tram though the past few years have been dedicated to The Purge and Walking Dead on their signature nighttime horror tour through the movie studio. Clowns are evil. They want your souls. So who better than Eli Roth and Halloween Horror Nights to bring you evil demented Clowns to Terror Tram? This also marks the first time Hollywood has used an original theme for Terror Tram since the event returned and shared ‘The Director’ with Horror Nights Orlando has he took over terror tram for one of the more memorable years.  This is the 2nd time in recent year HHN Hollywood has had a celebrity give their take on clown carnage. Two years ago HHN Hollywood teamed up with guitar legend SLASH for his vision of twisted clowns in a unique 3D maze, you can check out the entire maze below!

This caps off one of the best line-ups Halloween Horror Nights Hollywood has ever seen since its return in 2006. This year you’ll find American Horror Story, Freddy vs Jason, The Exorcist, Halloween 2, Texas Chainsaw Massacre, Krampus, The Walking Dead and mega-scare zone based on The Purge Election Year and now Terror Tram with Eli Roth. WOW.