Halloween Horror Nights Hollywood WOWS with an All-Star Line Up of Horror Icons!

Michael Meyers, Freddy Krueger, Jason Vorhees, Leatherface, chances are your favorite horror icon can be found at Halloween Horror Nights Hollywood. This year marks the 10th Anniversary of the event’s annual return to Universal Studios Hollywood, so they decided to not just go big, but go so big that they might not even be able to top themselves after this 2016 season is through. This of course can be seen as both good and bad in the long run as crowds were at record levels opening weekend, selling out both nights hours before the event had started each day, it was quite clear that Universal were not expecting the turnout, more on that on in a different article. In this article we’ll take a look at each of the brand new offerings, and offer our quick thoughts, what works, what scares, and what you should not miss this year. 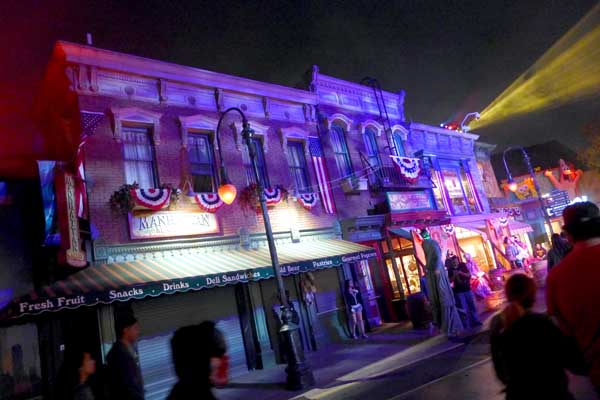 Starting off with the scare-zones this year. Guests were presented with a unique offering never seen before. For the first time every scare zone in the park, both upper lot and backlot shared the same theme based on The Purge: Election Year. This also marks the 3rd year in a row that The Purge has been used as the main scare zone. Entering the park you’re met with essentially the same set up as before, but this year did feel much higher energy, the talent was really on their A-game opening night. The front of the park felt refreshed and I enjoyed watching most of the scareactors doing their thing from the sidelines. 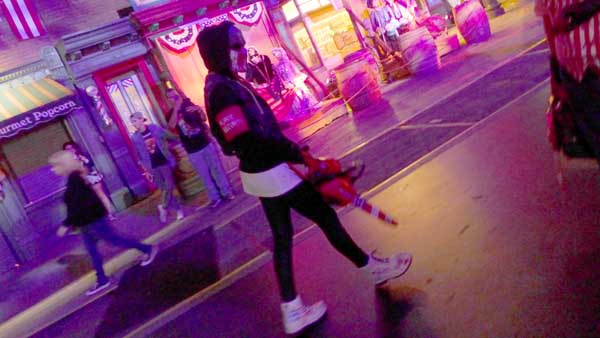 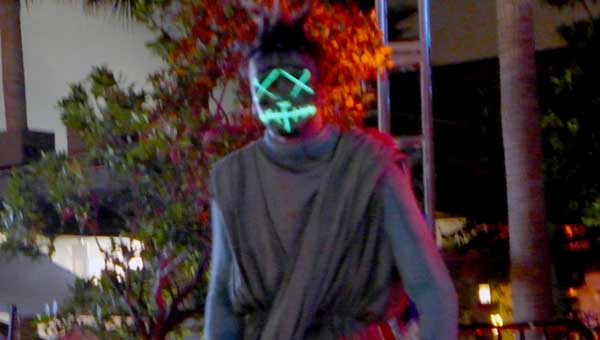 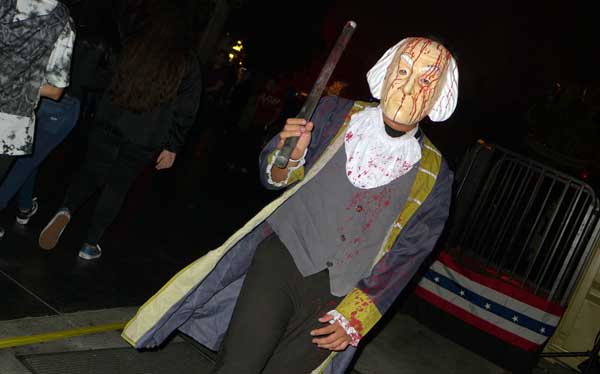 Where things get different is a new experience called The Purge: Gauntlet of Fear, and it’s one of those things that could only be pulled off in Hollywood. It’s a large scare zone, similar to an outdoor large scale maze. One way in, one way out with props (mostly reused from previous HHN offerings) and themed to the chaotic world of The Purge. It’s definitely a fresh take on the a scare zone and definitely worth checking out at least once this season if you plan on going multiple times. 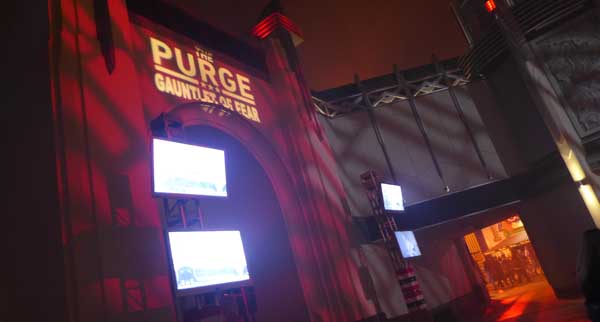 Enter the Gauntlet of Fear below!

That leads us to the two zones which take place during the half mile walk from the theme park to the studio’s backlot where the Krampus, American Horror Story and Freddy vs. Jason mazes are location. Both are equally high energy but at the same time nothing worth writing home about. As usual the talent in these zones (one is a large LED pulsing, dubstep drowning tunnel) are very good, loving their roles and constantly on the prowl. The scarezone on the back lot follows the same formula as previous years. You enter the metro sets with dead bodies, props and lots of characters from each Purge movie on the prowl. 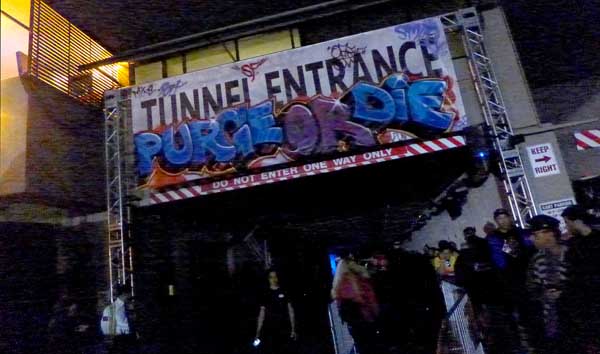 Much like the natural progression of the event, the scare zones lead us to the mazes which we’ll talk about next. Each maze this year is very solid, generally there are 1-2 mazes during HHN that will not click with me, that’s not the case this year. We’ll go into deeper details for each maze in separate articles, but we’ll try to give the general first reaction in this article. If you just can’t wait, be sure to check out our YouTube page HERE with highlights from each and every maze at HHN Hollywood 2016. 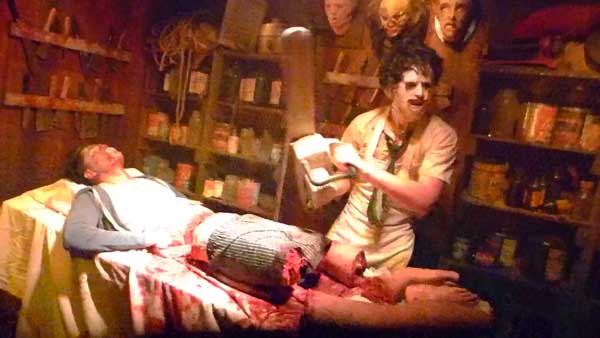 Starting at the front of the park, we started our night at Texas Chainsaw Massacre, which is a brand new maze location located in the Water World queue. Next to AHS this is the 2nd longest maze of the night as well. Since Hollywood has done both versions, classic and reboot of TSM, this maze takes a lot of liberties and is completely original setting itself between the first and 2nd movies. This maze had a bit more of a cartoony, over-the-top feeling to it, similar to House of 1000 Corpses in many ways. The first character you find in the maze is Drayton Sawyer, leatherface’s brother and he faithfully welcomes you to the slaughter house. The house is high on intensity as every corner has a scare of some sort. It’s a gauntlet of leatherface and chop-top scareactors and one of the scarier more gruesome mazes this year. 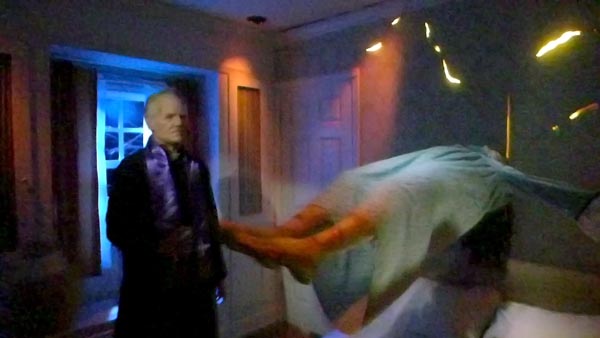 One of the most requested movies of all time has come to Horror Nights at long last. The Exorcist stands as a pinnacle of horror, terrifying generations. That terror now comes to life at Universal Studios. The maze sits backstage nestled adjacent to the Revenge of the Mummy showbuilding and features key moments from the film. The best scene in my opinion takes place at the beginning of the maze where you see Reagan doing her chilling spider-walk down the staircase in a shot by shot replica of the scene from the movie. The maze is scary in a way very much so different than TCM. Though this house does have plenty of boo scares and practical scares, this is also mentally scary. If the concept of posessions and demons give you the willies, this maze will do a number to your psyche. 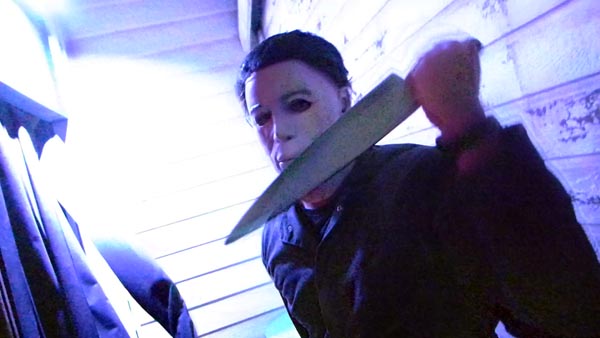 One of my favorites of the night, this felt like a scene for scene retelling of the cult classic Halloween 2, and that’s basically what it was. Though the stand out moment took place at the end of the maze where you enter into Michael Meyers’ “mind” so to speak. Loved every second of the maze, another must do for classic horror fans, plain and simple. Much better than last year’s as Halloween maze based on the first film. 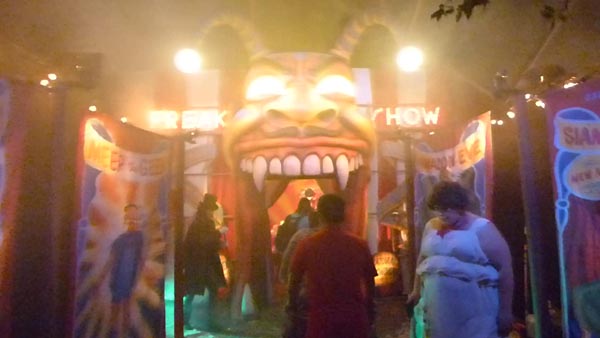 Another massilvy requested property, American Horror Story finally comes to HHN with a best-of type maze featuring Seasons 1, 4 and 5 (anyone else smell, 2-3 and 6 next year?) based on Murder House, Freak Show and Hotel. This maze occupies the spot that From Dusk Till Dawn filled a few years ago and tram loading and unloading just last year. It’s also the largest maze at the event fit inside of the Universal’s JUMBO tents, that is a few thousand square feet larger than the standard maze tents. This maze is definitely not the scariest in the park, but more so visually stunning and detailed. If I had one suggestion, it’s that I wish the Freakshow segment was just a big longer and had more characters from the show done with scare-actors. If you’re not a fan of the show, this one is definitely passable, thus saving you a 3 hour wait. But if you are a die-hard fan, then you shouldn’t miss this! 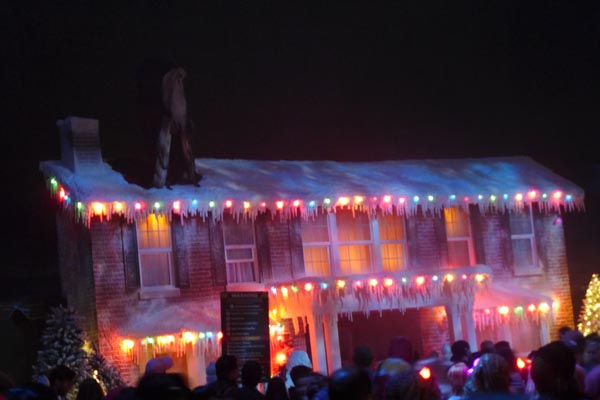 We love Krampus, you need to see Krampus. If the sort of twisted, scary-christmas type atmospheres are your thing, then you’re going to love the hell out of this maze. From the moment you enter the queue you’re surrounded by holiday music and given the backstory of Krampus. Not to mention the facade is probably one of the best ever at HHN! Highly recommended that you watch the movie before going through however. This maze is definitely the goofiest house at the event with demented Gingerbread men, maniac toys, and so much more good stuff. 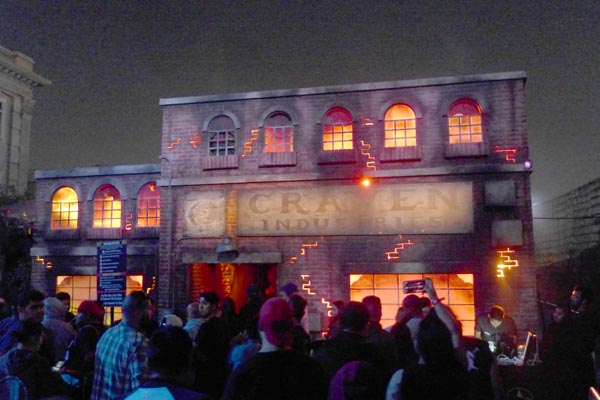 Any other year this maze would have been the tent-pole maze of the event. But with such a hard-hitting line-up this year, Freddy vs. Jason gets sort of washed out a bit. It’s a fantastic maze with a great juxtaposition between the worlds of Freddy and Jason before they finally meet. More than enough to make the horror nerd inside of me geek out a lot.

That does it for this look at the mazes. Terror Tram is still Terror Tram (seperate article coming soon talking about Eli Roth’s work) and The Walking Dead attraction is the same, with more talent (video coming soon). This year is SUCH a good year for Horror Nights fans. Hopefully Universal can find a way to figure the crowd flow issues and i’ll start looking forward.