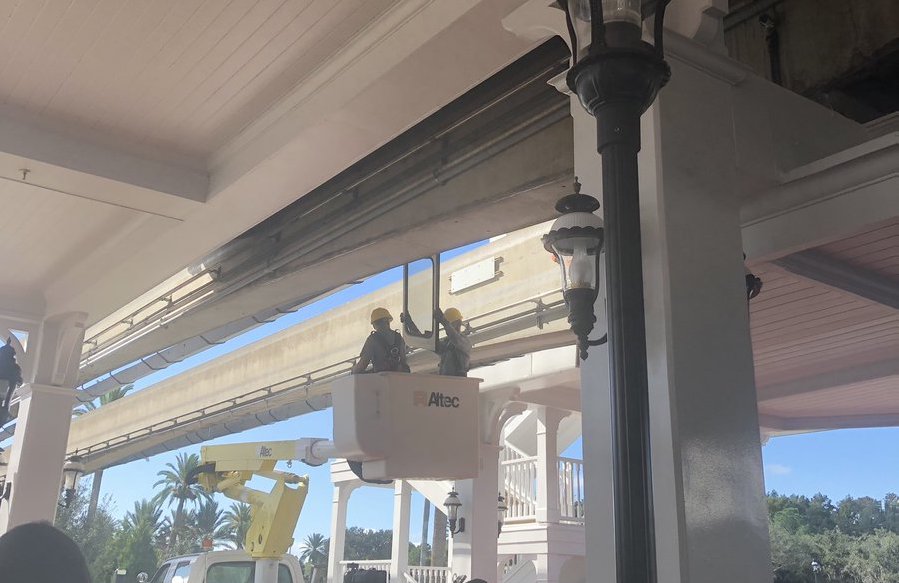 On Tuesday morning, crews were seen working on the “Lime Monorail” at Grand Floridian Resort, after the doors fell off of it. While that sounds bad (and it is), it’s not as bad as you think. The doors fell off, apparently after a person in a motorized scooter backed into them too hard.

The story was on Twitter, and offered a little clarity.

It’s not the first time that the aging Walt Disney World Monorail has had issues in the past few years. A few years back, a piece from the Epcot line fell off and narrowly missed striking a guest walking under it. A year or so ago, the door on the same Epcot line came open, without warning while the train was still moving. The park has since put up warning signs on the monorails that warn guests not to lean on the doors.

The monorail has broken down, and stalled out several times as well. While it’s one of the best known transportation systems at Walt Disney World, it is aging and not holding up well as it does so. A Replacement monorail system is allegedly on the way, but at this point it’s still likely years away.

While the incident isn’t the fault of the monorail directly, it did snarl up operations on both the Express Monorail and the Resort line for hours, making for hectic lines to get into the Magic Kingdom.

Currently Disney is working on a new “Skyway” which will connect several hotels and parks. The parks have also increased their “Minnie Van” line, to include just about every resort hotel and theme park. That, however, doesn’t fix the issues with getting guests to and from the main hub at Magic Kingdom and the Ticket and Transportation Center. So far, the park has not publicly issued a statement about the monorail.

More as we know it.