A banana colored carpet was rolled out for Gru and the Minions at Universal Studios Hollywood for the unveiling of their all new ride, and kids area based on the hit Despicable Me film series. Both Despicable Me:Minion Mayhem and Super Silly Fun Land opened to the public on Saturday, marking the ongoing effort to expand the Southern California Park and make it more than a one day destination. Friday we joined other members of the media on the yellow carpet to interview the filmmakers, film stars and check out the huge grand opening celebration. 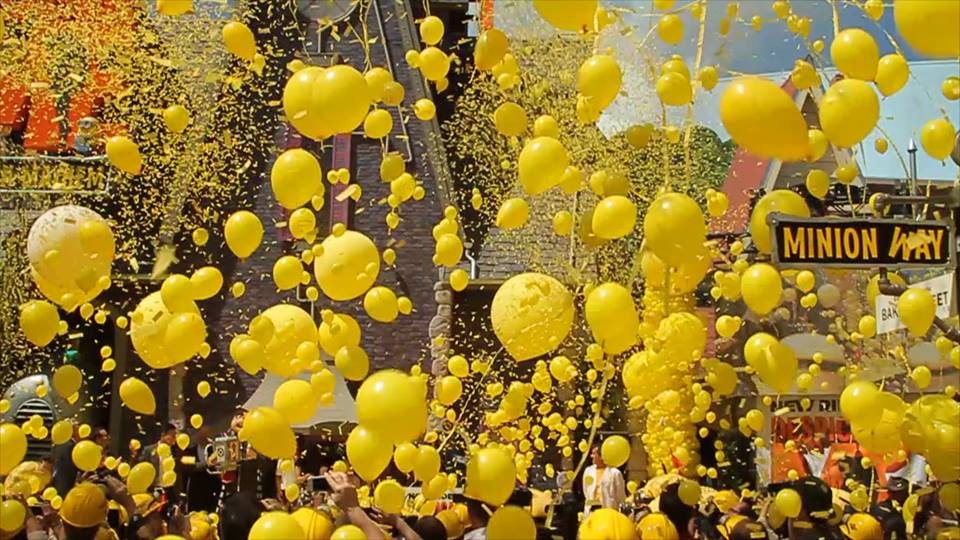 Mario Lopez hosted the event, while Gru and stars of the film-Miranda Cosgrove, Dana Gaier, and Elsie Fisher walked the yellow carpet along with Universal Executives for the all new kids attraction. As Gru pushed the big red button, a huge flurry of yellow balloons, streamers and confetti drenched the crowd.

The grand opening was attended by not only Universal executives, but also the filmmakers, and the mayor of Los Angeles. The ride and area is the first official “kids ride” in the park. It’s the third major attraction at Universal Studios Hollywood, and part of the current five year plan, with a Fast&Furious attraction and Springfield expansion coming in 2015, and Wizarding World of Harry Potter in 2016. 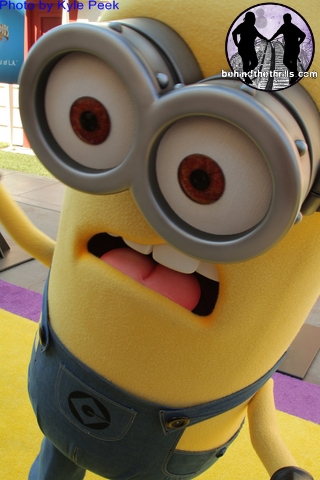 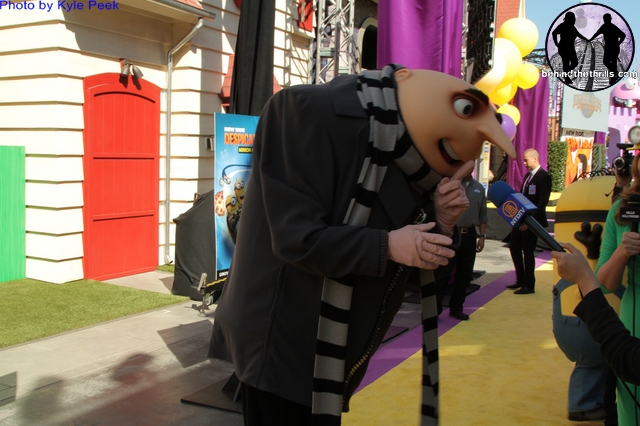 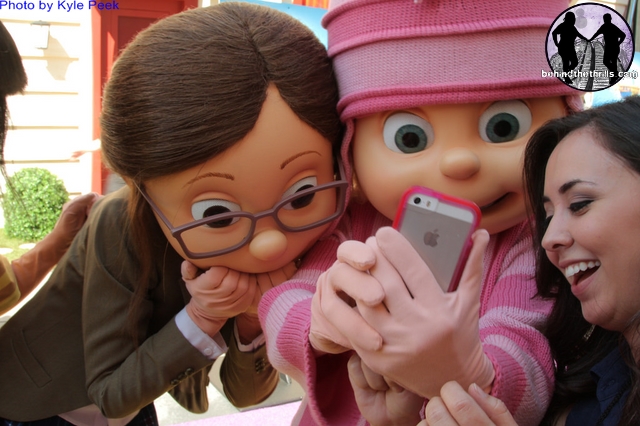 The characters from the film also walked the yellow carpet and posed for questions, pictures and even selfies. The Grand Opening ceremony also featured characters dancing to the Oscar nominated “Happy” by Pharrel Williams. Despicable Me currently has two films released in the franchise, with a third film in development as well as a spin off Minion film coming very soon.

The Despicable Me attraction is just one part of the new addition to the park. The other is the huge water play area-Super Silly Fun Land, which also made it’s debut with the grand opening. 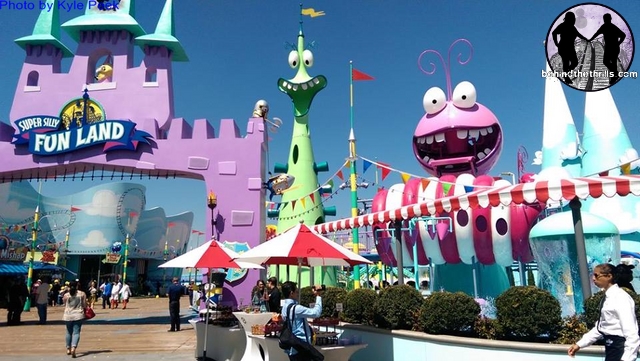 The area is taken directly out of the first film, and recreates portions of the amusement park that Gru and the girls visit together. The area is full of slides, water play and a huge dumping bucket. 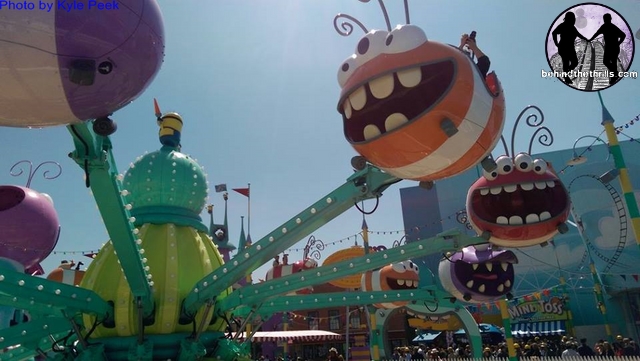 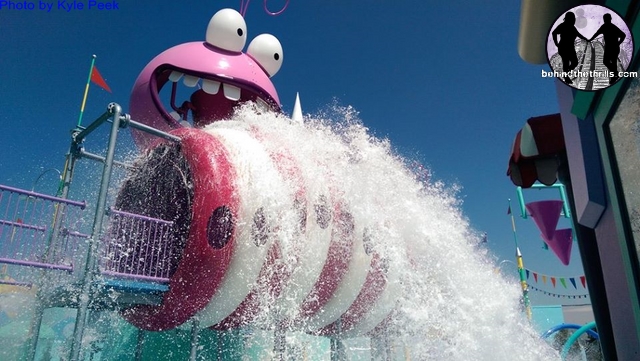 The area also features an all new flat ride, which is geared for kids of all ages. It gives a great birds eye view of Super Silly Fun Land, as well as a huge look at the rest of the park. It’s a gentle ride, much in the vein of Dumbo at Disneyland, and is themed to cute little bugs.

Video-Go for a ride on the Silly Swirly at Super Silly Fun Land! 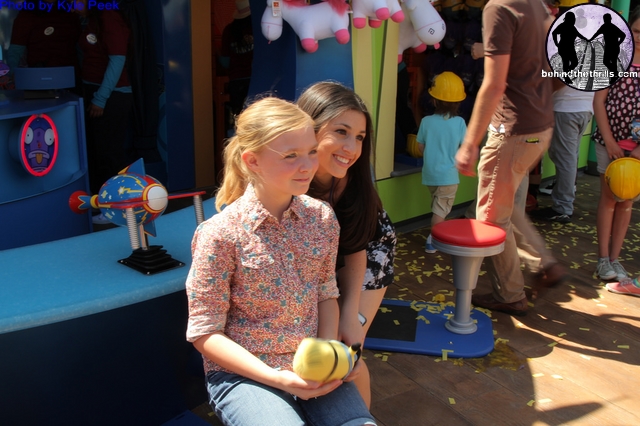 The other major attraction of the area is of course the carnival games. One key is Agnes’ love of Unicorns, and finding one that is “So fluffy that I think I’m gonna die”. You can compete in the actual Space Killer game that Gru blows up to win the unicorn. Of course, you won’t have to blow it up to get it “KNOCKED OVER!”. The films stars even took to the game to try and win their own Fluffy Unicorn.
Video-Watch the films stars compete in Space Killer to win a unicorn-IT’S SO FLUFFY!

Super Silly Fun Land is now open at Universal Studios Hollywood. It is part of Despicable Me:Minion Mayhem. The ride is a 3D simulator attraction, great for all ages. In it, guests not only walk through the house and neighborhood, but also train to be a Minion. Do you have what it takes to be one of the proud, the millions…a minion? Check out our coverage of the attraction, and see the tasty treats in Gru’s Lab Cafe by clicking here!

Stay tuned as we bring you even more from Universal Studios Hollywood, and be sure to follow along with us on Twitter @BehindThrills for the latest updates!

For more information about Despicable Me and Super Silly Fun Land at Universal Studios Hollywood, visit the official website by clicking here!