Spring Break officially ends at the end of this week. It will then be safe to return to the beaches, the malls, and theme parks. Crowds of people will vacate many theme parks and things will be back to normal. In related news, if you wear your Halloween Horror Nights shirt to an Easter party, expect dirty looks. In even more related news, egg dye on the patio carpet will turn people into raving lunatics. Use plastic eggs instead. And now, for some theme park news. Shall we then?

This isn’t news, but something really cool for any Disney fans. A gentleman near where I live fabricates wrought iron into shapes and designs. He recently made a replica of Cinderella’s carriage out of a very old car frame. He is renting it out for use..no horses required 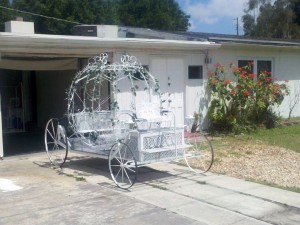 At Disneyland Paris a piece of rock fell off and hit several people while on Big Thunder Mountain Railroad. So it was a fake rock, but it still sent one person to the hospital and four others had to be checked out onsite for injuries. Read the whole story.

Other
Knoebels has had countless problems with Flying Turns. Going on the 5th year, the coaster has had untold problems. The latest problem is the cars are failing test runs and in some cases jackknifing. Not good. On top of that the next coaster, Black Diamond, the 3 story mine coaster is being pushed back to late summer as it’s having problems. Check out the full story to see quotes from hopeless nerds from ACE and of course Lance from Screamscape.

Cold rain couldn’t stop people from riding the all new Wooden Warrior at Quassy park Sunday. The all new coaster which features Timberliner trains was supposed to make it’s debut Saturday, but inclement weather pushed it to Sunday..when the weather was still bad. More here.

Zippin Pippin in Green Bay is having testing issues because it’s so damn cold! The weather in Green Bay won’t warm up long enough to get the coaster testing. What can we say, it’s Green Bay for a reason.

Windseeker at Cedar Point has an opening date. The 301 foot tall swing will make it’s debut at the point May 13th. The park opens May 14th. The first run is to benefit the American Red Cross.

Sea World San Diego is getting rid of plastic bags to coincide with the opening of it’s all new Turtle Reef attraction. The park will offer reusable bags, or paper bags to cut back on what it estimates to be about a million bags per year. A major cause of death and distress of Sea Turtles in the wild are plastic bags, and other garbage that finds it’s way into our oceans every year.

There is no ride of the day. Know why? Because I can’t remember what I’ve made the ROTD…so if you have any suggestions on a ROTD let me know.. I’ll gladly take them.