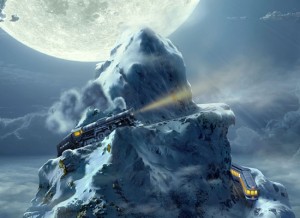 14 Days til Christmas-The Polar Express
My kids are old enough to scoff at Christmas traditions. My oldest especially rolls his eyes at the mere fact that I try to make him take time out and read a book to them like they were still kids. But he eventually gives in to the old man, and curls up as I read them the Polar Express. Everyone knows the movie with Tom Hanks, and the dead eyed children, and honestly despite the lack of souls in the motion capture performances, it’s a great holiday movie with a great message and a touching delivery.
Every kid grows up, and discovers that Santa isn’t real. That it’s mom and dad in the middle of the night bringing in presents. Santa’s existence is one of the 7 things that you forget on the way to becoming an adult. The book deals with specifically that thought, and how it can be avoided at the right moment.
We never know many of the names in the book, but what we do know is that the main child is on the verge. He wants to believe in Santa, but so many things tell him that the big guy isn’t real. One Christmas eve, as he’s lying in bed a train appears on his front lawn and whisks him on an adventure to the North Pole.
Even in the movie, that moment is the most magical of the entire movie, and I can never watch it without getting misty eyed.
httpvh://www.youtube.com/watch?v=ib3Hn188Jwc
It’s such a pivotal time in all of our lives when we have the decision to make. Do we forget all the wonders of childhood and charge full force into adulthood, or do we get aboard that train and go steaming full force with our fantasies firmly in hand, destined to never grow up? I run a theme park site, and write about a world of monsters, demons and heroes in a world where victory is had by thousands every ten minutes. What do you think I chose?
Polar Express has further thrust itself into our hearts by first teaming up with SeaWorld in Orlando to bring the Polar Express Experience. It features a yearly transformation of “Wild Arctic” into the North Pole, complete with hot chocolate, a ride on the Polar Express and of course SANTA! While the ride is nothing special, the whole experience is just short of amazing. You enter through the boys room, and watch as the movie comes to life. The smell of snow and pine fills the air as you board the train, and then you arrive in a corridor filled with huge presents and lights. The smell of hot chocolate embraces you and as you turn the corner you see a huge Christmas tree resting firmly against the ceiling. You then turn and there’s none other than Santa himself!
All amazing prospects that are brought to life.
So, when it comes to the big guy…all you have to decide is whether or not you believe.
Do you?