This Sunday, another episode of “Insane Coaster Wars” will air on the Travel Channel. Insane Coaster Wars features some of the nation’s most insane coasters. They might not be all that insane, but they are all geared toward thrill seekers. On last week’s episode, Apollo’s Chariot at Busch Gardens Williamsburg was the spotlight of the show. This week’s episode will air on Sunday, July 15th at 9pm ET. 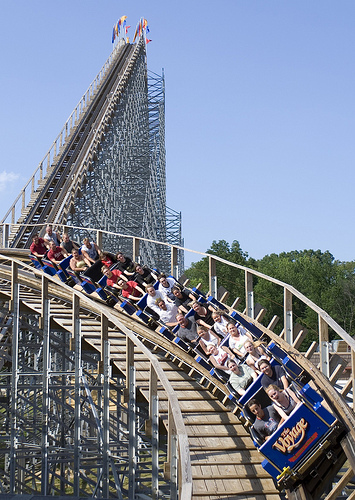 This week’s episode will feature Holiday World’s roller coaster, Voyage.Voyage has been voted as the number 1 wooden roller coaster in the world by Amusement Today’s “Golden Ticket Awards”. Voyage is 1.2 miles long (a total of 6,642′ feet of track) and reaches a top speed of 67 miles per hour. The ride offers more “air time” than any other wooden coaster in the world does. Voyage stands at a height of 163′ tall and features a 154′ drop at a 66 degree angle.

For more information about Holiday World, visit the official website.