It seemed like it would be next to impossible this year, but despite all the construction, Universal Orlando has pulled it off once again, and has opened Halloween Horror Nights 22 at Universal Orlando resort. Friday the event officially kicked off to the public, with tons of fog, scares and chainsaws to be had. This year the event features four houses based on intellectual properties, including The Walking Dead, Alice Cooper, Silent Hill and Penn&Teller. In fact, Penn&Teller were on hand to welcome everyone to the event, field some questions and  talk about all the love they have for Halloween Horror Nights. 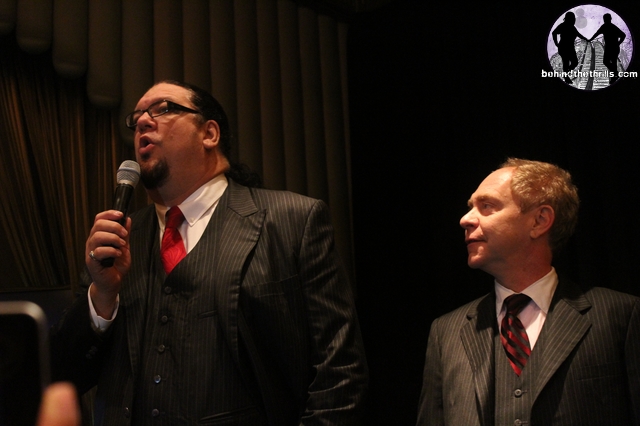 According to Jim Timon, Senior Vice President of Entertainment at Universal Orlando, the concept for Penn&Teller’s Newk’d Las Vegas started with the five coolest words in creative development “Wouldn’t be cool if…”

“What we love doing more than in anything in the business of creating really immersive experiences, is reaching out to incredibly cool creative people” said Timon “Penn and Teller came to us and we said Wouldn’t it be cool if…and they came up with this great concept.”

The house mixes the creative coolness of Penn Jillette and Teller with the one of a kind Universal Halloween fun. The result is a fat gooey baby that looks like Elvis and smells like the good parts of Las Vegs (okay, maybe not the good parts). Penn&Teller took the stage, and Penn explained himself how the entire process went down.

“The amazing thing is when you get an idea, and Universal says they can do it, they really can.” said Jillette in front of the media presentation on Friday “When we get an idea, and say we can do it, we usually fuck it up three times first and then struggle to bring it to fruition.”

Universal has a history of bringing great stories to life with Halloween Horror Nights, and Penn&Teller Newk’d Las Vegas is no exception. The house idea is somewhat clever as well, as it uses the location of the house to it’s advantage. Penn&Teller are famous magicians, or illusionists…or whatever you want to call it. The truth is that they are one of the best at screwing with your mind. One of those famous methods of mind screws is catching a bullet fired from a gun. For the house, they decided to step it up a bit and use a nuclear missile. Of course things go wrong, and Las Vegas is all but destroyed. What survives is a melted mutation that still strives to be Las Vegas, despite the fact of being blown off the earth. Universal uses huge tent structures to house the event, so Penn&Teller took that idea and ran with it. They put a tent over Las Vegas, and you get to walk through the remnants, in 3D no less. You don your radiation protective gear and walk through the town seeing all kinds of mutations from backstage at a Penn&Teller show, a wedding chapel with a bride and groom bonded together forever (literally) and of course a mutated showgirl.

“If you like breasts” Penn says of the special showgirl “more is always better.”

The duo appear several times in the house through projections and TV monitors stationed throughout the house, in fact Penn&Teller will make unannounced appearances in the house themselves when they have nights off from their own show at the Rio, consider yourself warned. According to the official Rio website  the group have the majority of the nights off in October, so the chances of catching them in the act is pretty high.