Let’s me just start this review of the all new Marvel film, Guardians of the Galaxy, by saying that if this movie would have come out in the 80’s, when a lot of us were kids it would have changed all of us. More on that later. Thanks to a special meet up by The Disney Parks Blog,  we were able to catch a special early screening of Guardians of the Galaxy. In a summer with very few thrills, and not a lot of surprises,  Guardians is a great way to end the summer movie season. It’s also very surprising in many ways. 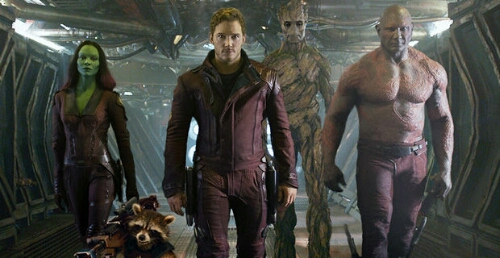 We will try to keep this as spoiler free as possible.  That is the best possible way to go into a movie like this. The film begins on earth with a young boy going through a great loss. That boy is then abducted by a ship, and we catch up with him 20 something years later.
The basic premise of the film is that an unlikely group of misfits and outcasts that must put aside differences to battle a greater evil. It’s a familiar formula,  with the same beginning and ending as we’ve seen before.  The difference here is, the journey to get from the beginning to the end is a hell of a lot more fun.

Chris Pratt plays Peter Quill (ya know, Star Lord man) who is the young antihero that the boy in the beg ends up being. His character is still very much that little kid on earth. He’s juvenile,  quick tempered and a womanizer. He’s quick to see a fight, but hates to see people hurt if it’s not a fair fight. A lot of comparisons to Han Solo can be made, and justifiably so. Zone Saldana plays Gamora, who is hot,  green and lethal. Bradley Cooper is Rocket…a genetically modified raccoon. Vin Diesel is his life partner, Groot. Groot says the same thing over and over…I Am Groot…yet every time he says it, there’s a different meaning. Bautista (yes the ex wrestler) plays Drag the Destroyer. He’s hell bent on revenge,  and very literal in everything he says.
The rest of the film is filled with a who’s who of supporting cast. Glenn Close, John C. Reily, and Benicio Del Toro to name a few.
The film is filled with tons of amazing effects, and a fast paced story. Once it gets going, the film just never stops to  let anyone catch up. That’s the only real problem,  it’s just too much damn fun at once. The film is unlike any other Marvel movie, in that it deals almost exclusively with space and Sci Fi.  While the other films in the Marvel Cinematic Universe take themselves very seriously,  Guardians doesn’t take itself serious at all. From Star Lord dancing his way on the scene, to Rocket swearing and blowing stuff up, it’s a pure romp. That’s not to say it’s a silly movie. It has moments that ground it to reality, and while those aren’t very many, they are played with so much heart that it threatens to bring tears at times.
The most important element is that the cast is genuinely having fun with the film. Rocket and Groot, personally made the movie for me. The way they play off of each other is reminiscent of a great comedy duo. Groot comes off very innocent,  eager to help when he can.  Rocket is foul mouthed and lives to blow shit up. Yes…I just said shit. And why not? Rocket says it a lot. In fact, this Marvel film has more minor swearing than any other Marvel film to date. It’s not gratuitous,  and it’s definitely played for laughs. After all, who doesn’t want to see a raccoon say shit?
Dave Bautista throws in a surprising performance as Drax. He’s very focused and intent on revenge, that he often misses the jokes and misinterprets the well meaning sayings. Bautista shows a range of motion as an actor that he really hasn’t done before. While it’s not Oscar winning material it’s very touching. Michael Rooker playing Yondu was almost a natural fit as the leader of a kind of redneck group of bounty hunters. This also the same guy who played Merle from Walking Dead with such a great flair, that it almost felt natural. The bad guy, Ronin the Accuser is kind of wasted, but he does his job at moving the story along. There is something after the credits,  but being we had a sneak preview…we didn’t get to see it.
Now, as I said, had this movie come out I  the 80’s, it would have changed how we see space adventure films. The movie had that same sense of adventure as the original Star Wars.  It also had as much fun as the Goonies and Indiana Jones film. It has just as much adult humor as Back to the Future. Those were all the elements that we fell in love with as kids. I found the inner kid in me coming out quite often as it did the first time watching any of my favorite 80’s films. It brought out my sense of adventure, my awe and wonder like no other movie in recent memory. While there will be the purists that will not like it, simply because of the variations from the comic, it’s a solid adaptation. But with every comic movie there’s going to be the bits that are cut out. Still, this is a refreshing new direction for the studio. It’s no surprise that the studio has already announced that a sequel will be coming in July of 2017. You’re welcome. 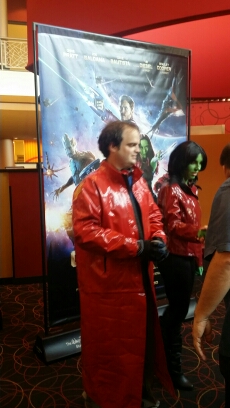 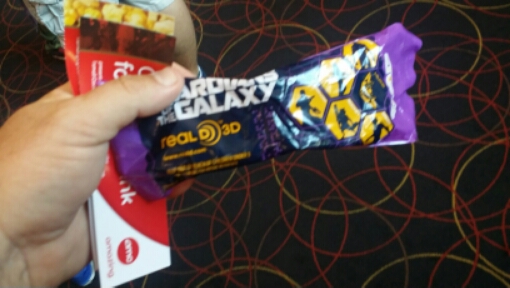 We were part of a Disney Parks Blog meet up. This was open to everyone who follows @DisneyParks on Twitter. This was not anything put on for the media. From time to time, the official Disney Parks Blog will host a contest via Twitter. Everything from meet ups in the parks, to special tours, to yes movie screenings. 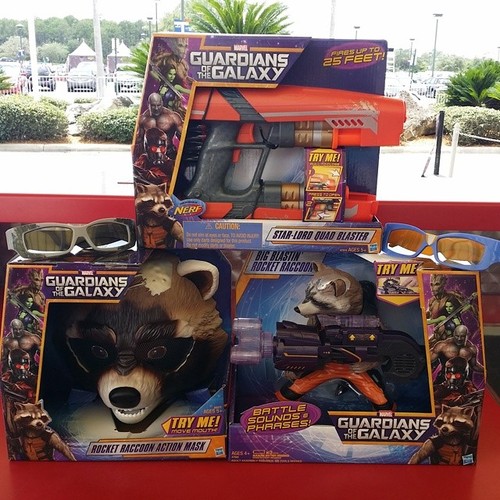 At the end of the film, each person was given a random Guardians of the Galaxy toy. It’s one of the many perks to being a fan, and reading up on the Disney Parks Blog daily. Besides the awesome giveaways and meet ups, Disney Parks Blog also has some of the most up to date Disney information, especially when it comes to new merchandise and happenings in many of the new parks.

We highly recommend following them, if you don’t already!

Guardians of the Galaxy opens this Friday, August 1st in theaters everywhere!