The all new Busch Gardens Tampa Food and Wine Festival will hit the park on weekends this spring. The all new festival will feature, naturally, different foods and wines from various parts of the world. It promises to be a huge event filled with a little something for everyone. Another huge aspect will be the music. On select dates, some of today’s hottest acts. While Busch Gardens hasn’t released the full musical line up, they have listed one the hottest hot a cappela groups as performers. 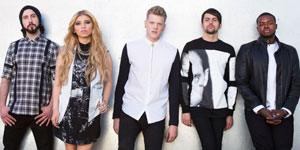 Pentatonix is a five member group from Arlington, Texas. The group first came to popularity by winning NBC’s show The Sing Off. Since then the group has released five albums, been nominated for Grammy Awards and has charted on Billboard.
Video-Pentatonix takes on Daft Punk

The group made an appearance at Busch Gardens Tampa in 2014 as part of their Summer Nights celebration. The band will return on March 22nd as part of the all new Food And Wine Festival. The event kicks off March 7th and runs weekends until April 26th.

Surprisingly, few other details are known about the Food and Wine Festival. We know it will have food…and wine. Rumors have suggested that it will also feature an array of topiary crafted specifically for the event, and it could also include cooking demonstrations as well as good stations based on different cultures in Africa.
The Busch Gardens Williamsburg Food and Wine festival features food from all over Europe. Since the Tampa park is themed to Africa, it’s logical to think it might feature flavors of that region.
Food and Wine Festival, as well as the concerts will be included with theme park admission, though the actual food and wine will be available for a fee.
Stay tuned for more from Busch Gardens, and be sure to get social with us on Facebook and follow along with us on Twitter @BehindThrills for the latest updates.

For more information about Food and Wine festival at Busch Gardens Tampa, including tickets, visit the official website by clicking here!