The Haunted Attraction industry is an industry that is less like a business, and more like a family. Everyone knows everyone, and you’re all working together for one common goal-to get the loudest screams. Haunted attractions may not seem like it, but the people that work them have huge hearts. Every year scores of haunts do food drives, blood drives and even accept money for charity. Now, as we approach the holiday that is all about love, one haunt is showing how big their heart is for one of their own, and it’s for a very dire situation. 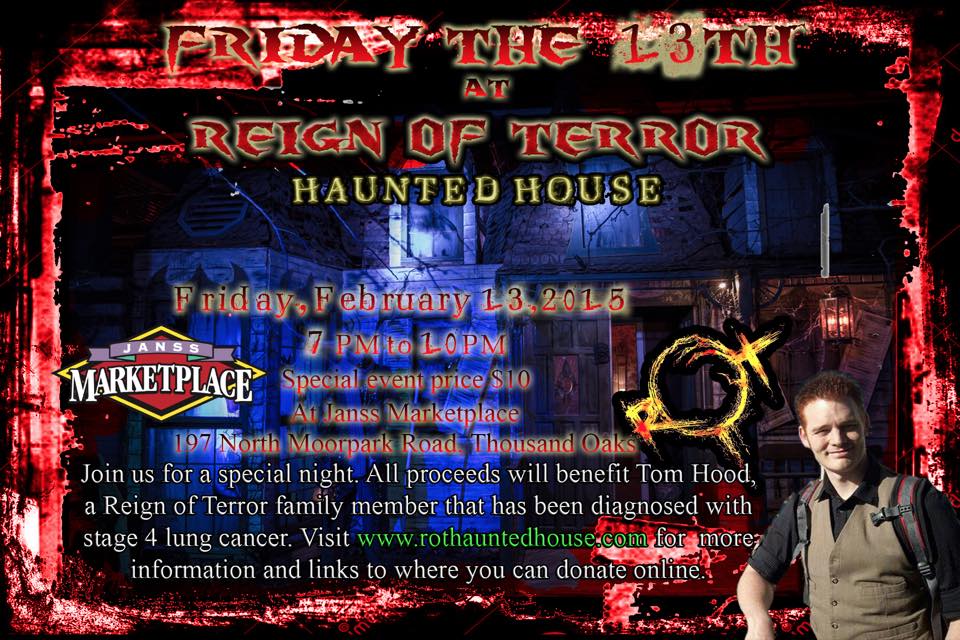 Friday the 13th Reign of Terror in Thousand Oaks California will be opening its’ doors to those looking for a winter scream. Why not, it’s one of the most unlucky days of the year, and it’s at a time when some people are starting to get the winter blues. Reign of Terror is continuously voted as one of the top haunts in the country as well as California, so really it’s a great place to get your scares on, but Friday the 13th, there’s even more of a reason to go.

Reign of Terror’s very own Tom Hood is a father of four girls who range in age from 5-8. He’s a great haunter, and loves what he does. Tom is not a smoker, yet he’s been diagnosed with stage four lung cancer. Let that sink in a minute.

Having known several people who have passed from various types of cancer, I can tell you how devastating the disease can be for not only the people who have it, but for the families that it leaves behind. The treatments are expensive, and even with insurance it will drain your bank accounts.

Reign of Terror is doing an amazing thing for Tom. They are donating every last penny from the opening on Friday the 13th to Tom and his family. Tom will not be there, as he’s in the hospital, fighting for his life. In addition, Janss Marketplace is helping to sponsor the event, and The Official Sunset Terrace Restaurant will be donating a portion of their proceeds to help Tom. The community has stepped up in a big way to help, which warms our black little hearts. If you’re in the area, stop by and see the haunt or grab a bite to eat, it will go a long way to helping someone who’s brought fear and joy to so many.

If you’re not in the area, you can still help.

Visit the official benefit site to donate online. It doesn’t have to be much, and every little bit helps.

Reign of Terror is doing an amazing thing by helping one of their own, which shows how close the haunt community really is.

Visit the official Reign of Terror website by clicking here to learn more.