Orlando Eye shuts down due to technical issue

The all new Orlando Eye, the new attraction at I-Drive 360 was shut down in Thursday afternoon due to a technical issue.  The official website made the alert around 1:30 p.m. According to several reports, this is the second such issue with the attraction since opening on May 4th. 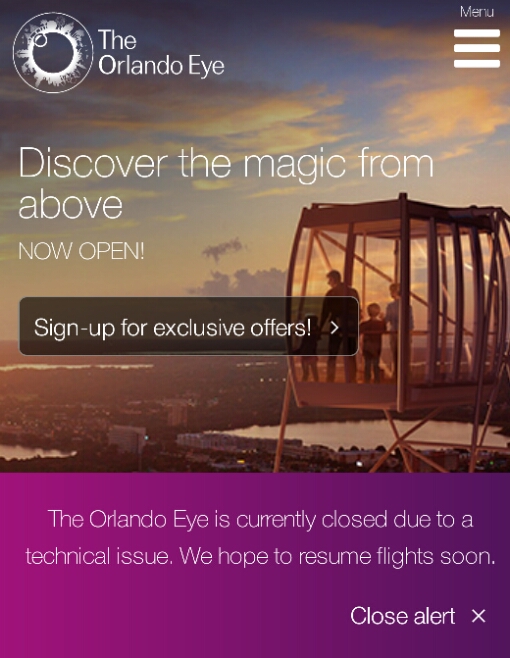 According to the official website, the attraction went down around 11:00 a.m. As of 9p.m. the website still listed the attraction as being down.  The Orlando Eye opened on May 4th as part of the huge new I-Drive 360. The observation wheel takes riders 400 feet above Orlando for a 360 degree view of theme parks, attractions and the surrounding area.

The attraction was shut down due to a “technical irregularity”. The ride did not have to be evacuated, though Orange County firefighters are prepared for the possibility.

The attraction is the centerpiece of the new I-Drive 360 complex, which is still opening several new restaurants and attractions in the coming months.

Video-Take flight on the Orlando Eye!

There was no indication of when the attraction would reopen to the public,  but minor glitches are part of the growing pains of many new attractions.  To see something going down in the first few months is not uncommon,  as many of the systems are still being learned, and adjusted.
Update
Friday night, the Orlando Eye opened after being down for most of the day.
The Eye released the following statement:

The Orlando Eye experienced a technical issue this week. We are now delighted to announce that the Eye has reopened! As with all of our attractions, the safety of our guests and employees is our top priority.

While any time the attraction is down, it’s not a good thing, it is still within the first month of operation, so it’s common for attractions to have minor hiccups.

Stay tuned for more from The Orlando Eye, and be sure to get social with us on Facebook and follow along with us onTwitter @BehindThrills for the latest updates!
For more information about the Orlando Eye,  including tickets,  visit the official website by clicking here!