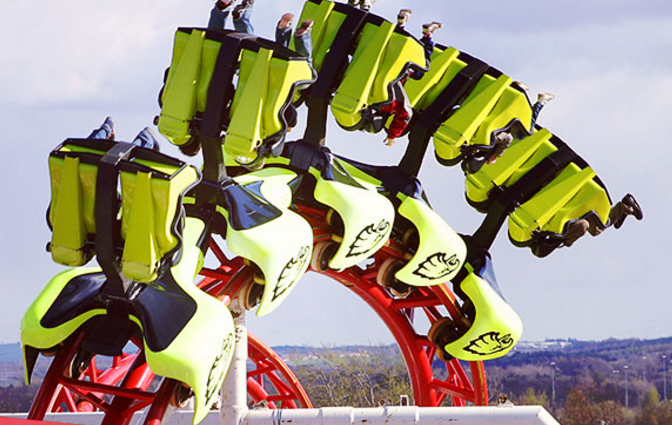 Officials are on the scene, and investigating. It is unclear exactly what has happened, and what caused the accident. Also it’s unclear exactly how many are injured. The Mirror reports that at least seven people who were on the train suffered injuries, but no word if anyone on the kid’s ride were hurt or even on it.

Reports say that the ride came off the rails in a turn, and fell 30 feet, bringing the entire train down. This is the first time in the parks’ history that a major accident of this nature has happened. The park has closed for the remainder of the day, and the park has released an official statement via their website:

DUE TO AN INCIDENT THE THEME PARK IS CLOSED.

A Spokesperson for M&D’s said: “a serious incident occurred at M&D’s today involving the tsunami rollercoaster. We have all emergency services on site to assist. The theme park is closed until further notice.”

The park will likely remain closed until investigators figure out what happened. Meanwhile, our thoughts and prayers go out to everyone involved.

Every time an accident occurs, the question comes up, “are coasters and amusement rides safe”. The resounding answer is yes, but always be cautious. There are an estimated 1.4 billion rides given in theme parks every year, and less than 1% of those rides end in any kind of injury. You are more likely to get bit by a shark, while driving a car through a lightning storm than to be injured in on an attraction (not really, but the chances are very low). The safety of the guests are the parks number one concern.

This particular coaster is a suspended coaster, built by Itlaian company, Pinfari. It previously traveled with touring carnivals and fairs in Argentina, Peru and Nicaragua, according to Roller Coaster Database.

Authorities are not reporting any deaths, but confirm that 11 people are being treated at area hospitals. People in the park rushed to try and help as riders were trapped on the coaster.

Guests in the park are starting to tweet out pictures from the incident:

My friend just uploaded this picture of one of the wheels that flew off the from the tsunami rollercoaster at M&d’s pic.twitter.com/Kc8U1fOjut

The park will remain closed until further notice. Many reports are saying there is a chance it may not open again. Accordimg.to police reports “nine gondolas became detached from the rails, and hit a structure before hitting the ground”. It does sound like the wheels did detach from one of the trains, which resulted in the accident.

If there is any bright side to the tragedy, it’s that there were no casualties, although many of the people involved were children. Some faced surgeries to save arms and legs.

Stay tuned for more on this story, and be sure to get social with us on Facebook and follow along with us on Twitter @BehindThrills for the latest updates!