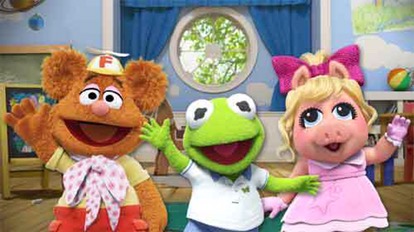 When your room looks kind of weird, and you wish you weren’t there. Just close your eyes and make believe and you can be anywhere! Now make believe that a new version of the hot animated show, Muppet Babies was coming back to television. You don’t have to pretend, because in 2018 Disney is bringing Muppet Babies back to television in an all new version for Disney Junior.

The new show will bring back favorites such as Kermit, Piggy, Fozzie and Animal. Yes, Nanny will be there too. The original show ran from 1984 until 1991. It featured great lessons, amazing music and lots of fun storylines involving Star Wars tributes, Indiana Jones montages and even Marvel references. That was mostly because Marvel Animation was one of the producers of the show. The show came as a spinoff from The Muppets Take Manhattan clip which featured the characters as babies.

The best part of the show was it’s ability to walk the line between kid show and adult humor. The show was definitely aimed at little ones, but because of the bits of humor and storylines, it appealed to a huge range of ages.

The new show will not be hand drawn, like the original. Instead it will be CGI, much in the fashion of Mickey Mouse Playhouse. Hopefully the new version of the show will keep its adult edge and stay relevant with modern movie and music references.

The Muppets have a really odd run lately. The first return to the big screen-The Muppets, was a massive hit. The second, Muppets Most Wanted was a flop. Their return to television last year was met with enthusiasm, but ultimately bad ratings lead to the show being revamped then cancelled. At Walt Disney World, the Muppets are stronger than ever. An all new pizza restaurant based around Rizzo the Rat is about to debut at Hollywood Studios. Meanwhile, an all new show featuring The Muppets made its debut earlier this year at Magic Kingdom. Hopefully the Muppets will continue to surge and Disney will continue to bring them to life in new ways.

The new show will air in 2018 on Disney Junior.  Now as Animal use to say…Go Bye bye!

TAGMuppet Babies offsite television Walt Disney World
Previous PostSorry Texas, Florida cares about our pools as much as you do  Next PostDollywood drops big plans for 2017