Bill and Ted’s Excellent Halloween Adventure is over. The final show was full of tears, surprises and much deserved applause. Thunderous applause. Much of the final show was spent with actors laughing at the audience, goofing off and choking back tears. It was the proper send off for the legendary show, which has been a part of Halloween Horror Nights since the second year of the event.

The End of an Era

The final night of the show was truly the end to an era. As such, the script was changed slightly and a lot of things were Ad-libbed as the show brought back fan favorite characters. The show started with a huge look back at the last 26 years of shows, and lasted through four songs! To say they left none of the highlights out is an understatement. Fans freaked out when a song making fun of Moana was followed up by the fan favorite Frozen song about friggin Sno-cones.

In the end Rufus came from the phone booth and took the Wyld Stallyons back to 1991, where they could fulfill their destinies and make this world a truly better place. And that’s the important part.

Now let’s clarify, Bill n Ted was not a family show. It was loud, crude and pretty inappropriate most of the time. Naturally my kids loved it.

My daughters 1st HHN ended in tears, but not before we warped her little 7 year old mind with Bill and Ted. While she skipped the next three years (she wouldn’t return until Lady Luck came calling), she would always be enthralled with Bill and Ted and we would even seek out some of the bootleg versions of the shows online. It’s something that brought us together, and sill brings us together to this day.

But the feeling of family doesn’t stop there.

The entire show was a huge family, from the performers to the creators. That tends to happen when you work on a show several times a night for almost two months out of the year. The show brought so many different people together, and so many different talents to one place that it was really awe inspiring to watch.

The talent started with the many writers that the show had over the years, working together with the entertainment staff to bring something together that would be within the budget of the show. The directors would take that vision and bring it life, together with the choreographers, sound team and special effects. This show just wasn’t about Bill and Ted alone, but the entire team. The team that closed the show, was pretty much the same team that has been there for about the past five years. That team included the amazing actors who played Bill and Ted, as well as the hilarious supporting cast. This year, Sean Spicer was played by an actress that has been capturing my heart since she first played Honey Boo Boo several years ago. If you watch the show long enough, you’ll start to recognize all the faces coming back for different roles.  I’m sorry I don’t know all the names, but I tended to try and respect everyone’s privacy as much as I could…without unleashing my inner fanboy.

It’s all this that brings that unbelievable feeling of family to life.

And after all that, here’s the point. Bill and Ted was a Halloween Show. It was a stupid, silly and sometimes vulgar Halloween show. We loved it, and we needed that in our lives. The world really needed that most years. It was more than a chance to hoot and holler, stomp, clap, and watch half naked people dance. It was a chance to reflect on the stupid shit that the year had brought us. Good or bad, it was a chance to look back and say either “hey, that was awesome, let’s keep doing that”, or “dear lord what are we doing?” and try and change it. It was a chance to buck the trends, or embrace the fads by laughing them into or out of existence.

And let’s not forget the whole point of the show. You basically have two idiots who just love to have fun, and have adventures. Somewhere along the way they always faced evil, fought it, and solved it by dancing for no reason. No guns, no bombs, no race, no color, no gender…just dancing for no reason, and the problem is solved.

It’s cheesy, and it’s cliche but we need that kind of cheese and cliche in our real lives. We live in a world where terrible things happen to people that don’t deserve it, for reasons that we will never truly understand. We have horrible leaders, and businessmen who push us towards poverty and war to make their bottom lines look better. And we have nothing out there that gives us much hope.

Bill and Ted is that hope.

They could settle all their differences with each other, and with the bad guys in under 30 minutes, and had everyone come together. They pointed the mirror inward and looked at how ridiculous we were for the past year, with the crap that we made famous. They also propped up what made us amazing over the past year. It’s what we needed every single Halloween, a way to close out the year by completely making fun of it. It brought us up, and gave us closure.

Now Bill n Ted have returned to 1991. Yes, it will all be a dream to them, but to us it was real. We lived it together, and we have to take the lessons that they taught us and keep living them. Yes, Bill and Ted is just a show, based on just a movie. None of it’s real. They didn’t really go back to make the world a better place. They won’t make the world a better place.

Bill and Ted’s Excellent Halloween Adventures showed us what we are capable of. The family and talent that came together are all proof that the goodness is really in us. Yes, they’re all actors. Yes, everyone involved gets paid…but you don’t go through that kind of rigorous show for nights on end without loving it. And there’s where the spirit of Bill and Ted live on. That love and dedication.
We all can be Bill and Ted, and we can all do our parts to change the world. We don’t have to argue about politics. We can be a little nicer to a stranger (just a little), and we don’t have to give into hate or anger. Most importantly we can all dance for no reason.

Yeah, it’s silly…but it’s a hope. And if we all do one of those silly little things every day, we keep Bill and Ted alive no matter what comes next at HHN. Station.

So, to all of you I leave with the only thing I can.

Be excellent to each other…and Party on dudes.

Catch ya later Bill and Ted. 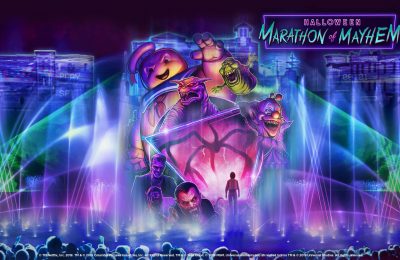